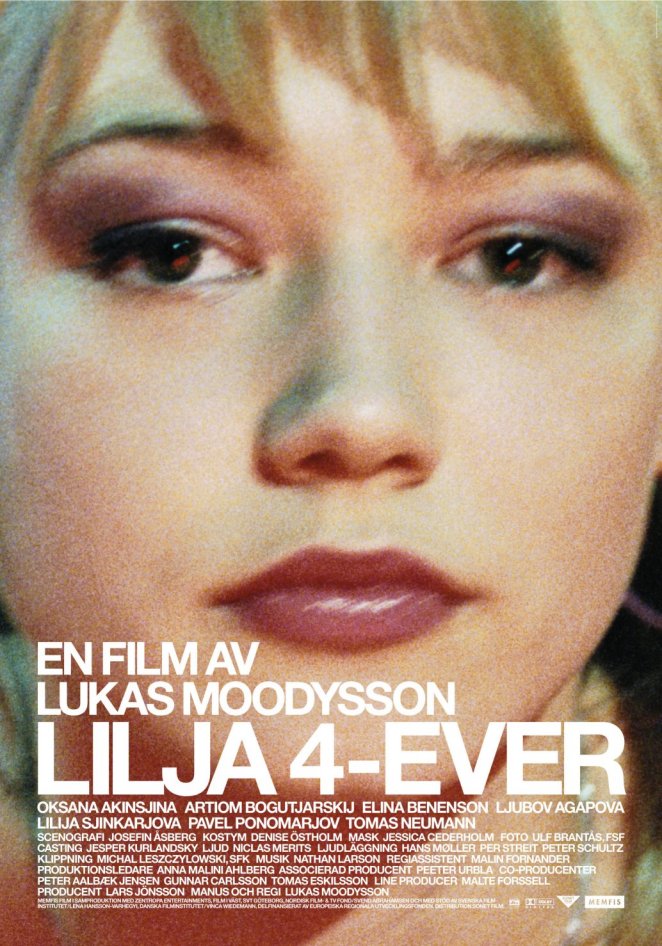 Lilja 4-ever is a drama film. It is Swedish director 's third full length film which marks a sharp change of mood from his previous two films, the uplifting love story "Show Me Love" and the 1970s comedy "Together". "Lilya 4-Ever" is an unremittingly brutal and realistic story of the downward spiral of Lilya (Oksana Akinshina), a girl in the former , whose mother abandons her to move to the . The story is based on the life of and examines the issue of and .

The film starts with a figure running desperately towards a motorway bridge, with a factory belching smoke in the background, to a soundtrack of "Mein Herz brennt" by . When the figure turns around the film introduces the audience to Lilya, who has recently been brutally beaten. The film reveals her past.

Lilya lives a fairly bleak life with her mother in a run down apartment block, but for all intents and purposes is a normal teenage girl (albeit an impoverished one). Lilya's mother tells her they are emigrating to the United States with her new boyfriend, but at the last minute Lilya is left behind, in the care of her aunt. A forced move into a squalid flat (while the Aunt moves herself into the larger, nicer flat that Lilya and her mother had lived in) is only the beginning, and a succession of miseries are heaped upon Lilya. Lilya's best friend encourages her to join her in prostituting herself for extra cash, though Lilya decides not to prostitute herself. However, when the friend's father finds the money the friend claims that she was the one who sat at the bar while Lilya prostituted herself. Not content with ruining Lilya's reputation at home, the story soon goes round school and results in a gang of boys from her neighborhood viciously raping her. As Lilya has been abandoned, she now really does have to prostitute herself for money to live. One glimmer of hope is her friend Volodya (), abused and rejected by his alcoholic father, with whom she forms a tender protective relationship. Another glimmer of hope is Andrei (), who becomes her boyfriend and offers her a job in . But all is not what it seems, and only bad things await Lilya when she arrives there.

After arriving in Sweden, she is greeted by her future "employer" (in reality, a pimp) and taken to a nearly empty apartment where he imprisons her. Lilya is raped by the pimp and she is then forced to perform sexual acts for her pimp's clients, while he reaps all the financial gain; all the abuse is seen from Lilya's point of view.

Meanwhile in the former Soviet Union, Volodya had committed , devastated that Lilya had abandoned him. Now Volodya's ghost comes to Lilya to look over her. On Christmas day, he transports Lilya to the roof of the apartment, and, in a moving scene, he gives Lilya the world as a present, but she simply finds it cold and unwelcoming. After one escape attempt Lilya is brutally beaten by her pimp, but she then escapes again with the help of Volodya's ghost. Finally, and much to the distress of Volodya's ghost (who regrets having killed himself) she commits suicide in the continuation of the scene from the beginning of the film by jumping from the bridge.

The film's conclusion shows Lilya and Volodya, now both dead, angelic and happily playing basketball on the roof of some tenement building, safe from all harm the world can do to them.

The film is set in an un-named 'former republic of the Soviet Union' (Estonian currency is used in one scene); the 'Soviet' scenes were filmed in — a former and base for the Soviet nuclear submarine fleet — and , both in . Paldiski became a bleak enclave for ethnic Russians, mostly dependents of members of the military, who were left behind when the military evacuated Estonia. While many characteristics of the ex-Soviet world are present, understanding the precarious position of these Russians as marginalised residents of Estonia makes the film even more compelling. The Swedish scenes were filmed in .

told audiences at the that he hoped the film would make them want to change the world for the better. Despite its bleak nature, Moodysson claims that the film is about the power of God, and shows how the human spirit clings to optimism even in the face of the most terrible adversity.

The film also arguably contains a criticism of capitalism after the Soviet collapse. Several times an image of the Virgin Mary appears on a wall behind Lilya next to a pornographic image (both of these being illegal in the U.S.S.R). Also, in a government building both Lilya and Volodya mention that their parents were employed there before the collapse of the Soviet Union and that they are now unemployed. Additionally Lilya states that her father was one of the soldiers stationed at the base and that he left when the base was closed leaving Lilya's mother to look after her alone. This is followed by Volodya reading a tribute to and the .

The film has been shown in various countries in Eastern Europe in campaigns to stop , in particular, women. In , The has shown it to 60,000 people. It was also shown at an anti-trafficking conference that took place in Israel in 2002, although Moodysson initially refused permission to show the film due to his anger at Israeli policies before reversing course and OK'ing the screening there.

*imdb title|id=0300140|title=Lilja 4-ever
* [http://www.indiewire.com/people/people_030423moody.html Interview with Lucas Moodysson about Lilya 4-ever]