Léon Joseph Marie Ignace Degrelle (Bouillon, 15 June 1906 – 31 March 1994) was a Walloon Belgian politician, who founded Rexism and later joined the Waffen SS (becoming a leader of its Walloon contingent) which were front-line troops in the fight against the Soviet Union. After World War II, he was a prominent figure in neo-nazi movements.

After studying at a Jesuit college and successfully studying for a law doctorate at the Université catholique de Louvain, Degrelle worked as a journalist for the conservative Roman Catholic periodical Christus Rex. During his time at this publication, he became attracted to the ideas of Charles Maurras and French Integralism. Until 1934, Degrelle worked as a correspondent for the paper in Mexico, during the Cristero War. He led a militant tendency inside the Catholic Party, which he formed around the Éditions de Rex he founded. The Éditions drew its name from the battle cry of the Cristeros: Viva Cristo Rey y Santa María de Guadalupe, alluding to Christ the King.

Degrelle's actions inside the Catholic Party saw him come into opposition with the mainstream of the same Party, many of whom were monarchist conservatives or centrists. The Rexist group, including the likes of Jean Denis, separated itself from the Catholic Party in 1935, after a meeting in Kortrijk. The newly formed party was heavily influenced by Fascism and Corporatism (but also included several elements interested solely in Nationalism or Ultramontanism); it had a vision of social equality that drew comparisons with Marxism, but was strongly anti-communist (anti-bolshevik). The party also came to denounce political corruption in Belgian politics. Drawing its support (in 1936, the peak of the votes for Rex), from Brussels (result of the votes expressed in percentage 18,50 %), Wallonia (15,16%), Flanders (7,01%), and German-speaking Community of Belgium (or the territory corresponding to this present-day Community) (26,44%),[1] Rexism had a Flemish ideological competitor in the Vlaamsch Nationaal Verbond which advocated an independent Flanders and exclusive use of the Dutch language.

In 1936, Degrelle met Benito Mussolini and Adolf Hitler, both of them providing Rexism with funds (2 million lire and 100,000 marks) and ideological support. Elections in that year had given the Parti Rexiste 21 deputies and 12 senators - though it was in decline by 1939, when it managed to win only 4 seats in each Chamber. The party progressively added Nazi-inspired Antisemitism to its agenda, and soon established contacts with fascist movements around Europe. Degrelle notably met with Falange leader José Antonio Primo de Rivera and the Iron Guard's Corneliu Zelea Codreanu. With the Fascist and Nazi elements within the party becoming increasingly dominant, its original social Catholic teachings and its Catholic identity were pushed increasingly to the background, and would virtually disappear later on, in the middle of World War II.

During this time (mid 1930s), Degrelle became acquainted with the cartoonist Hergé. In a volume published after his death (Tintin mon copain), the Rexist leader claimed that his years of journalism had inspired the creation of Tintin - ignoring Hergé's statements that the character was in fact based on his brother, Paul Rémi.[citation needed] 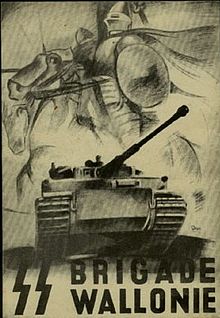 When the war began, Degrelle approved of King Leopold III's policy of neutrality. After Belgium was invaded by the Germans on 10 May 1940, the Rexist Party split over the matter of resistance. He was arrested as a suspected collaborator, and evacuated to France, being released by the Germans when the Occupation began. Degrelle returned to Belgium and proclaimed reconstructed Rexism to be in close union with Nazism - in marked contrast with the small group of former Rexists (such as Theo Simon and Lucien Mayer of the Catholic resistance) who had begun fighting against the Nazi occupiers from the underground. In August, Degrelle started contributing to a Nazi news source, Le Pays Réel (a reference to Charles Maurras).

He joined the Walloon legion of the Wehrmacht, which was raised in August 1941, to combat against the Soviet Union on the Eastern Front, and Degrelle himself joined it in combat (with leadership of the Rexists passing to Victor Matthys). Lacking any previous military service Degrelle was compelled to join as a private soldier, only later becoming an officer. Initially, the group was meant to represent a continuation of the Belgian Army, and fought as such during Operation Barbarossa - while integrating many Walloons that had volunteered for service. The Walloons were transferred from the Wehrmacht to the control of the Waffen SS in June 1943, becoming the 5th SS Volunteer Sturmbrigade Wallonien.

From 1940, the Belgian Roman Catholic hierarchy had banned all uniforms during Mass. On 25 July 1943, in his native Bouillon, Degrelle was told by Dean Rev. Fr. Poncelet to leave a Requiem Mass, as he was wearing his SS uniform, which Church authorities had strictly forbidden (due to their perception of the pagan nature of the SS). Degrelle was excommunicated, but the excommunication was later removed after confession by the Catholic chaplain of the Walloon Assault Brigade when it became clear that the unit was to be engaged on the Cherkassy frontline.[2]

Severely wounded at Cherkasy in 1944, Degrelle steadily climbed in the Schutzstaffel hierarchy after the inclusion of Walloons in the Waffen-SS, being made an SS-Obersturmbannführer (Lieutenant Colonel) in the early months of 1945. He received the Ritterkreuz (Knights Cross) from Hitler's hands (he later claimed Hitler told him "if I had a son, I wish he'd resemble you"). He was later awarded the oakleaves (mit Eichenlaub), a distinction earned by two other foreigners, the Estonian Alfons Rebane and the Spanish commander of the Blue Division Gen. Agustín Muñoz Grandes. 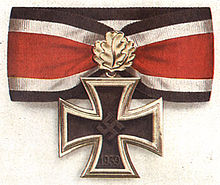 After Germany's defeat, Degrelle fled first to Denmark and eventually fled to Norway, where he commandeered a Heinkel He 111 aircraft,[3] allegedly provided by Albert Speer. He was severely wounded in a crash-landing on a beach in San Sebastian in Northern Spain. The government of Franco in Spain initially refused to hand him over to the Allies (or extradite him to Belgium) by citing his health condition. After further international pressures, Francisco Franco permitted his escape from hospital, while handing over a look-alike; in the meanwhile, José Finat y Escrivá de Romaní helped Degrelle obtain false papers. In 1954, in order to ensure his stay, Spain granted him Spanish citizenship under the name José León Ramírez Reina, and the Falange assigned him the leadership of a construction firm that benefitted from state contracts. Belgium convicted him of treason in absentia and condemned him to death by firing squad.

While in Spain, during the time of Franco, Degrelle maintained a high standard of living and would frequently appear in public and in private meetings in a white uniform featuring his German decorations, while expressing his pride over his close contacts and "thinking bond" with Adolf Hitler. He continued to live undisturbed when Spain became democratic after the death of Franco.

Degrelle continued publishing and polemicizing, voicing his support for far right solutions. He became active in the Neo-Nazi Círculo Español de Amigos de Europa (CEDADE), and led its printing press in Barcelona - where he published a large portion of his own writings, including an Open Letter to Pope John Paul II[4] on the topic of the Auschwitz concentration camp, the extermination purpose of which Degrelle called "one big fraud, Holy Father." His repeated negationist statements on the topic of Nazi genocide brought Degrelle to trial with Violeta Friedmann, a Romanian-born Venezuelan survivor of the camps; although the lower courts were initially favourable to Degrelle, the Supreme Court of Spain decided that he had brought offence to the memory of the victims, both Jews and non-Jews, and it sentenced him to pay a substantial fine. It was also decided that he should pay a fine for his Open Letter to Pope John Paul II as well.[1]

Asked if he had any regrets about the war, his reply was: "Only that we lost!"[5] In 1994, Degrelle died from cardiac arrest in a hospital in Málaga in Southern Spain.