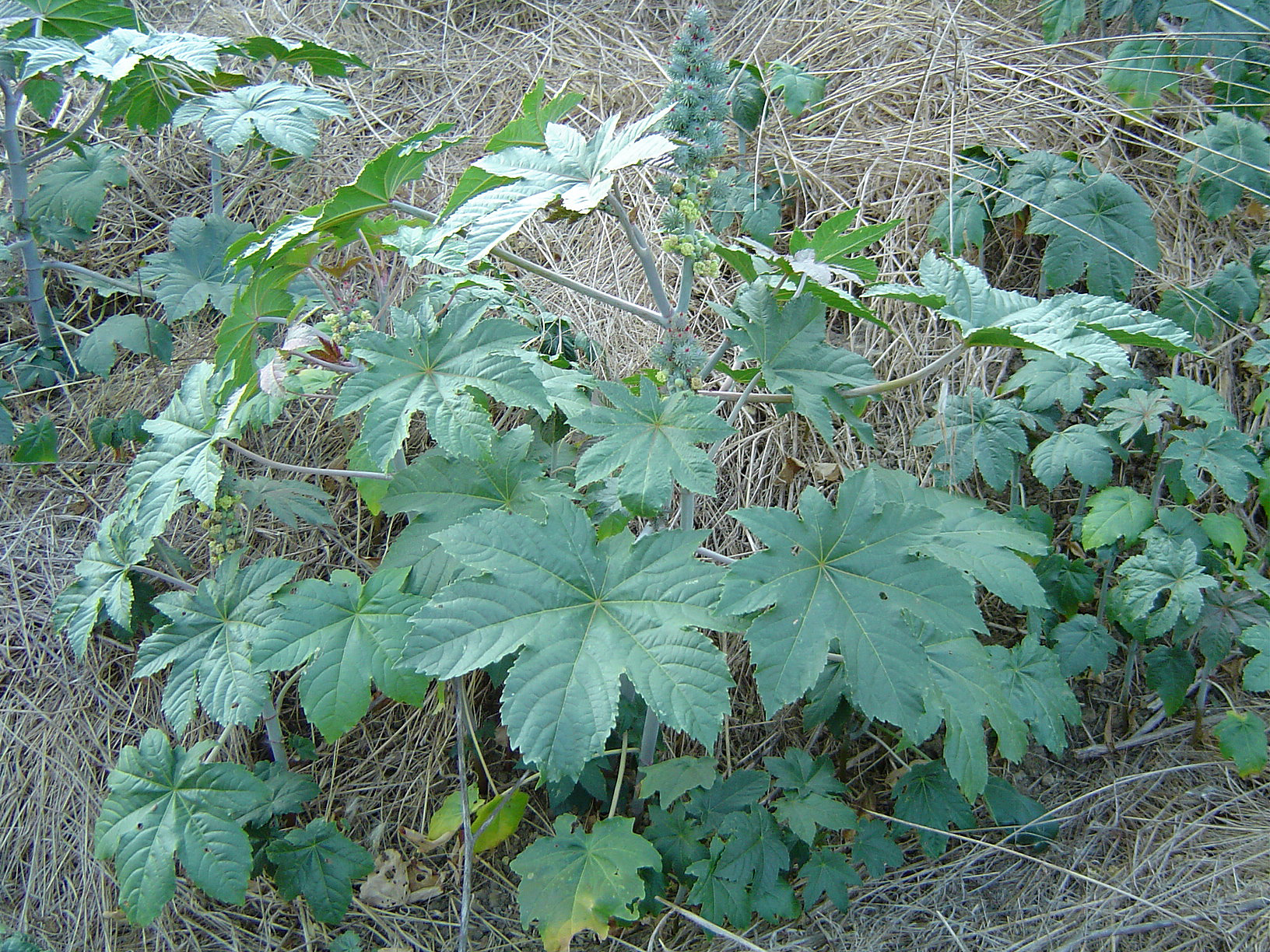 The castor oil plant, "Ricinus communis", is a of the (the evolution of this plant family is relatively unexplored [http://www.igs.umaryland.edu/?q=content/euphorbiaceae-spurge-genomics] ) the sole member of the "Ricinus" and of the Ricininae. Its seed is the castor bean which, despite its name, is not a true .

Castor seed is the source of , which has a wide variety of uses. The seeds contain between 40% and 60% oil that is rich in , mainly . The seed coat contains , a , which is also present in lower concentrations throughout the plant.

The toxicity of raw castor beans is well-known, and reports of actual poisoning are relatively rare. Children could conceivably die from as few as three beans; adults may require eight or more. As an example of the rarity of castor bean poisoning, in recent years there have only been two cases reported in all of England, and both the victims recovered uneventfully. [Wedin, G.P., Neal, J.S., Everson, G.W., and Krenzelok, E.P. 1986. "Castor bean poisoning." Am J Emerg Med. 4(3): 259-61. ( [http://www.ncbi.nlm.nih.gov/entrez/query.fcgi?itool=AbstractPlus&db=pubmed&cmd=Retrieve&dopt=abstractplus&list_uids=3964368 abstract] )]

Even so small a dose of ricin as 1/25 000 000 of the body weight may cause toxic symptoms when injected. [http://www.henriettesherbal.com/eclectic/bpc1911/ricinus.html]

Castor seeds have been found in Egyptian tombs dating back to 4000 BC. and other Greek travelers have noted the use of castor seed oil for lighting, body ointments, and improving hair growth and texture. is reputed to have used it to brighten the whites of her eyes. The is an ancient Egyptian medical treatise believed to date from 1552 BC. Translated in 1872, it describes castor oil as a purgative.

Global castor seed production is around 1 million tons per year. Leading producing areas are (with over 60% of the global yield), and . There are several active breeding programmes.

The glossy leaves are 15–45 cm long, long-stalked, alternate and palmate with 5–12 deep lobes with coarsely toothed segments. Their colour varies from dark green, sometimes with a reddish tinge, to dark reddish purple or bronze.

The stems and the spherical, spiny seed pods also vary in pigmentation. The pods are more showy than the flowers (the male flowers are yellowish-green with prominent creamy s and are carried in ovoid spikes up to 15 cm long; the female flowers, borne at the tips of the spikes, have prominent red stigmas). [ Brickell, Christopher (ed) "The Royal Horticultural Society A-Z Encyclopedia of Garden Plants" (1996) pp884–5, Dorling Kindersley, London, ISBN 0 7513 0303 8]

Terminating stems are panicle-like s of green monoecious flowers, the stalked female flowers above the male flowers below, both without petals.

The name "Ricinus" is a word for ; the seed is so named because it has markings and a bump at the end which resemble certain ticks.The common name "castor oil" likely comes from its use as a replacement for , a perfume base made from the dried glands of the ("castor" in Latin). It has another common name, Palm of Christ, or "Palma Christi", that derives from castor oil's ability to heal wounds and cure ailments.

Although castor is indigenous to the southeastern region, , and , today it is widespread throughout tropical regions. [Phillips, Roger & Rix, Martyn (1999) "Annuals and Biennials" p106, Macmillan, London, ISBN 0 333 74889 1] Castor establishes itself easily as an apparently "native" plant and can often be found on wasteland. It is widely grown as a crop in . It is also used extensively as a decorative plant in parks and other public areas, particularly as a "dot plant" in traditional bedding schemes. Of the red and white variety, the red is seen as an ornamental plant, the white is used medicinally.Although , the castor oil plant can vary greatly in its growth habit and appearance.

It is a fast-growing, suckering perennial which can reach the size of a small tree (around 12 m), but it is not hardy. However it grows well outside, at least in Southern England, and the leaves do not appear to suffer frost damage in sheltered spots, where it remains evergreen. In areas prone to it is usually shorter and grown as if it were an annual.

"Ricinus communis" is the host plant of the Common Castor butterfly ("") and the Castor Semi-Looper moth (""). It is also used as a food plant by the e of some other species of , including "Hypercompe hambletoni" and the Nutmeg ("").

Among s, it is a favourite food of the ("Turtur tympanistria").

Usage in ethnobotanyThe use of castor seed oil in has been documented since 2000 BC for use in lamps and in local medicine as a , , and in , and other systems. Traditional medicine considers castor oil the king of medicinals for curing arthritic diseases.

Castor seed and its oil have also been used in for centuries, mainly prescribed in local medicine for internal use or use in dressings.

The oil has , a powerful chemical for dermal fungus.

The oil is known to have been used as an instrument of coercion by the militia (Camicie Nere) under the regime of Italian dictator . Dissidents and regime opponents were forced to ingest the oil in large amounts, triggering severe and , which could ultimately cause death. This punishment method was originally thought of by , the Italian poet and Fascist supporter, during the First World War.

It was used in rituals of sacrifice to please the gods in early civilizations.

In Brazil, castor plants are abundant. The "fruits" are used by children as slingshot balls. Mamonas, as the fruits are called, serve perfectly as projectiles for slingshots since they have the right weight, size and hardness. Mamona oil is now being used to produce biodiesel in poor rural areas of the country.

is world leader in Castor Beans production followed by and then .