Windows 98 (codenamed Memphis) is a graphical operating system by Microsoft. It is the second major release in the Windows 9x line of operating systems. It was released to manufacturing on 15 May 1998 and to retail on 25 June 1998. Windows 98 is the successor to Windows 95. Like its predecessor, it is a hybrid 16-bit/32-bit[2] monolithic product with an MS-DOS based boot loader.[3] Windows 98 was succeeded by Windows 98 Second Edition on 5 May 1999, then by Windows Me (Millennium Edition) on 14 September 2000. Microsoft support for Windows 98 ended on 11 July 2006.

The Windows 98 shell includes all of the enhancements from Windows Desktop Update, an Internet Explorer 4 component, such as the Quick Launch toolbar, deskbands, Active Desktop, Channels, ability to minimize foreground windows by clicking their button on the taskbar, single click launching, Back and Forward navigation buttons, favorites, and address bar in Windows Explorer, image thumbnails, folder infotips and web view in folders, and folder customization through HTML-based templates.

Windows 98 also integrates shell enhancements, themes and other features from Microsoft Plus! for Windows 95 such as DriveSpace 3, Compression Agent, Dial-Up Networking Server, Dial-Up Scripting Tool and Task Scheduler. 3D Pinball is included on the CD-ROM but not installed by default. Windows 98 had its own separately purchasable Plus! pack called Plus! 98.

Windows 98 was the first operating system to use the Windows Driver Model (WDM). This fact was not well publicised when Windows 98 was released, and most hardware producers continued to develop drivers for the older VxD driver standard, which Windows 98 also supported. The WDM standard only achieved widespread adoption years later, mostly through Windows 2000 and Windows XP, as they are not compatible with the older VxD standard.[5] Windows Driver Model was introduced largely so that developers would write source compatible drivers for all future versions of Windows. Device driver access in WDM is actually implemented through a VxD device driver, NTKERN.VXD which implements several Windows NT-specific kernel support functions. NTKERN creates IRPs and sends them to WDM drivers.

Windows Driver Model also includes Broadcast Driver Architecture, the backbone for TV technologies support in Windows. WebTV for Windows utilized BDA to allow viewing television on the computer if a compatible TV tuner card is installed. TV listings could updated from the Internet and WaveTop Data Broadcasting allowed extra data about broadcasts to be received via regular television signals using an antenna or cable, by embedding data streams into the vertical blanking interval (VBI) portion of existing broadcast television signals.

Windows 98 introduced ACPI 1.0 support which enabled Standby (ACPI S3) and Hibernate (ACPI S4) states. However, hibernation support was extremely limited, and vendor-specific. Hibernation was only available if compatible (PnP) hardware and BIOS are present, and the hardware manufacturer or OEM supplied compatible WDM drivers, non-VxD drivers. However, there are hibernation issues with the FAT32 file system,[8] making hibernation problematic and unreliable.

Windows 98, in general, provides improved—and a broader range of—support for IDE and SCSI drives and drive controllers, floppy drive controllers and all other classes of hardware than Windows 95.[8] There is integrated Accelerated Graphics Port (AGP) support (The USB Supplement to Windows 95 OSR2 and later releases of Windows 95 did have AGP support). Windows 98 has built-in DVD support and UDF 1.02 read support. The Still imaging architecture (STI) with TWAIN support was introduced for scanners and cameras and Image Color Management 2.0 for devices to perform color space transformations. Multiple monitor support allows using up to 8 multiple monitors and/or multiple graphics adapters on a single PC. Windows 98 shipped with DirectX 5.2 which notably included DirectShow. Windows 98 Second Edition shipped with DirectX 6.1.

The DHCP client has been enhanced to include address assignment conflict detection and longer timeout intervals. NetBT configuration in the WINS client has been improved to continue persistently querying multiple WINS servers if it failed to establish the initial session until all of the WINS servers specified have been queried or a connection is established.

For networked computers that have user profiles enabled, Windows 98 introduces Microsoft Family Logon which lists all users that have been configured for that computer, enabling users to simply select their names from a list rather than having to type it in. The same feature can be added to Windows 95 if Internet Explorer 4.0 is installed.

Windows 98 supports IrDA 3.0 that specifies both Serial Infrared Devices (SIR) and Fast Infrared (FIR) devices, which are capable of sending and receiving data at 4 Mbit/s. Infrared Recipient, a new application for transferring files through an infrared connection is included. The IrDA stack in Windows 98 supports networking profiles over the IrCOMM kernel-mode driver. Windows 98 also has built-in support for browsing DFS trees on SMB shares.

Improvements to the system and built-in utilities

Windows 95 introduced the 32-bit, protected-mode cache driver, VCACHE replacing SMARTDrv to cache the most recently accessed information from the hard drive in memory, divided into chunks. However, the cache parameters needed manual tuning as it degraded performance by consuming too much memory and not releasing it quickly enough, forcing paging to occur far too early. The Windows 98 VCACHE cache size management for disk and network access, CD-ROM access and paging is more dynamic compared to Windows 95 resulting in no tuning required for cache parameters. [11] On the FAT32 file system, Windows 98 has a MapCache performance feature that can run applications from the disk cache itself if the code pages of executable files are aligned/mapped on 4K boundaries, instead of copying them to virtual memory. This results in more memory being available to run applications, and lesser usage of the swap file.

WinAlign (Walign.exe and Winalign.exe) are tools designed to optimize the performance of executable code (binaries). WinAlign aligns binary sections along 4 KB boundaries, aligning the executable sections with the memory pages. This allows the Windows 98 MapCache feature to map directly to sections in cache[12] Walign.exe is included in Windows 98 for automatically optimizing Microsoft Office programs. Winalign.exe is included in the Windows 98 Resource Kit to optimize other programs.

Disk Defragmenter has been improved to rearrange program files that are frequently used to a hard disk region optimized for program start.[13]

A number of improvements are made to various other system tools and accessories in Windows 98. Microsoft Backup supports differential backup and SCSI tape devices in Windows 98. Disk Cleanup, a new tool, enables users to clear their disks of unnecessary files. Cleanup locations are extensible through Disk Cleanup handlers. Disk Cleanup can be automated for regular silent cleanups.

Scanreg (DOS) and ScanRegW are Registry Checker tools used to back up, restore or optimize the Windows registry. ScanRegW tests the registry's integrity and saves a backup copy each time Windows successfully boots. The maximum amount of copies could be customized by the user through "scanreg.ini" file. The restoration of a registry that causes Windows to fail to boot can only be done from DOS mode using ScanReg.

System Configuration Utility (also known as Msconfig) is a new system utility used to disable programs and services that are not required to run the computer. A Maintenance Wizard is included that schedules and automates ScanDisk, Disk Defragmenter and Disk Cleanup. Windows Script Host, with VBScript and JScript engines is built-in and upgradeable to version 5.6.

System File Checker checks installed versions of system files to ensure they were the same version as the one installed with Windows 98 or newer. Corrupt or older versions are replaced by the correct versions. This tool was introduced to resolve the DLL hell issue and was replaced in Windows Me by System File Protection.

The Windows 98 Startup Disk contains generic, real-mode ATAPI and SCSI CD-ROM drivers and has been preconfigured to automatically start MS-DOS mode with CD-ROM support enabled. For computers without an operating system and that do not support booting from optical drives, the Startup disk can be used to boot into MS-DOS and automatically start Windows 98 setup from the CD.

Windows 98 includes an improved version of the Dr. Watson utility that collects and lists comprehensive information such as running tasks, startup programs with their command line switches, system patches, kernel driver, user drivers, DOS drivers and 16-bit modules. With Dr. Watson loaded in the system tray, whenever a software fault occurs (general protection fault, hang, etc.), Dr. Watson will intercept it and indicate what software crashed and its cause. All of the collected information is logged to the \Windows\DrWatson folder.

Windows Report Tool takes a snapshot of system configuration and lets users submit a manual problem report along with system information to technicians. It has e-mail confirmation for submitted reports. The system could be updated using Windows Update. A utility to automatically notify of critical updates was later released. 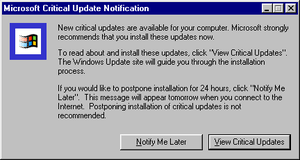 A Critical Update Notification in Windows 98

Users can configure the font in Notepad. Microsoft Paint supports GIF transparency. HyperTerminal supports a TCP/IP connection method allowing it to be used as a Telnet client. Imaging for Windows is updated. System Monitor supports output to a log file. 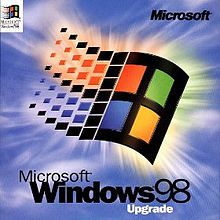 Windows 98 Second Edition (often shortened to SE) is an updated release of Windows 98, released on 5 May 1999. It includes fixes for many minor issues, improved WDM audio and modem support, improved USB support, the replacement of Internet Explorer 4.0 with Internet Explorer 5.0 and related shell updates. Also included is basic OHCI-compliant FireWire (IEEE 1394a) DV camcorder support (MSDV class driver) and SBP-2 support for mass storage class devices [17], Wake-On-LAN support (if ACPI compatible NDIS drivers are present) and Internet Connection Sharing, which allows multiple computers on a LAN to share a single Internet connection through Network Address Translation. Other features in the update include DirectX 6.1 which introduced major improvements to DirectSound and the introduction of DirectMusic, improvements to Asynchronous Transfer Mode support (IP/ATM, PPP/ATM and WinSock 2/ATM support), Windows Media Player 6.2 replacing the older Media Player, Microsoft NetMeeting 3.0, MDAC 2.1 and WMI. A memory overflow issue was resolved which in the older version of Windows 98 would crash most systems if left running for 49.7 days (equal to 2³² milliseconds).[18] Windows 98 SE could be obtained as retail upgrade and full version packages, as well as OEM and a Second Edition Updates Disc for existing Windows 98 users. Windows 98 Second Edition did not ship with the WinG API or RealPlayer 4.0 unlike the original release of Windows 98, both of these being superseded by DirectX and Windows Media Player. 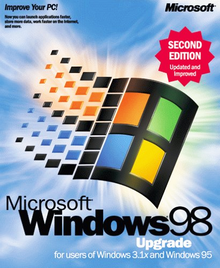 Several components of the Windows 98 original release and Windows 98 Second Edition, can be updated to newer versions. They include:

The release of Windows 98 was preceded by a notable press demonstration at Comdex in April 1998. Microsoft CEO Bill Gates was highlighting the operating system's ease of use and enhanced support for Plug and Play (PnP). However, when presentation assistant Chris Capossela plugged a scanner in and attempted to install it, the operating system crashed, displaying a Blue Screen of Death. Gates remarked after applause and cheering from the audience, "That must be why we're not shipping Windows 98 yet." Video footage of this event became a popular Internet phenomenon.[21]

Microsoft planned to discontinue its support for Windows 98 versions on January 16, 2004. However, due to the continued popularity of the operating system (27% of Google's pageviews were on Windows 98 systems during October–November, 2003),[22] Microsoft decided to maintain support until July 11, 2006. Support for Windows Me also ended on this date.[23] By that time, Windows 98 market share had diminished to 2.7%.[24] Windows 98 is no longer available from Microsoft in any form due to the terms of Java-related settlements Microsoft made with Sun Microsystems.[25]

Like its predecessor, Windows 95, and its successor, Windows Millennium Edition (Me), users can bypass hardware requirement checks with the undocumented /im setup switch. This allows installation on computers with processors as old as the 80386.