Therefore, although the concept of viscosity is commonly used in fluid mechanics to characterize the shear properties of a fluid, it can be inadequate to describe non-Newtonian fluids. They are best studied through several other rheological properties which relate stress and strain rate tensors under many different flow conditions, such as oscillatory shear, or extensional flow which are measured using different devices or rheometers. The properties are better studied using tensor-valued constitutive equations, which are common in the field of continuum mechanics. 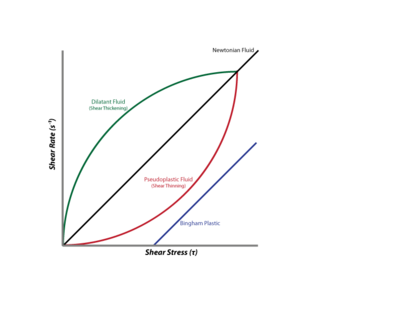 A familiar example of the opposite, a shear thinning fluid, or pseudoplastic fluid, is paint: one wants the paint to flow readily off the brush when it is being applied to the surface being painted, but not to drip excessively.

There are fluids which have a linear shear stress/shear strain relationship which require a finite yield stress before they begin to flow (the plot of shear stress against shear strain does not pass through the origin). These fluids are called Bingham plastics. Several examples are clay suspensions, drilling mud, toothpaste, mayonnaise, chocolate, and mustard. The surface of a Bingham plastic can hold peaks when it is still. By contrast Newtonian fluids have flat featureless surfaces when still. 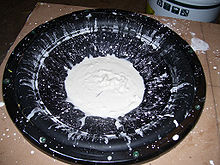 Oobleck on a subwoofer. Applying force to oobleck, by sound waves in this case, makes the non-Newtonian fluid thicken.[6]

An inexpensive, non-toxic example of a non-Newtonian fluid is a suspension of starch (e.g. cornstarch) in water, sometimes called "oobleck" or "ooze" (1 part of water to 1.5–2 parts of corn starch).[7][8] Uncooked imitation custard, being a suspension of primarily cornflour, has the same properties. The name "oobleck" is derived from the children's book Bartholomew and the Oobleck.

Flubber is a non-Newtonian fluid, easily made from polyvinyl alcohol based glues and borax, that flows under low stresses, but breaks under higher stresses and pressures. This combination of fluid-like and solid-like properties makes it a Maxwell solid. Its behaviour can also be described as being viscoplastic or gelatinous.[9]

Another example of this is chilled caramel ice cream topping. The sudden application of force—for example by stabbing the surface with a finger, or rapidly inverting the container holding it—leads to the fluid behaving like a solid rather than a liquid. This is the "shear thickening" property of this non-Newtonian fluid. More gentle treatment, such as slowly inserting a spoon, will leave it in its liquid state. Trying to jerk the spoon back out again, however, will trigger the return of the temporary solid state. A person moving quickly and applying sufficient force with their feet can literally walk across such a liquid.

Silly Putty is a silicone polymer based suspension which will flow, bounce, or break depending on strain rate.

Ketchup is a shear thinning fluid.[3] Shear thinning means that the fluid viscosity decreases with increasing shear stress. In other words, fluid motion is initially difficult at slow rates of deformation, but will flow more freely at high rates.