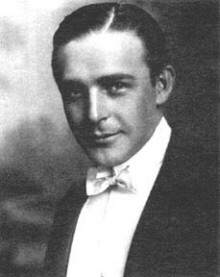 Wallace Reid (, – , ) was an actor in referred to by "Motion Picture Magazine" as "the screen's most perfect lover".

Born William Wallace Reid in into a show business family, his mother Bertha Westbrook was an actress and his father, (1860-1920), worked successfully in a variety of theatrical jobs, travelling the country. As a boy, Wallace Reid was performing on stage at an early age but acting was put on hold while he obtained an education at in . A gifted all-around athlete, Reid participated in a number of sports while also following an interest in music, learning to play the piano, banjo, drums, and the violin. As a teenager, he spent time in where he learned to be an outdoorsman.

Reid was drawn to the burgeoning motion picture industry by his father who would shift from the theatre to acting, writing, and directing films. In 1910, a 19-year-old Wallace Reid appeared in his first motion picture called "The Phoenix", an adaptation of a play filmed at in . Hooked on making films, Reid used the script from a play his father had written and approached the very successful hoping to be given the opportunity to direct. Instead, Vitagraph executives capitalized on his sex appeal and in addition to having him direct, they cast him in a major role. Although Reid's good looks and powerful physique made him the perfect "matinee idol," he was equally happy with roles behind the scenes and often worked as a writer, cameraman, and director.Wallace Reid appeared in several films with his father and as his career in film flourished, he was soon acting and directing with and for early film mogul, . In 1913, while at , Reid met and married actress (1895-1977). He was featured in both "" (1915) and "Intolerance" (1916) both directed by , and starred opposite leading ladies such as , , , , and en route to becoming one of 's major heartthrobs.

Already involved with the creation of more than a hundred motion picture shorts, Reid was signed by producer and would star in another sixty plus films for Lasky's film company, later . The tone of these movies can be assumed by a comment in and 's book , that a daredevil "was going to die with a smile on his lips, like Wallace Reid." Frequently paired with actress , his action hero role as the dashing race car driver saw young girls and older women alike flocking to theaters to see his daredevil auto thrillers such as, "" (1919), "" (1920), "" (1920), and "" (1921). One of his auto racing films, "" (1922), was chosen as the opening night film for San Francisco's , which opened .

However, while working on location in making "" (1919), Reid was injured in a and in order to keep on filming he was prescribed for his pain. The powerful drug almost immediately led to a deadly addiction but Reid kept on working at a frantic pace in films that were growing more physically demanding and changing from 15-20 minutes in duration to as much as an hour. Reid's morphine dependency deepened at a time when proper help for any form of addiction was non-existent. By late 1922, his health had deteriorated badly and after contracting the flu, he fell into a coma from which he never recovered.

Dead at age thirty-one, Wallace Reid was interred in the Forest Lawn Memorial Park Cemetery in .

Unlike the self-destructive behavior of other stars of that era such as , , and whose death resulted from drugs and/or alcohol abuse, historical records point to Wallace Reid being a victim of medical ignorance. A happy, well-adjusted man, he had been close to his parents and was dedicated to his wife and children. Beyond the adoration of moviegoers, Wallace Reid was admired and respected by fellow actors as well as the studio executives who employed him. Deaths like his were almost always covered up by the film studios. However, his widow Dorothy Davenport (billed as Mrs. Wallace Reid) co-produced and appeared in "" (1923), making a national tour with the film to publicize the dangers of drug addiction.

Wallace Reid's contribution to the motion-picture industry has been recognized with a star on the .