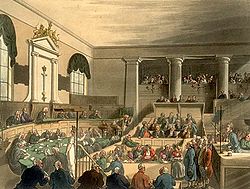 A trial at the Old Bailey in London as drawn by Thomas Rowlandson and Augustus Pugin for Ackermann's Microcosm of London (1808-11).

A court is a form of tribunal, often a governmental institution, with the authority to adjudicate legal disputes between parties and carry out the administration of justice in civil, criminal, and administrative matters in accordance with the rule of law.[1] In both common law and civil law legal systems, courts are the central means for dispute resolution, and it is generally understood that all persons have an ability to bring their claims before a court. Similarly, the rights of those accused of a crime include the right to present a defense before a court.

The system of courts that interpret and apply the law are collectively known as the judiciary. The place where a court sits is known as a venue. The room where court proceedings occur is known as a courtroom, and the building as a courthouse; court facilities range from simple and very small facilities in rural communities to large buildings in cities.

The practical authority given to the court is known as its jurisdiction (Latin jus dicere) -- the court's power to decide certain kinds of questions or petitions put to it. According to William Blackstone's Commentaries on the Laws of England, a court is constituted by a minimum of three parties: the actor or plaintiff, who complains of an injury done; the reus or defendant, who is called upon to make satisfaction for it, and the judex or judicial power, which is to examine the truth of the fact, to determine the law arising upon that fact, and, if any injury appears to have been done, to ascertain and by its officers to apply a legal remedy. It is also usual in the superior courts to have attorneys, and advocates or counsel, as assistants,[2] though, often, courts consist of additional attorneys, bailiffs, reporters, and perhaps a jury.

The term "the court" is also used to refer to the presiding officer or officials, usually one or more judges. The judge or panel of judges may also be collectively referred to as "the bench" (in contrast to attorneys and barristers, collectively referred to as "the bar"). In the United States, and other common law jurisdictions, the term "court" (in the case of U.S. federal courts) by law is used to describe the judge himself or herself.[3]

In the United States, the legal authority of a court to take action is based on personal jurisdiction, subject-matter jurisdiction, and venue over the parties to the litigation.

The word cour comes from the French court, an enclosed yard, which derives from the Latin form cortem, the accusative case of cohors, which again means an enclosed yard or the occupants of such a yard. The words yard, court, and Latin hortus (meaning "garden," hence horticulture and orchard), are cognates—all referring to an enclosed space.[4]

The meaning of a judicial assembly is first attested in the 12th century, and derives from the earlier usage to designate a sovereign and his entourage, which met to adjudicate disputes in such an enclosed yard. The verb "to court", meaning to win favor, derives from the same source since people traveled to the sovereign's court to win his favor.[5][6]

Jurisdiction, means "to speak the law," is the power of a court over a person or a claim. In the United States, a court must have both personal jurisdiction and subject matter jurisdiction. Each state establishes a court system for the territory under its control. This system allocates work to courts or authorized individuals by granting both civil and criminal jurisdiction (in the United States, this is termed subject-matter jurisdiction). The grant of power to each category of court or individual may stem from a provision of a written constitution or from an enabling statute. In English law, jurisdiction may be inherent, deriving from the common law origin of the particular court.

Appellate courts are courts that hear appeals of lower courts and trial courts.

Types and organization of courts