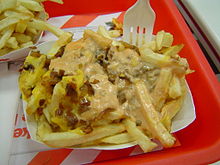 'Animal Fries' consisting of cheese, grilled onions, and spread on a regular order of fries at In-N-Out Burger, part of their "secret" menu.

Cheese fries are a popular fast food dish consisting of french fries covered in cheese, similar to the French-Canadian snack poutine, which is fries, cheese curds and brown gravy.