Banaras Hindu University (Hindi: काशी हिन्दू विश्वविद्यालय) (commonly referred to as BHU) is a public university located in Varanasi, India and is one of the Central Universities of India. It is the largest residential university in Asia, with over 24,000 students in its campus. BHU was founded in 1916 by Pandit Madan Mohan Malviya under the Parliamentary legislation 'B.H.U. Act 1915'.[1][2][3]

The campus spread over 1350 acres (5.5 km²) was built on land donated by the Kashi Naresh, the hereditary ruler of Banaras. Apart from the main campus, the Rajiv Gandhi South Campus covering 2,760-acre (11.2 km2) is at Barkatcha near the city of Mirzapur, about 80 kilometers from Banaras.

It has 140 teaching departments and more than 55 hostels for boys and girls. The total enrollment in the university stands at just over 15000, including students from all over India and abroad. Several of its colleges, including engineering (IT-BHU), science, linguistics, journalism & mass communication, law and medicine (IMS-BHU), Faculty of Management Studies, are ranked amongst the best in India.[4] Out of these IT-BHU is set to become India's 16th IIT, IIT-BHU from the academic session 2010.[5][6] Also, the university is well known for its Department of French studies which offers degree and diploma courses. BHU is ranked as the second best university in the field of research in India after Delhi University.[7] It is also ranked as the best overall university of India on all parameters as per the India Today magazine dated 2 June 2010.[8] 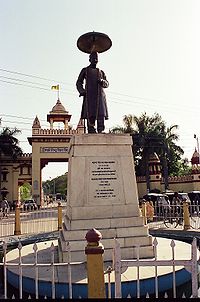 In 1898 Annie Besant founded the Central Hindu School in Varanasi and introduced the idea that there should be learning institutions based on ancient Hindu philosophy.[9] Malaviya supported this idea and starting in 1911 he left his legal practice and sought to organize a larger university using the Central Hindu School as a base.[citation needed] Besant proposed that the British crown found a "University of India" and in 1907 applied for a royal charter to establish such an institution.[citation needed] Malaviya sought and received the support of the Kashi Naresh and the Maharaja Sir Rameshwar Singh Bahadur to establish the university.[9] In April 1911, Besant and Malaviya met and decided to unite their forces and work for a common Hindu University at Varanasi.[10] The Government of India offered funding if Besant's Central Hindu College would become part of the new university, and Besant, Bhagwan Das, and other college trustees agreed to the merge in November 1915.[citation needed]

In February 1916 to promote the university's expansion guest speakers such as Mahatma Gandhi, Sir J.C. Bose, Dr. PC. Ray, Prof. Sam Higginbottom, Besant, Prof. C. V. Raman, delivered a series of what are now called the University Extension Lectures on Vasant Panchami. Sir Sundar Lal was appointed the first Vice-Chancellor.[citation needed] The Chancellor of the University, Maharaja Krishna Raja Wadiyar IV of Mysore who had come to preside over and address the Convocation, also performed the opening ceremony of the Engineering College Workshop buildings. Krishna Raja Wadiyar IV of Mysore presided over the first university convocation on 17 January 1919, and at this time he also announced the opening of the first college on the campus, which was the Engineering College.[citation needed]

Being a vast university and under various phases of development, Banaras Hindu University has two main types of academic subunits: Institute and Faculty.[4]

The Institute of Medical Sciences is a residential, co-educational medical institute. It admits undergraduate (MBBS/BAMS/BDS) students through the BHU-PMT entrance examination held by BHU in cities of India. The B.Sc.(Nursing), B Pharma ( Ay),M Pharma ( Ay) MDS, MD/MS, DM/M.Ch, MD.(Ay)/MS(Ay)and Ph.D students are selected through national entrance tests held by BHU in Varanasi. The M.Sc. (Health Statistics) students are admitted through a common post-graduate entrance test conducted by BHU in cities of India.

Institute of Environment and Sustainable Development The School of Biotechnology is a centre of Postgraduate teaching and Research under the aegis of Faculty of Science[12] at Banaras Hindu University (BHU), Varanasi, India. It is one of the earliest centres established by Department of Biotechnology[13], Ministry of Science and Technology, Government of India in year 1986. It offers M.Sc. and Ph.D. programmes in Biotechnology. Notable faculty include Arvind Mohan Kayastha.[14]

Apart from specialized centers directly funded by DBT, DST,ICAR and ISRO, a large number of departments under the faculty of sciences, Engineering, Technology and Social Sciences are supported by DST-FIST (22 departments/schools), and UGC CAS/SAP/DRS (14 departments/schools).[6] 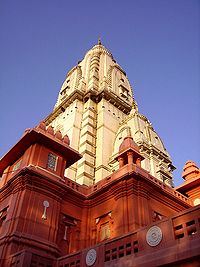 Department of Library and Information Science

Department of Library and Information Science was established in 1941 and is among the oldest Library and Information Science schools in India and provides an education for librarianship in India. The department has established a national and international reputation in its field.[who?] It started as a two-month course of Librarianship which lead to a six-month certificate course in Librarianship later that year. The department initiated diploma course in Librarianship, second of its kind in India after Madras University in 1942. In 1961, the diploma course was converted to a bachelor degree course with necessary modifications in course content. The course has been discontinued from 2005 onward. Department introduced a one-year Master of Library and Information Science (MLIS) Programme in the 1965 second after University of Delhi in order to train specialist librarians for specialized libraries. From 2005 onwards the department has introduced a two-year integrated MLIS programme as per guidelines of Curriculum Development Committee (CDC) of the University Grant Commission (UGC). A Ph.D. course was initiated in the department in 1980. Nineteen doctoral dissertations so far have been successfully defended for the award of Doctor of Philosophy. The department has recently[when?] started a special course of study M.A. (Manuscriptology) which aims to provide education and training of handling manuscripts — storage, preservation, conservation, study and use.

Admission to the MLIS course is based on the merit acquired by a candidate in an entrance test conducted by B.H.U. administration annually. Applicants need a graduate degree under 10+2+3 pattern from any Indian university/institution recognized by U.G.C. with at least 50% marks in aggregate (at least 45% for SC/ST candidates). A candidate appearing at the qualifying examination and expecting to fulfill the eligibility requirements as above may also apply. Programs include masters degrees in Library and Information Science and Manuscriptology, and a PhD research program.

The Banaras Hindu University Library system was established from a collection donated by Prof. P.K. Telang in the memory of his father Justice Kashinath Trimbak Telang in 1917. The collection was housed in the Telang Hall of the Central Hindu College, Kamachha. In 1921 the library was moved to the Central Hall of the Arts College (now Faculty of Arts) and then in 1941 to its present building. The library was established with the donation from Maharaja Sayajirao Gaekwad III of Baroda, on the pattern of the library British Museum in London on the suggestion of Pandit Madan Mohan Malaviya, the founder of university. It is also a designated 'Manuscript Conservation Centre' (MCC) under the National Mission for Manuscripts established in 2003.[15]

The library had a collection of around 60,000 volumes in 1931, through donations from various sources. The trend of donation of personal and family collection to the library continued as late as forties with the result that it has unique pieces of rarities of books and journals dating back to 18th century.

As a major university, Banaras Hindu University has had many notable people associated with it from all fields.