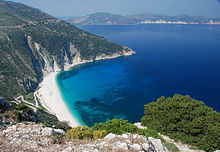 The beach as seen from the coast road 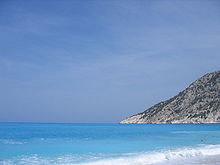 The sea has a bright turquoise colour 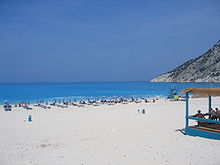 A small taverna, lifeguards, and sunbeds are available

The colour of real turquoise, for comparison 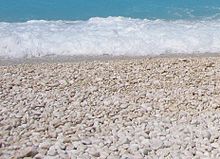 Myrtos beach is made up of smooth white pebbles

Myrtos Beach (Παραλία Μύρτου) is situated in the region of Pylaros, in the north-west of Kefalonia, Greece. The beach is situated between the feet of two mountains, Agia Dynati and Kalon Oros (901m) . This can be seen in Google Maps [1]

Myrtos is world-famous for the magical colours of the water (from sky-blue to dark blue, green-blue and turquoise) contrasting with the bright white of the smooth marble pebbles from which it is formed.

In the evening when the sun is on the horizon, the water is tinted by magnificent colours, (red, yellow, purple, orange), as the sun disappears[2]. The location of the beach, with steep mountains and tall cliffs behind, is imposing and magical.

For all these reasons Myrtos has previously been voted 12 times the best Greek beach[3][4] and has been quoted in one or more of the published top-ten beaches of the world lists (There are many such lists and Myrtos is not cited in the majority of lists which originate outside Europe, but is included in more of the lists that originate in Europe). It is cited as No 36 in the world in one widely used travel website [5]. Myrtos Beach was also identified as a priority destination in a SEPT 2008 review in the Telegraph Newspaper(UK)[6]

When walking around, some footwear such as flip-flops is advised because of the pebbles. There is a steep drop-off at the shore which, at times, can be associated with a significant undertow that can be disconcerting to someone who is not a strong swimmer. Most adults become out of their depth within about ten feet of the shoreline.

The surrounding sediment at Myrtos Beach is generally made up of marble, a metamorphosed limestone. The beach is made up of round, white cobblestones which decrease in size to that of a small pebble. The sediment gradually becomes smaller as you approach the shoreline. Because the slope angle has an abrupt drop near the edge of the shoreline the wave energy that is continually acting on Myrtos Beach is very high. This wave action is what causes the gradation trends from cobbles to pebbles along the beach.

Longshore drift, along with wave energy, has an effect on the beauty of this beach. As waves curve along the beach they also pick up the finest bits of marble; this creates what is known as sediment plumes. These plumes follow the curve of the beach with the direction of the waves making the water a brilliant shade of turquoise, well seen in the satellite image on Google Maps[7]. Because of the strength of the waves they carry the plume out past the headlands. Then wave refraction takes over pulling the plumes back into the bay, which is what creates the beautiful anchor shape.

A well-made steep winding road, about two km in length and with hairpin bends, leads down to the beach from the village of Divarata.

During the high tourist season in the summer, the Municipality of Pylaros runs a public bus service (Nos 3 & 6) to and from Myrtos Beach, which departs from the harbour area in Agia Efimia. The Timetables can be found from Tourist Information offices in Agia Efimia and may be found online. The bus stops on the road leading down to the beach, leaving a five minute walk down. There is a small bus shelter to keep out of the sun when waiting to return. Most people seem to arrive by car rather than public transport.

At the end of the road, car parking is located immediately at the base of the cliffs at the edge of the beach[8]. Modernization is ongoing and a system is developing where people arriving turn right onto a new track at the end of the road, leading down to the beach[9]. Once on the beach, to leave, people turn left and come back up an older track.

There is a single beach bar serving drinks and light snacks. There are several Tavernas at the top of the road which leads down to the beach in the village of Divarata, and many people choose to eat here, having spent time on the beach. Others choose to drive further and eat at Assos.

Beach loungers and umbrellas are for hire[10]