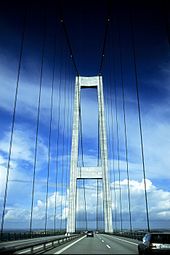 Transport in Denmark is developed and modern. The motorway network now covers 1,111 km[1] while the railway network totals 2,667 km of operational track.[2] The Great Belt Fixed Link (opened in 1997) connecting the islands of Zealand and Funen and the New Little Belt Bridge (opened in 1970) connecting Funen and Jutland have improved the traffic flow across the country on both motorways and rail. The airports of Copenhagen and Billund provide a variety of domestic and international connections while ferries provide services to the Faroe Islands, Greenland, Iceland, Germany, Sweden, Norway and the United Kingdom as well as routes to the Danish islands. The railway system is connected to Sweden by bridge in Copenhagen and ferry in Helsingør and Frederikshavn, by land to Germany in Padborg and ferry in Rødby and to Norway by ferry in Hirtshals. 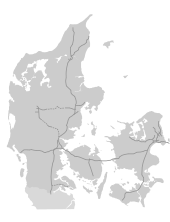 The road network in 2008 totalled 73,197 km of paved road, including 1,111 km of motorway.[4] Motorways are toll-free except for the Great Belt Bridge joining Zealand and Funen and the Øresund Bridge linking Copenhagen to Malmö in Sweden.

Bicycling in Denmark is a common and popular recreational and utilitarian activity. Bicycling infrastructure is a dominant feature of both city and countryside infrastructure with bicycle paths and bicycle ways in many places and an extensive network of bicycle routes extending more than 12,000 kilometres (7,500 mi) nationwide[5] (in comparison Denmark's coastline is 7,314 kilometres (4,545 mi)). As a unique thing, Denmark has a VIN-system for bicycles which is mandatory by law. Often bicycling and bicycle-culture in Denmark is compared to the Netherlands as a bicycle-nation. Aalborg airport in the north of Jutland

Copenhagen Airport is the largest airport in Scandinavia, handling 9,691,000 departing passengers per year (2008). It is located at Kastrup, 8 km south-east of central Copenhagen. It is connected by train to Copenhagen Central Station and beyond as well as to Malmö and other towns in Sweden.

Further information: List of the largest airports in the Nordic countries 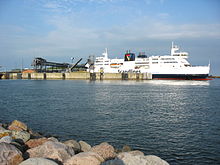 Denmark's ports handle some 48 million passengers and 109 million tonnes of cargo per year.[8]

Among the most important ports for passenger traffic (thousands of passengers per year in 2007) are:

Among the most important ports for cargo traffic (millions of tonnes per year in 2007) are:

There are no manmade waterways in Denmark. There is however a 160 km route through the Limfjorden in northern Jutland linking the North Sea to the Kattegat.[9]