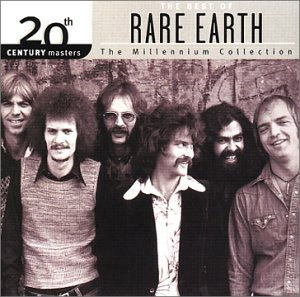 Rare Earth is an American affiliated with 's Rare Earth (which was named after the band), who were particularly famous in the late 1960s and the 1970s. Although not the first white band signed to Motown, Rare Earth was the first big hit-making act signed by Motown that consisted only of white members, although a percussionist later joined the group.

The group formed in 1961 as "The Sunliners", and changed their name to "Rare Earth" in 1967. After recording an unsuccessful debut album "Dream/Answers" on the Verve label in 1968, they were signed to Motown in 1969. The band was the first act signed to a new Motown imprint that would be dedicated to white rock acts. The record company didn't have a name for the new label yet, and the band jokingly suggested Motown call the label "Rare Earth." To the band's surprise, Motown decided to do just that.

Rare Earth had a number of Top Ten hits in the 1970-1971 period, including covers of ' "" (which was used in the documentary video It's Time) and "Get Ready". The cover of "Get Ready" was their biggest hit, peaking at #4 on the US pop charts, a better performance than the original. Other songs include "I Just Want to Celebrate", which peaked at #7 on the pop charts, and "Hey, Big Brother", which peaked at #19. They did not chart significantly after 1971, although they continued to record into the 1980s. Their 1973 album "Ma", written and produced by , is considered their best overall work, and features their version of "".

The group gained a bit of notoriety when it was mentioned dismissively in the lyrics to 's 1970 , "," which included the line, "The theme song [to the revolution] will not be written by Jim Webb, , nor sung by , Tom Jones, , Engelbert Humperdinck, or the Rare Earth."

Rare Earth, continues to perform at corporate events and on the oldies circuit. Bits from their recordings have been used as samples on recordings as diverse as 's "Derelict", and 's "GDMFSOB (feat. - U.N.K.L.E. uncensored version)", Black Sheep's "Try Counting Sheep", 's "Tale of Five Cities", Scarface's "Faith", NWA's "Real Niggaz Don't Die" and 's "What's Going On". Their hit "I Just Want to Celebrate" was also used in a major national advertising campaign by and in the final episode of TV show Six Feet Under. In 2008, it is being used in a commercial for . It is also sampled in the opening song "Sirens" on the 2007 album as well as "We Celebrate" on the new album . It is the end credits music in episode 24 (One Day in the Valley) of Entourage, and is prominently featured in one scene of the movie Three Kings. The song is also used in the trailer for the movie Tropic Thunder. On October 27th & 28th, 2007, heavy metal band performed "I Just Want to Celebrate" during their acoustic performances at 's show.