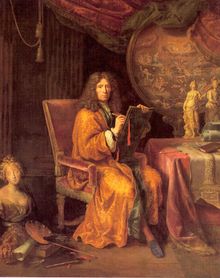 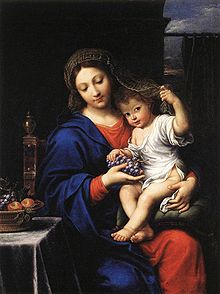 In 1630 he left the studio of Simon Vouet for Italy, where he spent twenty-two years, and made a reputation which brought him a summons to Paris. Having found favor with the king, Louis XIV, Mignard pitted himself against Charles Le Brun and declined to enter the Academy of which Le Brun was the head. Mignard also opposed the authority of the Academy.

Mignard spent most of his time painting portraits. Among his models were Turenne, Molière, Bossuet, Maintenon (in the Louvre), La Vallière, Sévigné, Montespan, Descartes (in Castle Howard).

With the death of Le Brun in 1690, the situation changed. Mignard succeeded to all the posts held by his opponent. He died in 1695 as he was about to begin work on the cupola of the Invalides. His best compositions have been engraved by Audran, Edelinck, Masson, Poilly and others.[citation needed]