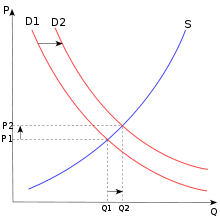 An example of a demand curve shifting

In economics, the demand curve is the graph depicting the relationship between the price of a certain commodity, and the amount of it that consumers are willing and able to purchase at that given price. It is a graphic representation of a demand schedule.[1] The demand curve for all consumers together follows from the demand curve of every individual consumer: the individual demands at each price are added together.

Demand curves are used to estimate behaviors in competitive markets, and are often combined with supply curves to estimate the equilibrium price (the price at which sellers together are willing to sell the same amount as buyers together are willing to buy, also known as market clearing price) and the equilibrium quantity (the amount of that good or service that will be produced and bought without surplus/excess supply or shortage/excess demand) of that market.[2] In a monopolistic market, the demand curve facing the monopolist is simply the market demand curve.

According to convention, the demand curve is drawn with price on the vertical axis and quantity on the horizontal axis. The function actually plotted is the inverse demand function.

The demand curve usually slopes downwards from left to right; that is, it has a negative association (for two theoretical exceptions, see Veblen good and Giffen good). The negative slope is often referred to as the "law of demand", which means people will buy more of a service, product, or resource as its price falls. The demand curve is related to the marginal utility curve, since the price one is willing to pay depends on the utility. However, the demand directly depends on the income of an individual while the utility does not. Thus it may change indirectly due to change in demand for other commodities.

A demand schedule is a table that lists the quantity of a good a person will buy at each different price[1] The demand curve is a graphical depiction of the relationship between the price of a good and the quantity of the good that a consumer would demand under certain time, place and circumstances. The demand relationship can also be expressed mathematically: Q = f(P; Y, Prg, Pop, X) where Q is quantity demanded, P is the price of the good, Prg is the price of a related good, Y is income, Pop is population and X is the expectation of some relevant future variable such as the future price of the product. The semi-colon means that the arguments to its right are held constant when the relationship is plotted two-dimensionally in (price, quantity) space. If one of these other variables changes the demand curve will shift. For example, if the population increased then there would be an outward (rightward) shift of the demand curve, since more consumers would mean higher demand. This shift is referred to as a change in demand and results from a change in the constant term. Movements along the demand curve occur only when quantity demanded changes in response to a change in price.

The demand curve is often graphed as a straight line of the form Q = a - bP where a and b are parameters. The constant “a” “embodies” the effects of all factors other than price that affect demand. If for example income were to change the effect of the change would be represented by a change in the value of a and be reflected graphically as a shift of the demand curve. The constant “b” is the slope of the demand curve and shows how the price of the good affects the quantity demanded.[3]

Shift of a demand curve

The shift of a demand curve takes place when there is a change in any non-price determinant of demand, resulting in a new demand curve.[4] Non-price determinants of demand are those things that will cause demand to change even if prices remain the same—in other words, the things whose changes might cause a consumer to buy more or less of a good even if the good's own price remained unchanged.[5] Some of the more important factors are the prices of related goods (both substitutes and complements), income, population, and expectations. However, demand is the willingness and ability of a consumer to purchase a good under the prevailing circumstances; so, any circumstance that affects the consumer's willingness or ability to buy the good or service in question can be a non-price determinant of demand. As an example, weather could be a factor in the demand for beer at a baseball game.

Some circumstances which can cause the demand curve to shift out include:

Some circumstances which can cause the demand curve to shift in include:

Movement along a demand curve

If a commodity is sold in whole units, and these are substantial for a consumer, then the individual demand curve can hardly be approximated by a continuous curve. It is a set function of the price, defined by a price above which no unit is bought, a price range for which one is bought, etc.

The elasticity of demand indicates how sensitive the demand for a good is to a price change. If the PED is between zero and 1 demand is said to be inelastic, if PED equals 1, the demand is unitary elastic and if the PED is greater than 1 demand is elastic. A low coefficient implies that changes in price have little influence on demand. A high elasticity indicates that consumers will respond to a price rise by buying a lot less of the good and that consumers will respond to a price cut by buying a lot more.