Infobox Film
name = The Cat and the Canary 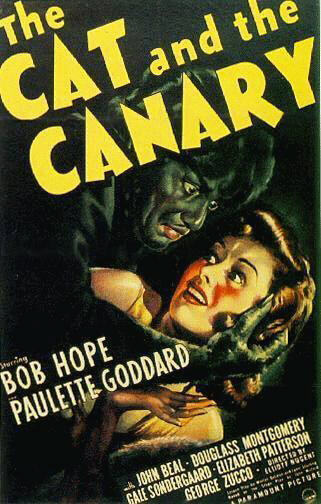 "The Cat and the Canary" is a 1939 comedy horror film remake of the 1927 film "The Cat and the Canary", which was based on the 1922 play by John Willard. The film is directed by and stars and . Despite being relatively well-known, this version has yet to receive an official VHS or DVD release in the United States.

Ten years have passed since the death of millionaire, Cyrus Norman. Cosby, Cyrus' attorney, has gathered Cyrus' 6 remaining relatives to his New Orleans' mansion for Cyrus' "reading of the will". To the others disappointment, Joyce is the sole heir, but, due to a streak of insanity running in the family, a second will has been made in case Joyce falls victim to it. This puts Joyce in danger. Suddenly, Miss Lu, Cyrus' maid, appears and warns them that the spirits have told her that one of them will die that night. Following this, Hendrick, a prison guard, warns them that, "The Cat", a homicidal maniac has escaped. This sets up Cyrus' relatives with a night filled with murders, mysteries and intrigue