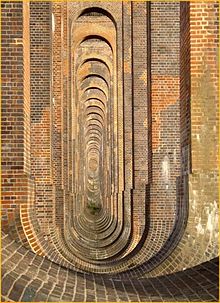 View through the supporting brick piers 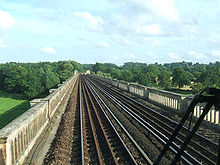 Travelling south along the viaduct

Built in 1841, the Ouse Valley Viaduct (also called Balcombe Viaduct) over the River Ouse on the London-Brighton Railway Line north of Haywards Heath and south of Balcombe is 1,475 feet (450 m) long.

The viaduct is 96 feet (29 m) high and is carried on 37 semi-circular arches, each of 30 feet (9.1 m), surmounted by balustrades. Each pier contains a Jack arch with a semi-circular soffit in order to reduce the number of bricks required.[1] At each end of the abutment there is an ornamental square open tower, the brickword of which is faced with stone from Heddon Quarries near Newcastle-upon-Tyne.[2] It was designed by engineer for the line John Urpeth Rastrick in association with the architect of the London to Brighton railway, David Mocatta. It has been described as probably the most elegant viaduct in Britain.[3]

The viaduct was opened in July 1841. The 11 million bricks needed for its construction travelled up the Ouse River (via Newhaven and Lewes) from Holland. It cost £38,500 to build.[4]

The structure is a Grade II listed building and was restored in 1996 with grants both from the Railway Heritage Trust and English Heritage. Matching stone was imported from France, to ensure a close match to the existing balutrades and pavilions.[5].

The viaduct is still used, with around 110 trains a day passing over it on the Brighton Main Line.

View of the viaduct, looking towards the South-East
Categories: