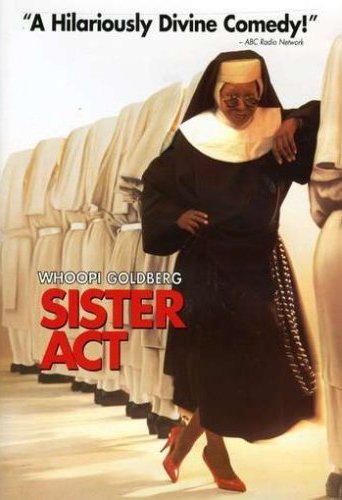 "Sister Act" is a 1992 American released by . Directed by , it features musical arrangements by and stars as a lounge singer who has been put under in a and has to pretend to be a when a mob boss puts her on his hit list. Also in the cast are , , , , and . The film is #83 on Bravo's "The 100 Funniest Movies" list.

The film was followed by a 1993 sequel, "". It also inspired a musical stage version that premiered at the in in 2006.

The movie opens at a Catholic elementary school in 1968. A young girl, revealed to be the film's main character, is warned against heading down the wrong path due to her behavior in class.

The girl is Deloris Van Cartier (played by ), a lounge singer dating a married mobster, Vince LaRocca () and she is oblivious to his criminal activities. But the relationship sours after an argument, and later Deloris witnessses him shoot his limo driver, who had been supposedly giving information to the police. Deloris manages to escape to the police and informs them that she is willing to testify against Vince; Lt. Eddie Souther () is put in charge of keeping her safe.

She reluctantly goes into hiding as a in a Catholic in , where she wears a habit and is given the name "Sister Mary Clarence". Reverend Mother (), who takes an instant dislike to Deloris, is only pacified by promises of funds for the neglected church, while Deloris herself chafes at the austere lifestyle of the convent and grates on the nerves of the Abbess, who puts her in the convent's choir (lackluster and off-key) to keep her out of trouble; but this is where she shines, taking over the choir and putting a new touch on old songs. She has the choir swinging and singing to gospel renditions of hymns ("Hail Holy Queen"), and adapted to have religious themes (for example, ' "" changed into "My God"). Despite Reverend Mother's protests, she brings new vigor into the convent and leads it in cleaning up the surrounding neighborhood. Her efforts draw a lot of attention, even from the Pope himself. Meanwhile, Deloris is finding peace and purpose.

The scheme is uncovered by Vince and Deloris is kidnapped by Vince's goons, to Eddie's dismay; but after explaining the situation to the other nuns they agree to help. Meanwhile, Vince orders Deloris killed; she remains calm, making Vince and company rattled, and subsequently escapes. The group of nuns survive the final conflict with Vince and he is arrested. The victorious nuns return to San Francisco for the Pope's concert. Deloris eventually returns to her successful singing career.

Young Deloris in film is played by Isis Carmen Jones, who had previously played a younger version of another of Goldberg's characters () in an episode of "".

The church in which Whoopi Goldberg takes refuge is St. Paul's Catholic Church, located at Valley and Church Streets in , an upper middle class neighborhood of San Francisco. The storefronts on the opposite side of the street were converted to give the area a look.

The order of nuns depicted in the film is the Sisters of St. Joseph of the Third Order of Saint Francis, based on their habit.

The film's soundtrack was released in conjunction with the film, and contained the musical numbers performed by actors in the film itself, pre-recorded songs that were used as part of the background music, and instrumental music composed by Marc Shaiman for the film. The track list is as follows:

Later in the year of the film's release, Whoopi Goldberg and the film "nuns" performed at a Democratic fundraiser for .

The Region 1 DVD was released on , . Extras are the film's theatrical trailer and a music video for "Shout" by "Deloris and the Sisters", which contained clips from the film.