Hummus
This article is about the food. For the band, see Humus (band). For the organic matter in soil, see Humus.

Hummus is a Levantine Arab food dip or spread made from cooked, mashed chickpeas, blended with tahini, olive oil, lemon juice, salt and garlic.[1][2] It is popular throughout the Middle East and in Middle Eastern cuisine around the globe.

The English word comes from Turkish humus meaning the hummus food dip or spread, which in turn comes from Arabic حمّص ḥummuṣ, in turn derived from ḥimmaṣ "chickpeas".[3] The earliest known attestation for hummus in English is in 1955.[4] Spellings of the word in English can be inconsistent.[5] Among the spellings are hummus, houmous, hommos, humos, hoummos, etc. The spelling humus is generally avoided in English as it is a homonym of humus (organic matter in soil), though this is the usual Turkish spelling[5] and the OED indicates the word entered the English language from Turkish.[4] The chickpea in Turkish has the unrelated name nohut. The Arabic name of the prepared spread is حمّص بطحينة ḥummuṣ bi ṭaḥīna which means "chickpeas with tahini". 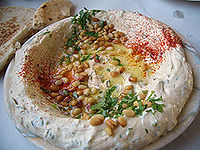 Many cuisine-related sources describe hummus as a very ancient food,[6][7][8] or connect it to famous historical figures such as Saladin.[9] Indeed, its basic ingredients—chickpeas, sesame, lemon, and garlic—have been eaten in the region for millennia.[10][11]

But in fact, there is no specific evidence for this purported ancient history of hummus bi tahini.[12] Though chickpeas were widely eaten in the region, and they were often cooked in stews and other hot dishes,[13] puréed chickpeas eaten cold with tahini do not appear before the Abbasid period in Egypt and the Levant.[14]

The earliest known recipes for something similar to hummus bi tahini date to 13th century Egypt. A cold purée of chickpeas with vinegar and pickled lemons with herbs, spices, and oil, but no tahini or garlic, appears in the Kitāb al-Wusla ilā l-habīb fī wasf al-tayyibāt wa-l-tīb;[14] and a purée of chickpeas and tahini called hummus kasa appears in the Kitab Wasf al-Atima al-Mutada: it is based on puréed chickpeas and tahini, and acidulated with vinegar (though not lemon), but it also contains many spices, herbs, and nuts, and no garlic. It is also served by rolling it out and letting it sit overnight,[15] which presumably gives it a very different texture from hummus bi tahini.

The earliest known documentation of hummus in the modern form comes from a late 19th-century text; and it appears it was unknown outside Damascus at that time.[2]

Hummus is high in iron and vitamin C and also has significant amounts of folate and vitamin B6.[16] The chickpeas make it a good source of protein and dietary fiber; the tahini consists mostly of sesame seeds, which are an excellent source of the amino acid methionine, complementing the proteins in the chickpeas. Depending on the recipe, hummus carries varying amounts of monounsaturated fat.[17] Hummus is useful in vegetarian and vegan diets; like other combinations of grains and pulses, it serves as a complete protein when eaten with bread. 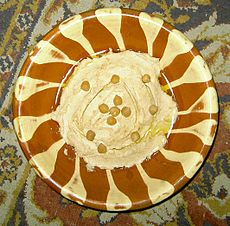 As an appetizer and dip, hummus is scooped with flatbread (such as pita). It is also served as part of a meze or as an accompaniment to falafel, grilled chicken, fish or eggplant. Garnishes include chopped tomato, cucumber, cilantro, parsley, caramelized onions, sautéed mushrooms, whole chickpeas, olive oil, hard-boiled eggs, paprika, sumac, ful, olives, pickles and pine nuts (as photographed in the "History" section). Outside the Middle East, it is sometimes served with tortilla chips or crackers.

Hummus ful (pronounced [ˈfuːl]) is topped with a paste made from fava beans boiled until soft and then crushed. Hummus masubha/mashawsha is a mixture of hummus paste, warm chickpeas and tahini.

In Vegetarian Dishes from the Middle East, Arto der Haroutunian calls hummus "one of the most popular and best-known of all Syrian dishes" and "a must on any mezzeh table."[18] Syrians in Canada's Arab diaspora prepare and consume hummus along with other dishes like falafel, kibbe and tabouleh, even among the third and fourth-generation offspring of the original immigrants.[19]

For Palestinians, hummus has long been a staple food, often served warm.[20] All of the ingredients in hummus are easily found in Palestinian gardens, farms and markets, thus adding to the availabilty and popularity of the dish. In Palestine, hummus is usually garnished, with olive oil, "nana" mint leaves, paprika, parsley or cumin.[21] A related dish popular in the region of Palestine and Jordan is laban ma' hummus ("yogurt and chickpeas"), which uses yogurt in the place of tahini and butter in the place of olive oil. Hummus is served with pita bread and is eaten for breakfast, lunch or dinner.

Hummus is a common part of everyday meals in Israel.[22] Israelis elevated Hummus to become a "national food symbol" and consume more than twice as much hummus as their Arab neighbors, according to figures by Tsabar Salads, a hummus manufacturer in Israel.[23] Commenting on its popularity, Gil Hovav, an Israeli food editor interviewed on the BBC program Cooking in the Danger Zone, stated that "even during the intifada years Jews would sneak [...] into the Muslim quarter just to have a vital, really genuine good humous [sic]," and noted that like many dishes considered to be Israeli national foods, hummus is actually Arab.[24] However, he also said, commenting on Iraqi, Egyptian, Syrian or Yemeni food in Israel, that "Jews came from these countries to Israel and they brought their food with them".[25] Many restaurants run by Mizrahi Jews and Arab citizens of Israel are dedicated to hot hummus, which may be served as chick peas softened with baking soda along with garlic, olive oil, cumin and tahini. One of the fancier hummus versions available is hummus masabacha, made with lemon-spiked tahini garnished with whole chick peas, a sprinkling of paprika and a drizzle of olive oil.[26] Hummus is sold in restaurants, supermarkets and hummus-only shops (known in Hebrew as humusiot).

By the end of the 20th century, hummus had emerged as part of the American culinary fabric.[27] In 2008, more than fifteen million Americans consumed hummus on a regular basis.[27] Hummus was popularized in the United States by Jews returning from visits in Israel and by Israeli expatriates.[27]

According to a 2010 market research, hummus consumption in the United States has increased by 35% over a period of 21 months, with sales reaching nearly $300 million. In 2006, hummus was present in 12% percent of American households, rising to 17% by early 2009.[28] One commentator attributed the growth of Hummus to America’s embrace of ethnic foods, and to experimentation with exotic foods.[28]

In November 2009, Gadi Lesin, President & CEO of the Israeli Strauss group food manufacturer said that market share of co-owned Sabra Dipping Company in the USA makes it the largest packaged hummus dip manufacturer in the world.[29] 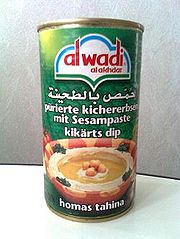 Lebanese produced hummus in a can, sold in Sweden.

In October 2008 the Association of Lebanese Industrialists petitioned to the Lebanese ministry of Economy to request protected status from the European Commission for hummus as a uniquely Lebanese food, similar to the Protected Geographical Status rights held over regional food items by various European Union countries.[30][31][32] Fadi Abboud (president of the Lebanese Industrialists Association), stated that "Israelis have usurped several Lebanese and oriental products",[1]. According to Abboud, Lebanon exported the first hummus dish in 1959.[33] As a response, food critic Janna Gur wrote: "The success of certain brands of Israeli hummus abroad may have been what brought about Abboud's anger", leading him to claim that Israel has been "stealing" their country's national dishes, like hummus, falafel, tabbouleh and baba ghanouj.[34] In response, Shooky Galili, an Israeli journalist specialising in food who writes a blog dedicated to hummus,[2] said that "trying to make a copyright claim over hummus is like claiming for the rights to bread or wine. [...] Hummus is a centuries old Arab dish—nobody owns it, it belongs to the region."[35] As of late 2009, the Lebanese Industrialists Association was still "preparing documents and proof" to support its claim.[36]