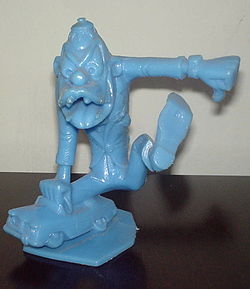 Generally about 6 inches tall, each figure stands on a flat base in a fixed, "demented" pose—complete with bulging, bloodshot eyes and maniacal expression. They originally sold in five and dime stores like Woolworth's, Newberry's and G. C. Murphy for 15 cents apiece. Each figure was available in a variety of colors; the current value and/or collectibility of these vintage toys is determined by the scarcity of the figure and color, as well as the overall condition. (The third series is the hardest to find—and usually the most expensive.) Their popularity led Marx to expand the product line with several similar series, including Weird-Ohs, Blame-Its and Cartoon Soldiers (commonly referred to as "Nutty Generals"). Marx manufactured other toys based on the Nutty Mad brand as well, including battery-operated tin toys made in Japan, wind-up toys, water pistols, a bagatelle-style pinball game, and even an enclosed, tabletop target-shooting game.

In the 1980s and '90s, recastings from the original Marx molds began to appear from PlastiMarx out of Mexico. These are usually (but not always) a cream color, do not carry the Marx copyright on the bottom, and are worth considerably less than the originals.

Weird-Ohs: (A similar Marx-produced series of plastic figures, based on the Hawk Model kits created by illustrator and cartoonist Bill Campbell.[1])