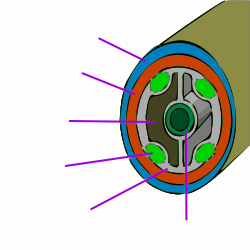 A coelomate animal is basically a set of concentric tubes, with a gap between the gut and the outer tubes.

/ˈsiːləm/ see-ləm) (also celom) is a fluid-filled cavity formed within the mesoderm. Coeloms developed in triploblasts but were subsequently lost in several lineages. Loss of coelom is correlated with reduction in body size. Coeloms are only ever present in triploblastic animals, though coelom is sometimes (incorrectly) used to refer to any developed digestive tract.

Functionally, a coelom can absorb shock or provide a hydrostatic skeleton. It also allows organs to grow independently off the body wall. This can be seen in the digestive tract of earthworms and other annelids, which is suspended within the body in a mesentery derived from a mesoderm-lined coelom. In mammals, the coelom forms the peritoneal, pleural, and pericardial cavities.

In the past, zoologists grouped animals based on characters related to the coelom. The presence or absence of a coelom and the way in which it was formed was believed to be important in understanding the phylogenetic relationships of animal phyla. However, recent molecular phylogenies have suggested this characteristic is not as informative as previously believed: the coelom may have arisen twice, once in protostomes and once among the deuterostomes.[1] The coelomate phyla comprise Entoprocta, Ectoprocta, Phoronida, Brachiopoda, Mollusca, Priapulida, Sipuncula, Echiura, Annelida, Tardigrada, Pentastoma, Onychophora, Arthropoda, Pogonophora, Echinodermata, Chaetognatha, Hemichordata and Chordata.[2]