Morocco is a 1930 film in which a Foreign Legionnaire meets and falls in love with a singer. It was directed by Josef von Sternberg and stars Gary Cooper, Marlene Dietrich and Adolphe Menjou. The story was adapted by Jules Furthman from the novel Amy Jolly by Benno Vigny. Today, the film is most famous for the scene in which Dietrich performs a song dressed in a man's tuxedo and kisses another woman, both of which was rather scandalous for the period.

It was nominated for four Academy Awards in the categories of Best Actress in a Leading Role (Marlene Dietrich), Best Art Direction, Best Cinematography and Best Director (Josef von Sternberg).[1] In 1992, Morocco was selected for preservation in the United States National Film Registry by the Library of Congress as being "culturally, historically, or aesthetically significant".

Wealthy La Bessiere (Adolphe Menjou) tries to strike up an acquaintance with disillusioned nightclub singer Amy Jolly (Marlene Dietrich) on a ship bound for Morocco. Though polite, she later tears up and tosses away his calling card. They meet again at the nightclub where she is the headliner.

Also in the audience is appreciative ladies man Legionnaire Private Tom Brown (Gary Cooper). During her first performance, after kissing Legionnaire Adjutant Caesar's wife (Eve Southern), Amy slips Tom her key. He takes her up on her offer that night, and they become acquainted. He discovers that she has become embittered with life and men, but, as they talk, she finds herself coming to like him. Unwilling to risk heartbreak once again, she asks him to leave before anything serious happens.

On the street, Tom encounters Madame Caesar. It is clear that she has a past clandestine relationship with him, which she desires intensely to maintain. Her husband, Tom's commanding officer, watches undetected from the shadows, as Tom rejects her. Meanwhile, Amy changes her mind and seeks Tom out. Madame Caesar then hires two street ruffians to attack the couple. Tom manages to seriously wound both, while he and Amy escape unscathed.

The next day, Tom is brought before Adjutant Caesar on the charge of injuring two allegedly harmless natives. Amy clears him, but Caesar makes him aware that he knows about Tom's involvement with his wife. Tom is ordered to leave for Amalfi Pass with a detachment commanded by Caesar; he suspects that Caesar intends to rid himself of his romantic rival.

That night, Tom overhears La Bessiere, who has been courting Amy all along, offer to marry her. Though he has fallen in love with her himself, Tom decides that she would be better off with a rich man than with a poor Legionnaire. When Tom hides the depth of his feelings for her before his departure, Amy eventually accepts La Bessiere's proposal.

On the march to Amalfi Pass, the detachment runs into a machine gun nest. Caesar orders Tom to deal with it, then decides to accompany him. Caesar is killed by the enemy.

Later, at their engagement party, La Bessiere and Amy learn that what's left of Tom's detachment has returned. Frantic, Amy rushes outside, but learns that Tom was wounded and left behind to recuperate in a hospital. She informs La Bessiere that she must go to Tom that very night; wanting only her happiness, he drives her there.

She finds that he has not been injured at all. Because he feigned being wounded to avoid returning, he has been assigned to a new unit, which is about to march away into the desert. Amy is torn, but when she sees a handful of native women stubbornly following the Legionnaires they love, she joins them. 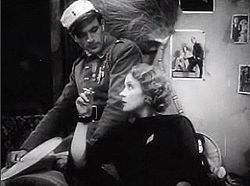 Dietrich knew little English at the time and spoke her lines phonetically.

According to Robert Osborne of Turner Classic Movies, Cooper and von Sternberg did not get along. Von Sternberg filmed so as to make Cooper look up at Dietrich, emphasizing her at his expense. Cooper complained to his studio bosses and got it stopped.

The final scene is recreated in the 1946's Mexican film Enamorada, directed by Emilio Fernández.