The topology of Â can be defined in several equivalent ways. We first define it in terms of the primitive spectrum .

Hull-kernel closure is easily shown to be an idempotent operation, that is

Since unitarily equivalent representations have the same kernel, the map π ↦ ker(π) factors through a surjective map

We use the map k to define the topology on Â as follows:

Definition. The open sets of Â are inverse images k−1(U) of open subsets U of Prim(A). This is indeed a topology.

The topology on Â induced from the hull-kernel topology has other characterizations in terms of states of A. 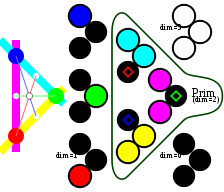 3-dimensional commutative C*-algebra and its ideals. Each of 8 ideals corresponds to a closed subset of discrete 3-points space (or to an open complement). Primitive ideals correspond to closed singletons. See details at the image description page.

The spectrum of a commutative C*-algebra A coincides with the usual dual of A. In particular, suppose X is a compact Hausdorff space. Then there is a natural homeomorphism

This mapping is defined by

I(x) is a closed maximal ideal in C(X) so is in fact primitive. For details of the proof, see the Dixmier reference. For a commutative C*-algebra,

The C*-algebra of bounded operators

The spectrum of L(H) on the other hand is much larger. There are many inequivalent irreducible representations with kernel K(H) or with kernel {0}.

Suppose A is a finite dimensional C*-algebra. It is known A is isomorphic to a finite direct sum of full matrix algebras:

where min(A) are the minimal central projections of A. The spectrum of A is canonically isomorphic to min(A) with the discrete topology. For finite dimensional C*-algebras, we also have the isomorphism

Other characterizations of the spectrum

The hull-kernel topology is easy to describe abstractly, but in practice for C*-algebras associated to locally compact topological groups, other characterizations of the topology on the spectrum in terms of positive definite functions are desirable.

In fact, the topology on Â is intimately connected with the concept of weak containment of representations as is shown by the following:

Theorem. Let S be subset of Â. Then the following are equivalent for an irreducile representation π

with ||ξ||=1, is the weak limit of states associated to representations in S.

The second condition means exactly that π is weakly contained in S.

From the previous theorem one can easily prove the following;

given by the GNS construction is continuous and open.

There is yet another characterization of the topology on Â which arises by considering the space of representations as a topological space with an appropriate pointwise convergence topology. More precisely, let n be a cardinal number and let Hn be the canonical Hilbert space of dimension n.

Irrn(A) is the space of irreducible *-representations of A on Hn with the point-weak topology. In terms of convergence of nets, this topology is defined by πi → π if and only if

It turns out that this topology on Irrn(A) is the same as the point-strong topology, i.e. πi → π if and only if

Theorem. Let Ân be the subset of Â consisting of equivalence classes of representations whose underlying Hilbert space has dimension n. The canonical map Irrn(A) → Ân is continuous and open. In particular, Ân can be regarded as the quotient space of Irrn(A) under unitary equivalence.

Remark. The piecing together of the various Ân can be quite complicated.

Â is a topological space and thus can also be regarded as a Borel space. A famous conjecture of G. Mackey proposed that a separable locally compact group is of type I if and only if the Borel space is standard, i.e. is isomorphic (in the category of Borel spaces) to the underlying Borel space of a complete separable metric space. Mackey called Borel spaces with this property smooth. This conjecture was proved by James Glimm for separable C*-algebras in the 1961 paper listed in the references below.

Examples of separable locally compact groups G such that C*(G) is of type I are connected (real) nilpotent Lie groups and connected real semi-simple Lie groups. Thus the Heisenberg groups are all of type I. Compact and abelian groups are also of type I.

Theorem. If A is separable, Â is smooth if and only if A is of type I.

The result implies a far-reaching generalization of the structure of representations of separable type I C*-algebras and correspondingly of separable locally compact groups of type I.

This is the Corollary of Theorem 2.9.5 of the Dixmier reference.

If G is a locally compact group G, the topology on dual space of the group C*-algebra C*(G) of G is called the Fell topology, named after J. M. G. Fell.