The Paul H. Nitze School of Advanced International Studies (SAIS), a division of Johns Hopkins University based in Washington, D.C., is one of the world's leading and most prestigious graduate schools devoted to the study of international affairs, economics, diplomacy, and policy research and education.[1]

The SAIS main campus is located on Massachusetts Avenue's Embassy Row, just off Dupont Circle and across from the Brookings Institution and the Carnegie Endowment for International Peace, and next to the Center for Global Development and the Peterson Institute.

The school is regarded as a major center of political debate as it served as a base for a number of prominent political scientists and economists. Among them are political economy scholar Francis Fukuyama, (as of July 1, 2010, based at Stanford University as the Olivier Nomellini Senior Fellow at the Freeman Spogli Institute for International Studies); political scientist and former National Security Advisor Zbigniew Brzezinski, Middle East scholar Fouad Ajami, historian and political economist David Calleo and military historian and former Counselor of the U.S. Department of State Eliot Cohen. Its students are selected from a large pool of applicants from all parts of the world.[2]

SAIS was founded in 1943 by Paul H. Nitze and Christian Herter and became part of The Johns Hopkins University in 1950. The school was established during World War II by a group of statesmen who sought new methods of preparing men and women to cope with the international responsibilities that would be thrust upon the United States in the postwar world.

The founders assembled a faculty of scholars and professionals (often borrowed from other universities) to teach international relations, international economics, and foreign languages to a small group of students. The curriculum was designed to be both scholarly and practical. The natural choice for the location of the school was Washington, D.C., a city where international resources are abundant and where American foreign policy is shaped and set in motion. When the school opened in 1944, 15 students were enrolled.[3]

In 1955, the school created the Bologna Center in Italy, the first full-time graduate school located in Europe under an American higher-education system. By 1963, SAIS outgrew its first quarters on Florida Avenue and moved to one of its present buildings on Massachusetts Avenue. In 1986, the Hopkins-Nanjing Center was created in Nanjing, China, completing the school's global presence. 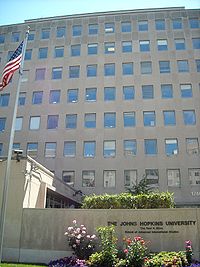 SAIS is a global school with campuses in three continents. It has nearly 600 full-time students in Washington, D.C., 190 full-time students in Bologna, Italy and about 160 full-time students in Nanjing, China.[4] Of these, 60% come from the United States and 37% from more than 70 other countries.[5] Around 50% are women and 22% are from U.S. minority groups. The SAIS Bologna Center is the only full-time international relations graduate program in Europe that operates under an American higher-education system, and the Hopkins-Nanjing Center, which teaches courses in both Chinese and English, is jointly administered by SAIS and Nanjing University.

A study conducted by the Institute for the Theory and Practice of International Relations[1] at the College of William & Mary examined graduate international relations programs throughout the United States, interviewing over 1,000 professionals in the field, with the results subsequently published in the November/December 2005 issue of Foreign Policy magazine. One of study's questions asked: "What do you consider the top five terminal masters programs in international relations for students looking to pursue a policy career?" From the study, 65% of respondents named Johns Hopkins University-SAIS as being the top-ranked program. SAIS received the most votes, followed by Georgetown University (Walsh), Harvard University (Kennedy), Tufts University (Fletcher), and Columbia University (SIPA). In 2007, Foreign Policy magazine produced the same study, and while SAIS remained one of the top-ranked programs, it moved to second position as Georgetown (Walsh) received the most votes.

Since 1990, SAIS and the Fletcher School have been the only non-law schools in the United States to participate in the prestigious Philip C. Jessup International Law Moot Court Competition. Competing against full-time law students, SAIS generalists have performed very well. SAIS has twice placed second overall out of 12 schools and advanced to the "final four" in its region. In head-to-head competitions, SAIS has defeated law schools such as Georgetown University, the University of Virginia, and the University of Maryland.

SAIS students have also demonstrated their versatility by successfully competing in the Sustainable Innovation Summit Challenge hosted by the Thunderbird School of Global Management in Glendale, Arizona. Two different SAIS teams won first place in both 2007 and 2008, besting teams of MBA students from some of the world's top business schools.[8][9]

A joint team from SAIS and the University of Pennsylvania’s Wharton School of Business received second place in the first "Global Challenge" competition, a first-of-its-kind competition that challenged teams of MBA and other graduate students to develop a public-private venture to support development and the tourism industry in Asia. The competition was organized in 2010 by the University of Maryland’s Robert H. Smith School of Business and the U.S. Agency for International Development (USAID).[10]

Since 2005, SAIS has dedicated a substantive theme for each academic year in order to encourage its students, faculty, academic programs, policy centers, and alumni to examine the role of the particular theme within international affairs. These specific themes provide opportunities for the school to review scholarship and exchange views through special lectures, conferences, and guest speakers. The annual themes also allow SAIS to enhance its fundraising with high-profile public events such as the lecture delivered by then Vice President of BP, Nick Butler, during "The Year of Energy at SAIS" in 2005.[11]

In addition to the different books and periodicals edited by SAIS programs or research centers, several school-wide publications are to be mentioned:

SAIS has over 15,000 alumni working in approximately 140 countries.[14] Over 130 SAIS graduates have become Ambassadors throughout the world.[15]

Past and present faculty