Fundraising or fund raising (also development) is the process of soliciting and gathering contributions as money or other resources, by requesting donations from individuals, businesses, charitable foundations, or governmental agencies (see also crowd funding). Although fundraising typically refers to efforts to gather money for non-profit organizations, it is sometimes used to refer to the identification and solicitation of investors or other sources of capital for for-profit enterprises. Traditionally, fundraising consisted mostly of asking for donations on the street or at people's doors, and this is experiencing very strong growth in the form of face-to-face fundraising, but new forms of fundraising such as online fundraising have emerged in recent years, though these are often based on older methods such as grassroots fundraising.

Fundraising is a significant way that non-profit organizations may obtain the money for their operations. These operations can involve a very broad array of concerns such as religious or philanthropic groups such as research organizations, public broadcasters, and political campaigns.

Many non-profit organizations take advantage of the services of professional fundraisers. These fundraisers may be paid for their services either through fees unrelated to the amounts of money to be raised, or by retaining a percentage of raised funds (percentage-based compensation). The latter approach is expressly forbidden under the Code of Ethics of the Association of Fundraising Professionals (AFP), a professional membership body.[1] However, by far the most common practice of American non-profits is to employ a staff person whose main responsibility is fund raising. This person is paid a salary like any other employee, and is usually a part of the top management staff of the organization.

The term "professional fundraiser" is in many cases a legislated term referring to third-party firms whose services are contracted for; whereas "fundraising professionals" or development officers are often individuals or staff at charitable non-profits. Although potentially confusing, the distinction is an important one to note.

Equally important are fundraising efforts by virtually every recognized religious group throughout the world. These efforts are organized on a local, national, and global level. Sometimes, such funds will go exclusively toward assisting the basic needs of others, while money may at other times be used only for evangelism. Usually, religious organizations mix the two, which can sometimes cause tension. 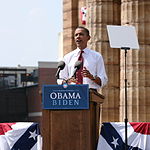 Fundraising also plays a major role in political campaigns. This fact, despite numerous campaign finance reform laws, continues to be a highly controversial topic in American politics. Political action committees (PACs) are the best-known organizations that back candidates and political parties, though others such as 527 groups also have an impact. Some advocacy organizations conduct fundraising for or against policy issues in an attempt to influence legislation.

While public broadcasters are completely government-funded in much of the world, there are many countries where some funds must come from donations from the public. In the United States less than 15% of local public broadcasting stations' funding comes from the federal government. Pledge drives commonly occur about three times each year, usually lasting one to two weeks each time. Viewership and listenership often declines significantly during funding periods, so special programming may be aired in order to keep regular viewers and listeners interested.

Organizations in the United States established for charitable purposes are allowed to raise funds from many sources. They are given a specific designation by the Internal Revenue Service (IRS), commonly noted as 501(c)(3) organizations. Other nonprofits such as fraternal associations have different IRS designations, and may or may not be eligible to raise funds. Financial information on many nonprofits, including all nonprofits that file annual IRS 990 forms is available from GuideStar.

Many non-profit organizations receive some annual funding from a financial endowment, which is a sum of money that is invested to generate an annual return. Although endowments may be created when a sizable gift is received from an individual or family, often as directed in a will upon the death of a family member, they more typically are the result of many gifts over time from a variety of sources.

A capital campaign is when fundraising is conducted to raise major sums for a building or endowment, and generally keep such funds separate from operating funds. These campaigns encourage donors to give more than they would normally give and tap donors, especially corporations and foundations who would not otherwise give. A capital campaign normally begins with a private phase before launching a public appeal.

Special events are another method of raising funds. These range from formal dinners to benefit concerts to walkathons. Events are used to increase visibility and support for an organization as well as raising funds.[3] Events can feature activities for the group such as speakers, a dance, an outing or entertainment, to encourage group participation and giving. Events can also include fundraising methods such as a raffle or charity auction. Events often feature notable sponsors or honoree. Events often feature a charity "ad book" as a program guide for the event, but more importantly, as another fundraiser providing members, supporters and vendors to show their support of and to the group at the event by way of placing an ad-like page, 1/2 page, 1/4 page, stating or showing support. Events and their associated fundraisers can be a major source of a groups revenue, visibility and donor relations.

While fundraising often involves the donation of money as an out-right gift, money may also be generated by selling a product of some kind, also known as product fundraising. Girl Scouts of the USA are well-known for selling cookies in order to generate funds. It is also common to see on-line impulse sales links to be accompanied by statements that a proportion of proceeds will be directed to a particular charitable foundation. Tax law may require differentiating between the cost of an item verses its gift value, such as a $100.00 per person dinner, for a $25.00 cost meal. Fundraising often involves recognition to the donor, such as naming rights or adding donors to an honor roll or other general recognition. Charity Ad Books are another form of donation for recognition, sponsorship or selling of ads often in an event related program or group directory.

When goods or professional services are donated to an organization rather than cash, this is called an in-kind gift.

A number of charities and non-profit organizations are increasingly using the internet as a means to raise funds; this practice is referred to as online fundraising. For example, the NSPCC operates a search engine which generates funds via Pay per click links, and Better The World operates tools allowing funds to be raised via members viewing ethical ads on a browser sidebar and/or blog widget.[4]

Some of the most substantial fundraising efforts in the United States are conducted by colleges and universities. Commonly the fundraising, or "development" / "advancement," program, makes a distinction between annual fund appeals and major campaigns. Most institutions use professional development officers to conduct fundraising appeals for both the entire institution or individual colleges and departments. Examples of this include athletics[5] and libraries.[6]

The donor base (often called a file) for higher education includes alumni, parents, friends, private foundations, and corporations. Gifts of appreciated property are important components of such efforts because the tax advantage they confer on the donor encourages larger gifts. The process of soliciting appreciated assets is called planned giving.

The classic development program at institutions of higher learning include prospect identification, prospect research and verification of the prospect's viability, cultivation, solicitation, and finally stewardship, the latter being the process of keeping donors informed about how past support has been used.

Often called donor cultivation, relationship building is the foundation on which most fundraising takes place.[7] Most development strategies divide donors into categories based on annual gifts. For instance, major donors are those that give at the highest level of the organization's fundraising scale and mid-level donors are in the middle.

More sophisticated strategies use tools to overlay demographic and other market segmentation data against their database of donors in order to more precisely customize communication and more effectively target resources.[8] Research by Peter Maple in the UK[9] shows that charities generally underinvest in good marketing research spending around a quarter of what an equivalent sized for profit company might spend.

Recent research by Adrian Sargeant and the Association of Fundraising Professionals' Fundraising Effectiveness Project suggests the sector has a long way to go in improving the quality of donor relations. The sector generally loses 50–60% of its newly acquired donors between their first and second donations and one in three, year on year thereafter. The economics of regular or sustained giving are rather different, but even then organizations routinely lose 30% of their donors from one year to the next.[12]

A capital campaign is "an intensive fundraising effort designed to raise a specified sum of money within a defined time period to meet the varied asset-building needs of an organization." Asset-building activities include the construction, renovation or expansion of facilities (for example, a new building), the acquisition or improvement of land, equipment, or other items, and additions to a financial endowment. Two characteristics set capital campaigns apart from other forms of fundraising activities. First, "the gifts solicited are much larger than those generally sought during an annual fund." Second, "pledges are emphasized as commitments payable over a number of years convenient to the donor or through the transfer of appreciated real or personal property."[13]

Various types of capital campaigns have been identified. The traditional "brick and mortar" campaign, focused on building construction or improvements, was considered a "once in a lifetime" campaign in the past because of the ambitious goals of the campaign. Today, however, organizations frequently schedule capital campaigns every five to ten years, and "the megagoals announced by large institutions often are the result of 'counting everything' during a five-to seven-year campaign period."[13]

A second type of capital campaign is the comprehensive, integrated, or total development campaign, which aims for a longer fund-raising program based on a long-term analysis of the organization's needs and direction. This form of capital campaign includes ordinary fundraising actives, such as annual gift drives, which are "slower-paced and lack the intensity of the traditional capital campaign."[13]