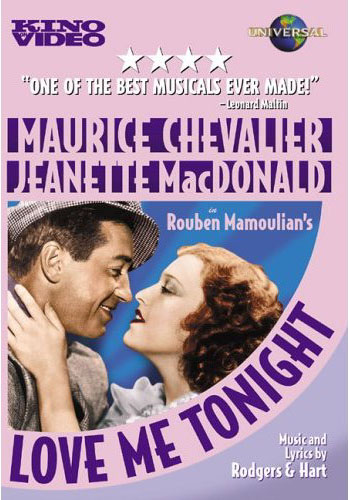 "This is an article about a film. For the song see "
"Love Me Tonight" is a 1932 film which tells the story of a penniless nobleman who moves a tailor to whom he owes money into his chateau and passes him off as nobility. It stars , , , Charles Butterworth and . It was directed by .

The movie was adapted by , and from the play by and .

It features the classic songs "", "Mimi", and "Lover" (the last of these is not sung romantically as it often is in nightclubs, but comically, as tries to control an unruly horse that she is riding). The staging of "Isn't It Romantic?" was revolutionary for its time, combining both singing and , as the song is passed from one singer (or group of singers) to another, all of whom are at different locales.

In 1990, "Love Me Tonight" was selected for preservation in the United States by the as being "culturally, historically, or aesthetically significant".

Parisian tailor Maurice Courtelin (Maurice Chevalier) poses as a baron in order to collect the unpaid bills a local aristocrat (Charlie Ruggles) have been piling up. On his way to the castle, he has a confrontation with haughty Princess Jeanette (Jeanette MacDonald). When he arrives at the castle, he charms the various denizens, including Jeanette's chattering aunts and her man-hungry cousin Valentine (). Jeanette is resistant towards the newcomer, but eventually falls for his charms, telling him she will love him no matter who he is or where he is. When he helps her redesign an outfit, he confesses to her that he's really a tailor. The entire household is outraged, and Maurice leaves. As he takes the train back to Paris, Jeanette realizes her mistake and follows him on horseback. He tells her to stay away, so she stands in front of the train. When the train stops, Maurice jumps out and they embrace as smoke from the train envelops them.

"Love Me Tonight" was released through on . Extra features included screenplay excerpts of deleted scenes, audio commentary by Miles Kreuger (Founder and President of the Institute of the American Musical, Inc. and also a good friend of ), production documents, censorship records, and performances from ("Louise") and ("Love Me Tonight") from the 1932 short "Hollywood on Parade". There are no existing uncensored versions of the original film.