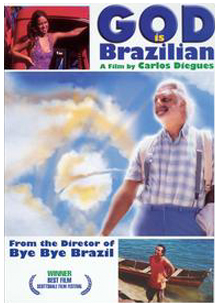 "Deus é Brasileiro" ("God is Brazilian") is a 2003 Brazilian directed and co-written by Carlos Diegues and based on a story by . In the film, , portrayed by , decides to take a vacation and heads to northeastern to find a saint as a replacement.

Taoca, a part-time fisherman and small-time con artist, finds a man holding on to a buoy in the middle of the ocean. The man claims he is , but Taoca doesn't believe him until he performs some miracles.

It seems God has decided to take a break and is searching for someone to temporarily take over. With Taoca, God travels the country in hopes of finding a new saint who is fit for the job. Along the way, they meet a woman, Madá, who joins the two in hopes they will take her to , where her mother has died.

Eventually, the trio comes across a young man who appears to have the right qualifications, except he has no belief in a higher power.