Figure 1: The classic example of a coiled coil is the GCN4 leucine zipper (PDB accession code 1zik), which is a parallel, left-handed homodimer. However, many other types of coiled coil exist.

A coiled coil is a structural motif in proteins, in which 2-7[1] alpha-helices are coiled together like the strands of a rope (dimers and trimers are the most common types). Many coiled coil type proteins are involved in important biological functions such as the regulation of gene expression e.g. transcription factors. Notable examples are the oncoproteins c-fos and jun, and the muscle protein tropomyosin.

The possibility of coiled coils for α-keratin was proposed by Francis Crick in 1952 as well as mathematical methods for determining their structure.[2] Remarkably, this was soon after the structure of the alpha helix was suggested in 1951 by Linus Pauling and coworkers.[3]

Coiled coils usually contain a repeated pattern, hxxhcxc, of hydrophobic (h) and charged (c) amino-acid residues, referred to as a heptad repeat.[4] The positions in the heptad repeat are usually labeled abcdefg, where a and d are the hydrophobic positions, often being occupied by isoleucine, leucine or valine. Folding a sequence with this repeating pattern into an alpha-helical secondary structure causes the hydrophobic residues to be presented as a 'stripe' that coils gently around the helix in left-handed fashion, forming an amphipathic structure. The most favorable way for two such helices to arrange themselves in the water-filled environment of the cytoplasm is to wrap the hydrophobic strands against each other sandwiched between the hydrophilic amino acids. It is thus the burial of hydrophobic surfaces, that provides the thermodynamic driving force for the oligomerization. The packing in a coiled-coil interface is exceptionally tight, with almost complete van der Waals contact between the side chains of the a and d residues. This tight packing was originally predicted by Francis Crick in 1952[2] and is referred to as Knobs into holes packing.

The α-helices may be parallel or anti-parallel, and usually adopt a left-handed super-coil (Figure 1). Although disfavored, a few right-handed coiled coils have also been observed in nature and in designed proteins.[5] 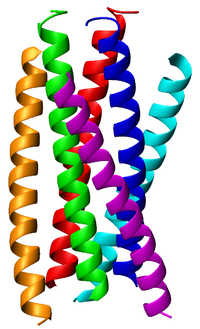 Side view of the gp41 hexamer that initiates the entry of HIV into its target cell.

Viral entry into CD4-positive cells commences when three subunits of a glycoprotein 120 (gp120) bind to CD4 receptor and a coreceptor. gp120 is closely associated to a trimer of gp41 via van der Waals interactions. Upon binding of gp120 to the CD4 receptor and coreceptor, a number of conformational changes in the structure leads to the dissociation of gp120 and to the exposure of gp41 and at the same time to the fusion peptide sequence located at the N-terminus of gp41 to anchor into the host cell. A spring-loaded mechanism is responsible for bringing the viral and cell membranes in close proximity that they will fuse. The origin of the spring-loaded mechanism lies within the exposed gp41, which has two heptad repeat repeats located at the N-terminal (HR1) as well as the C-terminal (HR2) side of the protein. HR1 forms a parallel, trimeric coiled coil on to which HR2 region coils forming the trimer-of-hairpins (or six-helix bundle) structure thereby facilitating membrane fusion through bringing the membranes close to each other. The virus then enters the cell and begins its replication. Recently, inhibitors derived from HR2 such as Fuzeon (DP178, T-20) bind to the HR1 region on gp41 have been developed. Conversely, peptides derived from HR1 have little viral inhibition efficacy due to the propensity for these peptides to aggregate in solution. Chimeras of these HR1 derived peptides with GCN4 leucine zippers have been developed and have shown to be more active than Fuzeon, but these have not entered the clinic yet.

Because of their specific interaction coiled coils can be used as a dimerization "tag".

The general problem of deciding on the folded structure of a protein when given the amino acid sequence (the so-called protein folding problem) has not been solved. However, the coiled coil is one of a relatively small number of folding motifs for which the relationships between the sequence and the final folded structure are comparatively well-understood.[6][7] Harbury et al.. performed a landmark study using an archetypal coiled coil, GCN4, in which rules were established that govern the way that peptide sequence affects the oligomeric state (that is, the number of alpha-helices in the final assembly).[8][9] The GCN4 coiled coil is a 31-amino-acid (which equates to just over four heptads) parallel, dimeric (i.e., consisting of two alpha-helices) coiled coil and has a repeated isoleucine (or I, in single-letter code) and leucine (L) at the a and d positions, respectively, and forms a dimeric coiled coil. When the amino acids in the a and d positions were changed from I at a and L at d to L at a and I at d, a trimeric (three alpha-helices) coiled coil was formed. Furthermore, mutating the a and d positions both to L resulted in the formation of a tetrameric (four alpha-helices) coiled coil. These represent an astonishingly simple set of rules for the determination of coiled coil oligomeric states and allows scientists to effectively "dial-in" the oligomerization behavior. Another aspect of coiled coil assembly that is relatively well understood, at least in the case of dimeric coiled coils, is that placing a polar residue (in particular asparagine, N) at opposing a positions forces parallel assembly of the coiled coil. This effect is due to a self-complementary hydrogen bonding between these residues, which would go unsatisfied if an N was paired with, for instance, an L on the opposing helix.[10]