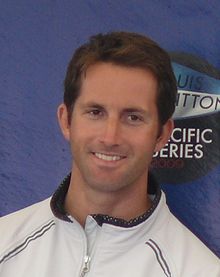 Charles Benedict Ainslie, CBE (born 5 February 1977 in Macclesfield) is an English sailor and three-times Olympic gold medalist. He started sailing at the age of 8 and first competed at the age of 10.[1] Ainslie's first international competition was the 1989 Optimist world championships held in Japan where he placed 37th.

At the beginning of 2005 he worked in the role of Tactician in the New Zealand based Team New Zealand who were preparing to compete in the challenger selection process to win the right to Challenge for the 32nd America's Cup.

In May 2005 Ainslie took the decision to relinquish the role of tactician and focus on improving his Match Racing skills as helmsman of the 'B' boat used to practice and tune the race boat helmed by Dean Barker.

He is presently skipper on Team Origin.

In December 2010, Ainslie finished in first place in the World Match Racing Tour, and is the 2010 ISAF Match Racing Champion.