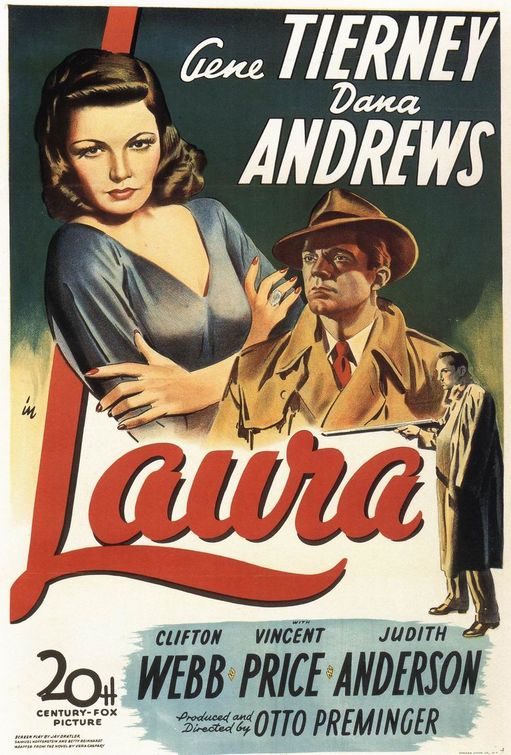 The movie was based on 's "Laura", a popular 1943 detective novel, and it was adapted for the screen by , , Elizabeth Reinhardt and (uncredited). The film's first director, , was fired early in the film's shooting due to creative differences with studio head .

Through the testimony of her friends and the reading of her letters, McPherson comes to know Laura and slowly falls in love with her. He becomes obsessed -- using the excuse of trying to solve the murder, he hangs around her apartment and is at one point accused by Lydecker of falling in love with a dead woman.

One night, he falls asleep under her portrait. He is awakened by the sound of someone entering the apartment. It is Laura. After recovering from the shock, McPherson determines that the murder victim was actually Diane Redfern, a model Laura had allowed to stay in her apartment.

McPherson is pleased to discover that Laura is as lovable as he had imagined. Now it becomes even more urgent to unmask the murderer. He suspects that Lydecker is also in love with her and that he fatally mistook Redfern for her in his determination to keep her to himself. McPherson warns Laura not to let anybody in after he leaves, but Lydecker gets in anyway. Lydecker is about to kill Laura when McPherson returns just in time.

* as Laura Hunt
* as Detective Lieutenant Mark McPherson
* as Waldo Lydecker. The character appears to be based on columnist, broadcaster and "New Yorker" theater critic , a famous wit who, like Waldo, was fascinated by murder (and who died in early 1943). Woollcott always dined at the , where Laura first approaches Lydecker, and had a habit of typing in his bathtub, as does Lydecker.
* as Shelby Carpenter
* as Ann Treadwell

Otto Preminger's original idea for the film score was to use 's "Sophisticated Lady." David Raksin later composed the familiar score for "Laura" over the course of a weekend, after being inspired by a he received from his wife. The theme from "Laura" was adapted by (who wrote the lyrics), , and , all of whom had hits. It has been recorded by various artists over four hundred times.

The famous portrait of Laura was in fact a photograph that the studio lightly brushed with paint. It was reused in the color film "".

In 1999, "Laura" was selected for preservation in the United States by the as being "culturally, historically, or aesthetically significant". In June 2008, the revealed its "Ten top Ten"—the best ten films in ten "classic" American film genres—after polling over 1,500 people from the creative community. "Laura" was acknowledged as the fourth best film in the mystery genre. [cite news | publisher = | title = AFI's 10 Top 10 | date = | url = http://www.afi.com/10top10/mystery.html | accessdate=2008-06-18]