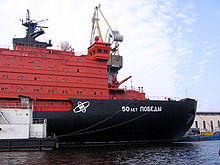 When the nuclear-powered Arktika class NS 50 Let Pobedy was put into service in 2007, it became the world's largest icebreaker.

Operation of a civil or naval ship power plant is similar to land-based nuclear power reactors. A sustained nuclear reaction in the reactor produces heat that is used to boil water. The resulting steam spins a turbine. The turbine shaft may be coupled through a gearbox speed reducer to the ship's propeller, or in a turbo-electric drive system may operate a generator that supplies electric power to motors connected to the propellers.

The Russian, U.S. and British navies rely on steam turbine propulsion, while the French and Chinese ships use the turbine to generate electricity for propulsion (turbo-electric propulsion). Most nuclear submarines have a single reactor, but Russian submarines and the USS Triton had two. Most American aircraft carriers are powered by two reactors, but the USS Enterprise had eight. The majority of marine reactors are of the pressurized water type, although the US and Soviet navies have designed warships powered with liquid metal cooled reactors.

Nuclear power for propulsion has several appealing operating and logistic characteristics to the designers of ships for both civil and military purposes.

A small amount of nuclear fuel can provide energy equivalent to millions of times its weight in coal or oil. It was quite practical to build a reactor with enough fuel to operate a vessel for years, and refuelling was limited to major refits every few years. Although the cost to manufacture fuel elements was high compared to the purchase price of uranium, overall the cost due to fuel was much lower than the comparable fossil fuel. Like sailing ships, nuclear vessels are independent of the vagaries of procurement of fuel at every port (for at least a few years at a time, anyway). The laborious and costly process of loading and firing fuel was largely eliminated for most of the vessel's operating life.

A secondary consequence of the high energy density of nuclear fuel was that it was practical to provide very high power in a vessel without penalty in payload (weapons or cargo) capacity. This allows cargo vessels to operate at high speed for rapid delivery of products. Aircraft carriers could travel at high speeds for long periods to facilitate aircraft operation, without losing storage space for aviation fuel and aircraft. Arctic vessels could operate for months, independent of fuel supplies.

Nuclear reactors require no combustion air and emit no exhaust gas. This is a minor benefit for surface vessels, since it eliminates the space-consuming exhaust stacks, intake ducts, and blowers required to move combustion air into the boilers. For submersible vessels this is the single most important characteristic. With nuclear power, a submarine could be propelled at speeds comparable to surface ships for protracted periods limited only by crew endurance, not by fuel supply or battery capacity. Although not a motivation for the original development, current interest is partly sparked by a desire to eliminate the environmental effect of CO2, SO2 and other air pollutants emitted by cargo ships. For economic reasons, ships operate on the lowest-quality fuel their engines can tolerate, but this means they have high air pollution emissions.

Marine reactors are physically small and produce relatively high power for each unit of space. Land-based electrical power plant reactors are rated thousands of megawatts of thermal power, but a propulsion reactor is no bigger than a few hundred megawatts. A propulsion reactor is limited in physical size by the vessel dimensions. Reactor mechanical systems must operate under vibration and rolling of a ship under way in rough seas; particularly, reactor shutdown systems may not rely on the reactor remaining perpendicular to the Earth's surface. Weather and salt-water corrosion provide extra stress to ship-borne power plants.

A nuclear fuel element for the cargo ship NS Savannah. The element contains four bundles of 41 fuel rods. The uranium oxide is enriched to 4.2 and 4.6 percent of U-235

The fuel used is typically of higher enrichment than land-based electric power plants. Some marine reactors run on low-enriched uranium (requiring frequent refueling). Others run on highly enriched uranium, varying from from 20% 235U, to over 96% in U.S. submarines [2] and are quieter in operation from smaller core.[3] This fuel choice increases the reactor's power density and extends the usable life of the nuclear fuel load, but is more expensive and a greater risk to nuclear proliferation than some of the other nuclear fuels.[4]

The fuel is not a ceramic UO2 (uranium oxide) but a metal-zirconium alloy (circa 15% U with 93% enrichment, or more U with lower enrichment). Marine reactors are designed for long core life, enabled by the relatively high enrichment of the uranium and by incorporating a "burnable poison" in the cores which is progressively depleted as fission products and minor actinides accumulate; the two effects cancel each other out. One of the technical difficulties is the creation of a fuel which will tolerate the very large amount of radiation damage. During use, the properties of nuclear fuel change. Fuel elements may crack and fission gas bubbles may form.

The marine reactor propulsion plant must be of cost effective design, construction and operation. It must be highly reliable and self sufficient, so as to be easily reparable and sustainable through repairs, conducted many thousands of miles from its home port. Long-term integrity of the compact reactor pressure vessel is maintained by providing an internal neutron shield.

Decommissioning nuclear-powered submarines has become a major task for US and Russian navies. After defuelling, U.S. practice is to cut the reactor section from the vessel for disposal in shallow land burial as low-level waste (see the Ship-Submarine recycling program). In Russia, whole vessels, or sealed reactor sections, typically remain stored afloat, although a new facility near Sayda Bay is to provide storage in a concrete-floored facility on land for some submarines in the far north.

Russia is well advanced with plans to build a floating nuclear power plant for their far eastern territories. The design has two 35 MWe units based on the KLT-40 reactor used in icebreakers (with refueling every four years). Some Russian naval vessels have been used to supply electricity for domestic and industrial use in remote far eastern and Siberian towns.

Insurance of nuclear vessels is not like the insurance of conventional ships. The consequences of an accident could span national boundaries, and the magnitude of possible damage is beyond the capacity of private insurers.[6] A special international agreement, the Brussels Convention on the Liability of Operators of Nuclear Ships, developed in 1962, would have made signatory national governments liable for accidents caused by nuclear vessels under their flag [7] but was never ratified owing to disagreement on the inclusion of warships under the convention.[8] Nuclear reactors under United States jurisdiction are insured by the provisions of the Price Anderson Act. 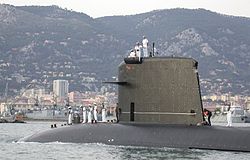 Under the direction of Admiral Hyman G. Rickover,[9] the design, development and production of nuclear marine propulsion plants started in the USA in the 1940s, with the first test reactor being started up in 1953. The first nuclear-powered submarine, USS Nautilus, put to sea in 1955. Much of the early development work on naval reactors was done at the Naval Reactor Facility on the campus of the Idaho National Laboratory.[10]

The Soviet Union also developed nuclear submarines. The first types developed were the November class, the first of which, K-3 "Leninskiy Komsomol", was underway under nuclear power on July 4, 1958.

Nuclear reactors gave the submarine sufficient power to operate at high speeds, independent of air, for extended intervals; it was practical to build submarines with submerged speed comparable to surface vessels.

Nautilus led to the parallel development of further Skate-class submarines, powered by single reactors, and a cruiser, USS Long Beach, in 1961, powered by two reactors. The aircraft carrier USS Enterprise, commissioned in 1961, is powered by eight reactor units.

By 1962 the United States Navy had 26 nuclear submarines operational and 30 under construction. Nuclear power had revolutionized the Navy. The technology was shared with the United Kingdom, while French, Soviet, Indian and Chinese developments proceeded separately.

After the Skate-class vessels, reactor development proceeded and in the USA a single series of standardized designs was built by both Westinghouse and General Electric, one reactor powering each vessel. Rolls-Royce built similar units for Royal Navy submarines and then developed the design further to the PWR-2 (pressurized water reactor).

The largest nuclear submarines ever built are the 26,500 tonne Russian Typhoon class. The smallest naval nuclear submarines to date are the 2,700 tonne French Rubis class submarine attack submarines. The U.S. navy operated an unarmed nuclear 400 ton NR-1 Deep Submergence Craft between 1969 and 2008, but it had no direct combat role.

USA and France have built nuclear aircraft carriers. By 1990 there were more nuclear reactors on (mostly naval) ships than (larger) reactors used for commercial electrical power.[11] Many of these submarines and other vessels were decommissioned in the 1990s.

Nuclear power civil merchant ships have not developed beyond a few experimental ships. The US-built NS Savannah completed in 1962 was primarily a demonstration of civil nuclear power and was too small and expensive to operate economically as a merchant ship. The ship design had been compromised and was neither an efficient freighter nor a viable passenger liner. The German-built Otto Hahn cargo ship and research facility sailed some 650,000 nautical miles (1,200,000 km) on 126 voyages in 10 years without any technical problems.[citation needed] However, it proved too expensive to operate and was converted to diesel. The Japanese Mutsu was dogged by technical and political problems. Its reactor had significant radiation leakage and fisherman protested the vessel's operations. All of these three ships used low-enriched uranium.

Recently there has been renewed interest in nuclear propulsion, and some proposals have been drafted. For example, the cargo coaster[12] is a new design for a nuclear cargo ship.

Nuclear propulsion has proven both technically and economically feasible for nuclear powered icebreakers in the Soviet Arctic. Nuclear-fuelled ships could operate for years without refueling, and the vessels could have powerful engines well-suited to the icebreaking tasks.

The Soviet icebreaker Lenin was the world's first nuclear-powered surface vessel in 1959 and remained in service for 30 years (new reactors were fitted in 1970). It led to a series of larger icebreakers, the 23,500 ton Arktika class of six vessels, launched from 1975. These vessels have two reactors and are used in deep Arctic waters. NS Arktika was the first surface vessel to reach the North Pole.

For use in shallow waters such as estuaries and rivers, shallow-draft Taymyr class icebreakers with one reactor are being built in Finland and then fitted with their nuclear steam supply system in Russia. They are built to conform with international safety standards for nuclear vessels.[13]

The following are ships that are or were in commercial or civilian use and have nuclear marine propulsion.

Both sank for reasons unrelated to their reactor plants and still lie on the Atlantic sea floor.

While not all of these were reactor accidents, they have a major impact on nuclear marine propulsion and the global politics because they happened to nuclear vessels. Many of these accidents resulted in the sinking of the boat containing nuclear weapons on board, which remain there to this day.[14]