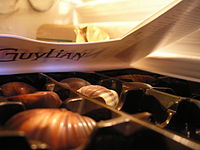 Guylian (French pronunciation: [ɡiljaːn]) is a Belgian chocolate manufacturer founded by Guy Foubert in 1960. The company takes its name from the combination of Foubert's first name (Guy) with that of his wife, Liliane. Guylian is perhaps most famous for their production of chocolate Sea Shells praline with different fillings. Guylian has been the major sustaining sponsor of Project Seahorse since 1999.

In 2008 Lotte Confectionery from South Korea bought the company for $164 mln.[1]

Born in 1938, the son of a Sint-Niklaas baker, Guy Foubert developed his skills at the Antwerp School of Confectionery and Patisserie in Belgium. During his schooling, Guy Foubert was already selling hand-made chocolate truffles on the local market.

The Chocolaterie Guylian was founded in 1960 and the name 'Guylian' is created by combining the first names of the bride and groom (Guy and Liliane). They started with a small production unit at home, producing pralines and chocolate truffles that were sold to local chocolate shops

A seahorse is used as the company's icon and is worldwide protected by copyright. Its tail curls the other way around than real seahorses.

Guylian sells pralines in gift boxes, individually wrapped chocolates, chocolate bars, chocolate truffles and napolitains. Guylian is best known for its chocolate Sea Shells. Beside the original Guylian hazelnut praline, created by Guy Foubert in the 1960's, there are now other flavours available.

In March 2005, Guylian established a Guinness World Record by building the world's largest chocolate sculpture of an Easter egg on the market square in Sint-Niklaas (Belgium). 26 Guylian master chocolatiers worked continuously for eight days to create this giant chocolate egg. The sculpture measured 8.32 meters high and 6.39 meters wide and was constructed using 1,950 kilos of chocolate or about 50,000 chocolate Sea Shell Bars.