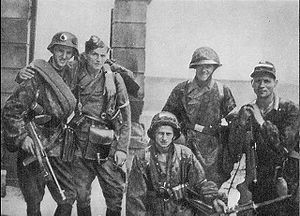 Soldiers from Kolegium "A" of w:Kedyw on Stawki Street in Wola district - Warsaw Uprising 1944

Most members of Kedyw were Boy Scouts from Związek Harcerstwa Polskiego and its wartime organization, Szare Szeregi. Many of the officers were cichociemni, special agents trained in the United Kingdom and parachuted into occupied Poland. Selected Kedyw groups (patrole) carried out operations all over occupied Poland. Notable types of operations included:

Prior to the Warsaw Uprising, most of the Kedyw units in the Warsaw area were moved into the city and grouped into infantry battalions. Notable among them were "Zośka", "Parasol" and "Miotła". After fighting broke out, most of the Kedyw forces joined the Radosław group. Kedyw units were among the most successful in the Uprising. The boy scouts not only had more experience than many regular soldiers, they had also managed to collect more supplies and arms.

Kedyw units first took part in seizing control of Warsaw's Wola district. After 10 days' heavy fighting in the Powązki Cemetery, in which all German attacks were repulsed with heavy casualties, the units withdrew overnight to the city center and Starówka (the old town), where they regrouped and defended their sectors until the capitulation of the Uprising in October 1944.