West Building of Nikon in NiShiOoi,Tokyo

listen (help·info) (TYO: 7731), also known as just Nikon, is a multinational corporation headquartered in Tokyo, Japan, specializing in optics and imaging. Its products include cameras, binoculars, microscopes, measurement instruments, and the steppers used in the photolithography steps of semiconductor fabrication, of which it is the world's second largest manufacturer.[2] The companies held by Nikon form the Nikon Group.[3] Among its products are Nikkor imaging lenses (for F-mount cameras, large format photography, photographic enlargers, and other applications), the Nikon F-series of 135 film SLR cameras, the Nikon D-series of digital SLR cameras, the Coolpix series of compact digital cameras, and the Nikonos series of underwater film cameras. Nikon's main competitors in camera and lens manufacturing include Canon, Casio, Kodak, Sony, Pentax, Panasonic, Fujifilm and Olympus.

Founded in 25 July 1917 as Nippon Kōgaku Kōgyō Kabushikigaisha (日本光学工業株式会社 "Japan Optical Industries Co., Ltd."), the company was renamed Nikon Corporation, after its cameras, in 1988. Nikon is one of the companies of the Mitsubishi Group.[4]

Nikon Corporation was established on 25 July 1917 when three leading optical manufacturers merged to form a comprehensive, fully integrated optical company known as Nippon Kōgaku Tōkyō K.K. Over the next sixty years, this growing company became a manufacturer of optical lenses (including those for the first Canon cameras) and equipment used in cameras, binoculars, microscopes and inspection equipment. During World War II the company grew to nineteen factories and 23,000 employees, supplying items such as binoculars, lenses, bomb sights, and periscopes to the Japanese military.

After the war Nippon Kōgaku reverted to producing its civilian product range in a single factory. In 1948, the first Nikon-branded camera was released, the Nikon I.[5] Nikon lenses were popularised by the American photojournalist David Douglas Duncan's use at the time of the Korean War. Duncan, who was working in Tokyo when the Korean War began, met a young Japanese photographer, Jun Miki, who introduced Duncan to Nikon lenses. From July 1950 to January 1951, Duncan covered the Korean War.[6] Fitting Nikon optics to his Leica rangefinder cameras produced high contrast negatives with very sharp resolution at the centre field.[7]

Nikko parent company brand, from which the Nikkor brand evolved.

Founded in 1917 as Nippon Kōgaku Kōgyō Kabushikigaisha (日本光学工業株式会社 "Japan Optical Industries Corporation"), the company was renamed Nikon Corporation, after its cameras, in 1988. The name Nikon, which dates from 1946, is a merging of Nippon Kōgaku (日本光学: "Japan Optical") and an imitation of Zeiss's brand Ikon. This would cause some early problems in Germany though as Zeiss complained that Nikon violated its trademarked camera, the "Ikon" and so from 1963 to 1968 Nikon F's in particular were labeled as 'Nikkor'.[8]

The Nikkor brand was introduced in 1932, a Westernized rendering of an earlier version Nikkō (日光), an abbreviation of the company's original full name[9] (Nikkō coincidentally means "sunlight" and is the name of a Japanese town.).

Another early brand, used on microscopes, was Joico,[10] an abbreviation of "Japan Optical Industries Co"[citation needed].

The rise of the Nikon F series

The Nikon SP and other 1950s and 1960s rangefinder cameras competed directly with models from Leica and Zeiss. However, the company quickly ceased developing its rangefinder line to focus its efforts on the Nikon F single-lens reflex line of cameras, which was successful[citation needed] upon its introduction in 1959. For nearly 30 years, Nikon's F-series SLRs were the most widely used small-format cameras among professional photographers[citation needed], as well as by the U.S. space program.

Despite introducing one of the first autofocus models, the slow and bulky F3AF, the company's determination to maintain lens compatibility with its F-mount prevented rapid advances in autofocus technology. Canon introduced a new type of lens-camera interface with its entirely electronic Canon EOS cameras and Canon EF lens mount in 1987. The much faster lens performance permitted by Canon's electronic focusing and aperture control prompted many professional photographers (especially in sports and news) to switch to the Canon system through the 1990s.[11]

Besides cameras, Nikon Corporation (Nikon) develops and manufactures photolithography equipment. In 1980 the first Nikon stepper, the NSR-1010G, was produced in Japan. Since then Nikon (through the Nikon Instruments Division) has introduced over fifty models of steppers and scanners for the production of semiconductors and liquid crystal displays. Nikon currently designs and manufactures precision equipment for use in semiconductor and liquid crystal display (LCD) fabrication, inspection, and measurement. Nikon also designs and manufactures visual imaging products including cameras; instruments such as microscopes; and other products such as chemical mechanical polishing (CMP) systems, binoculars, surveying instruments, eyewear, sport optics, and optical measuring and inspection equipment.

Inside the Nikon Salon

In Japan, Nikon runs the Nikon Salon exhibition spaces, runs the Nikkor Club for amateur photographers (to whom it distributes the series of Nikon Salon books), and arranges the Ina Nobuo Award, Miki Jun Award and Miki Jun Inspiration Awards.

Nikon created some of the first digital SLRs (DSLRs) as research projects for NASA in 1991.[12] After a 1990s partnership with Kodak to produce digital SLR cameras based on existing Nikon film bodies, Nikon released the Nikon D1 SLR under its own name in 1999. Although it used an APS-C-size light sensor only 2/3 the size of a 35 mm film frame (later called a "DX sensor"), the D1 was among the first digital cameras to have sufficient image quality and a low enough price for some professionals (particularly photojournalists and sports photographers) to use it as a replacement for a film SLR. The company also has a Coolpix line which grew as consumer digital photography became increasingly prevalent through the early 2000s.

Through the mid-2000s, Nikon's line of professional and enthusiast DSLRs and lenses including their back compatible AF-S lens line remained in second place behind Canon in SLR camera sales, and Canon had several years' lead in producing professional DSLRs with light sensors as large as traditional 35 mm film frames.[13] All Nikon DSLRs from 1999 to 2007, by contrast, used the smaller DX size sensor.

Then, 2005 management changes at Nikon led to new camera designs such as the full-frame Nikon D3 in late 2007, the Nikon D700 a few months later, and mid-range SLRs. Nikon regained much of its reputation among professional and amateur enthusiast photographers as a leading innovator in the field, especially because of the speed, ergonomics, and low-light performance of its latest models.[14][unreliable source?] The mid-range Nikon D90, introduced in 2008, was also the first SLR camera to record video.[15][16] Since then video mode has been introduced to many more of the Nikon DSLR cameras including the Nikon D3S, Nikon D7000 and Nikon D3100.[17][18][19]

Once Nikon introduced affordable consumer-level DSLRs such as the Nikon D70 in the mid-2000s, sales of its consumer and professional film cameras fell rapidly, following the general trend in the industry. In January 2006, Nikon announced it would stop making most of its film camera models and all of its large format lenses, and focus on digital models.[20] Nevertheless, Nikon is the only[citation needed] major camera manufacturer still making film SLRs. The remaining model is the professional Nikon F6 with the last amateur model, FM10, having been discontinued.

Although few models were introduced, Nikon made superb movie cameras as well. The R10 and R8 SUPER ZOOM Super 8 models (introduced in 1973) were the top of the line and last attempt for the amateur movie field. The cameras had a special gate and claw system to improve image steadiness and overcome a major drawback of Super 8 cartridge design. The R10 model has a high speed 10X macro zoom lens. Interestingly and contrary to other brands, Nikon never attempted to offer projectors and accessories.

Nikon has shifted much of its manufacturing facilities to Thailand, with some production (especially of Coolpix cameras and some low-end lenses) in China and Indonesia. The company constructed a factory in Ayuthaya north of Bangkok in Thailand in 1991. By the year 2000, it had 2,000 employees. Steady growth over the next few years and an increase of floor space from the original 19,400 square meters (208,827 square feet) to 46,200 square meters (497,300 square feet) enabled the factory to produce a wider range of Nikon products. By 2004, it had more than 8,000 workers.

As of 2009, all of Nikon's Nikon DX format DSLR cameras are produced in Thailand, while their Nikon FX format (full frame) cameras (D700, D3, D3S and D3X) are built in Japan. The Thai facility also produces most of Nikon's digital "DX" zoom lenses, as well as numerous other lenses in the Nikkor line.

In January 2006 Nikon announced the discontinuation of all but two models of its film cameras, focusing its efforts on the digital camera market.[21] It continued to sell the low-end FM10 (manufactured by Cosina) until 2009, and still offers the high-end F6 (manufactured by Nikon itself). Nikon has also committed to service all the film cameras for a period of ten years after production ceases.[22] 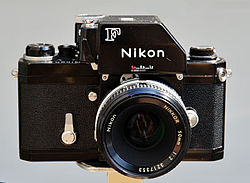 Between 1983 and the early 2000s[35] a broad range of compact cameras were made by Nikon. Nikon first started by naming the cameras with a series name (like the L35/L135-series, the RF/RD-series, the W35-series, the EF or the AW-series. In later production cycles, the cameras were double branded with a series-name on the one and a sales name on the other hand. Sales names were for example Zoom-Touch for cameras with a wide zoom range, Lite-Touch for ultra compact models, Fun-Touch for easy to use cameras and Sport-Touch for splash water resistance. After the late 1990s, Nikon dropped the series names and continued only with the sales name. Nikon's APS-cameras were all named Nuvis.

The cameras came in all price ranges from entry-level fixed-lens-cameras to the top model Nikon 35Ti with titanium body and 3D-Matrix-Metering. 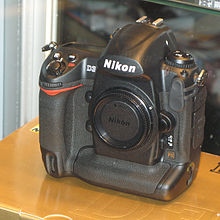 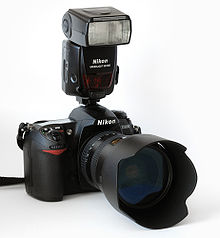 Other lenses for photography and imaging

Nikon uses the term Speedlight for its electronic flash guns. 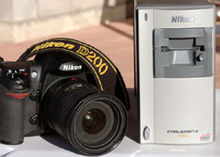 Nikon introduced its first scanner, the Nikon LS-3500 with a maximum resolution of 4096 x 6144 pixels, in 1988. Prior to the development of 'cool' LED lighting this scanner used a halogen lamp (hence the name 'Coolscan' for the following models). The resolution of the following LED based Coolscan model didn't increase but the price was significantly lower. Colour depth, scan quality, imaging and hardware functionality as well as scanning speed was gradually improved with each following model. The final 'top of the line' 35mm Coolscan LS-5000 ED was a device capable of archiving greater numbers of slides; 50 framed slides or 40 images on film roll. It could scan all these in one batch using special adapters. A single maximum resolution scan was performed in no more than 20 seconds as long as no post-processing was also performed. With the launch of the Coolscan 9000 ED Nikon introduced its most up-to-date film scanner which, like the Minolta Dimage scanners were the only film scanners that, due to a special version of Digital ICE, were able to scan Kodachrome film reliably both dust and scratch free. LaserSoft Imaging's scan software SilverFast features a similar technique (iSRD) since end of 2008, that allows every Nikon film scanner to remove dust and scratches from Kodachrome scans. In late 2007 much of the software's code had to be rewritten to make it Mac OS 10.5 compatible. Nikon announced it would discontinue supporting its Nikon Scan software for the Macintosh as well as for Windows Vista 64-bit.[52] Third-party software solutions like SilverFast or Vuescan provide alternatives to the official Nikon drivers and scanning software, and maintain updated drivers for most current operating systems. Between 1994 and 1996 Nikon developed three flatbed scanner models named Scantouch, which couldn't keep up with competitive flatbed products and were hence discontinued to allow Nikon to focus on its dedicated film scanners.

Nikon also manufactures ophthalmic equipment, loupes, monoculars, binocular telescopes, microscopes, laser rangefinders, cameras for microscopy, optical and video-based measurement equipment, scanners and steppers for the manufacture of integrated circuits and liquid crystal displays, and semiconductor device inspection equipment. The steppers and scanners represent about one third of the income for the company as of 2008.[53] Nikon has also manufactured eyeglasses, sunglasses, and glasses frames, under the brands Nikon, Niji, Nobili-Ti, Presio, and Velociti VTI.[54]