Nero Claudius Drusus Germanicus (14 January 38 BC – 14 September 9 BC), born Decimus Claudius Drusus also called Drusus, Drusus I, Nero Drusus, or Drusus the Elder was a Roman politician and military commander. He was a fully patrician Claudian on his father's side but his maternal grandmother was from a plebeian family. He was the stepson of the Emperor Augustus, brother of the Emperor Tiberius, paternal grandfather of the Emperor Caligula, father of the Emperor Claudius, and maternal great-grandfather of the Emperor Nero. He launched the first major Roman campaigns across the Rhine and began the conquest of Germania, becoming the first Roman general to reach the Weser and Elbe rivers. In 12 BC, Drusus led a successful campaign into Germania, subjugating the Sicambri. Later that year he led a naval expedition against Germanic tribes along the North Sea coast, conquering the Batavi and the Frisii, and defeating the Chauci near the mouth of the Weser. In 11 BC, he conquered the Usipetes and the Marsi, extending Roman control to the Upper Weser. In 10 BC, he launched a campaign against the Chatti and the resurgent Sicambri, subjugating both. The following year he conquered the Mattiaci, while defeating the Marcomanni and the Cherusci, defeating the latter near the Elbe. However, Drusus died later that year, depriving Rome of one its best generals.

Drusus was the youngest son of Roman Empress Livia Drusilla from her marriage to Tiberius Claudius Nero. Drusus was born between 18 March 38 BC and 13 April 38 BC. He was born shortly after Livia divorced Tiberius Nero and married Augustus (17 January, 38 BC), giving rise to rumours that Augustus was the real father, although this is widely discredited by modern historians as Augustus had not yet met Livia when Drusus would have been conceived (During his reign, Claudius revived this rumor to give the impression that Augustus was his paternal grandfather in addition to being his maternal great-uncle). Before Augustus married Livia, Tiberius Claudius Nero was declared Drusus' biological father. According to Suetonius, he was born with the praenomen Decimus, but it was later changed to Nero - an unusual example of using a second cognomen as a praenomen rather than an agnomen: "Nero" was a traditional cognomen of the Claudius family, whereas "Drusus" originally belonged to the Livius dynasty. (It is possible that Drusus was originally given the cognomen traditionally belonging to his mother's family, because of the doubts - groundless as they have since proved to be - as to whether he was truly entitled to the cognomen of a man who may have been popularly believed to be not his father: at least the world knew who his mother was.) He was raised in Claudius Nero's house with his brother, the future emperor Tiberius, until his father's death. Drusus and his brother Tiberius developed a famously close relationship in this environment that would last the rest of their lives. Tiberius named his eldest son after his brother (a departure from Roman naming convention), and Drusus did likewise.

Drusus married Antonia Minor, the daughter of Mark Antony and Augustus' sister, Octavia Minor, and gained a reputation of being completely faithful to her. Their children were Germanicus and Claudius, a daughter Livilla (Little Livia), and at least two others who did not survive infancy. After Drusus' death, Antonia never remarried, though she outlived him by nearly five decades. Three Emperors were direct descendants of Drusus, Claudius (his son), Caligula (Germanicus' son, Drusus' grandson), and Nero (Germanicus' grandson, Drusus' great-grandson).

Augustus bestowed many honors on his stepsons. In 19 BC, Drusus was granted the ability to hold all public offices five years before the minimum age. When Tiberius left Italy during his term as praetor in 16 BC, Drusus legislated in his place. He became quaestor the following year, fighting against Raetian bandits in the Alps. Drusus repelled them, gaining honors, but was unable to smash their forces, and required reinforcement from Tiberius. The brothers easily defeated the local Alpine tribes. 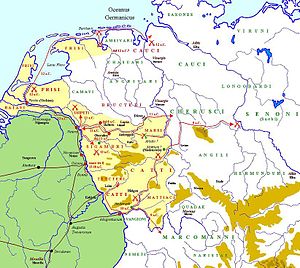 Drusus' battles with the West Germanic tribes 12-9 BC

In 13 BC, Drusus was sent to govern Gaul to quell riots caused by the actions of a previous administrator. While there, a tribe of Germans entered Gaul and proceeded to attack Roman settlements. Drusus mobilized his legions and beat the invaders back across the Rhine. He penetrated deep into German territory, traveling as far as the North Sea and placing a yearly tribute on the Frisii. As a reward, Drusus was made praetor urbanus for 11 BC.

Drusus did not have it in him to stay in Rome. In the spring of his term, he set out for the German border once more. He pushed once more into the territory of the various German tribes, only stopping at the onset of winter. He was attacked while making his way back to Roman territory, but managed to rout the German force. His troops proclaimed him Imperator and he was granted triumphal ornaments, as well as the office of proconsul for the following year. In 10 BC, the Chatti joined with the Sicambri and attacked Drusus' camp, but were easily defeated. Drusus then went to meet Augustus and Tiberius in Lugdunum (at which point Claudius was born), and traveled with them to Rome. He was easily elected Consul for 9 BC, but once more left the city before assuming office. He once again smashed the Chatti, and then began a campaign against the Marcomanni, but was turned back across the Rhine. Drusus died soon after in consequence of a fall from a horse, lingering on for a month after the accident, by which point Tiberius had joined him. Interestingly, soon before his death he wrote a letter to Tiberius complaining about the style in which Augustus ruled. Suetonius reports that he had refused to return to Rome just before his death. Drusus' body was brought back to the city, and his ashes were deposited in the Mausoleum of Augustus. He remained extremely popular with the legionaries, who erected a monument (the Drususstein) in Moguntiacum (modern Mainz) on his behalf. Remnants of this are still standing. His family was granted the hereditary honorific "Germanicus", which was given to his eldest son before passing to his youngest. Augustus later wrote a biography of him which did not survive.

There has been some speculation about the paternity of Drusus, some suggesting that he was Augustus' biological son. However this idea is widely discredited by modern historians as Augustus never acknowledged Drusus as his son, nor did he make any attempt to adopt him. Augustus' only biological child was Julia the Elder, his daughter by Scribonia. She gave birth to the five grandchildren (Gaius Caesar, Lucius Caesar, Agrippa Postumus, Agrippina the Elder, and Julia the Younger); he adopted the boys. Even after the deaths of Gaius and Lucius, and the banishment Postumus Agrippa, Augustus did not adopt Drusus' sons, Germanicus and Claudius. He apparently considered adopting Germanicus, but chose to adopt the much older Tiberius, who was definitely not related by blood, and invested him with the powers of the principate. Augustus seems to have had Tiberius adopt Germanicus as heir because of the latter's marriage to his granddaughter Agrippina (the last of Augustus' living grandchildren not in disgrace) ensured that his own descendents (through a female line) would inherit one day - but not because of any secret blood relationship.

Augustus and Livia were married for 51 years and never had surviving children together, although they had children with other people (Augustus had Julia with Scribonia and Livia had Tiberius and Drusus with their father.) It is very likely that Augustus did know Livia at the time that Drusus was conceived. Claudius Nero became a partisan of the Second Triumvirate after he abandoned Sextus Pompey.