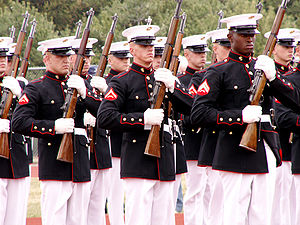 The Drill Purpose Rifle is a definition given to a rifle which has been altered so that it can no longer be fired. Instead it is used solely for drill purposes, training and teaching usually by cadet forces.

In the United Kingdom an example of a drill purpose rifle was the L59A1 Drill Rifle, which was used mainly by the Army Cadet Force. The rifles are clearly labelled with a white band around the stock and the butt of the rifle with the letters DP written in bold black script. In addition, it may be stamped 'DP' above the serial number on the receiver. The rifle was used as a teaching aide. A drill purpose version of the L98A1 Cadet GP Rifle is available, the L103 Cadet Drill Purpose rifle.

In America, exhibition rifle drill has become more popular, due to teams such as the United States Marine Corps Silent Drill Platoon and New Guard America[1]. The Most popular weapons used in America are the M1903A3 Springfield, M1 Garand, and the M14.

Currently, there are three main weapons designed exclusively for military exhibition drill. These are the DrillAmerica replica M-1 rifle offered by Glendale Inc[2]; the Parris Manufacturing Company and Daisy replica M1903A3 Springfield drill rifle, created at the request of the United States Navy; and the Mark-1 facsimile rifle, a light-weight replica weapon modeled after an M1903A3 w/ pistol grip stock.