Dill
This article is about the herb. For other uses, see Dill (disambiguation).

Dill (Anethum graveolens) is a perennial herb. It is the sole species of the genus Anethum, though classified by some botanists in a related genus as Peucedanum graveolens (L.) C.B.Clarke.

Dill originated within an area around the Meditteranean and the South of Russia[1][2]. Zohary and Hopf remark that "wild and weedy types of dill are widespread in the Mediterranean basin and in West Asia."[3]

Although several twigs of dill were found in the tomb of Amenhotep II, they report that the earliest archeological evidence for its cultivation comes from late Neolithic lake shore settlements in Switzerland.[4] Traces have been found in Roman ruins in Great Britain.

In Semitic languages it is known by the name of Shubit. The Talmud requires that tithes shall be paid on the seeds, leaves, and stem of dill.

The name dill comes from Old English dile, thought to have originated from a Norse or Anglo-Saxon word dylle meaning to soothe or lull[citation needed], the plant having the carminative property of relieving gas. In Romania it is called Mărar.

Fresh and dried dill leaves (sometimes called "dill weed" to distinguish it from dill seed) are used as herbs, mainly in Sweden, the Baltic, in Russia, and in central Asia.

Like caraway, its fernlike leaves are aromatic and are used to flavor many foods, such as gravlax (cured salmon), borscht and other soups, and pickles (where the dill flower is sometimes used). Dill is best when used fresh, as it loses its flavor rapidly if dried; however, freeze-dried dill leaves preserve their flavor relatively well for a few months.

Dill seed is used as a spice, with a flavor somewhat similar to caraway but also resembling that of fresh or dried dill weed. Dill seeds were traditionally used to soothe the stomach after meals.[5] Dill oil can be extracted from the leaves, stems and seeds of the plant.

In Arabic, dill seed is called ain jaradeh (means cricket eye) used as a spice in cold dishes like fattoush and pickles.

In Lao cuisine and parts of northern Thailand, dill is known in English as Laotian coriander[6] and Lao cilantro (Lao: ຜັກຊີ, Thai: ผักชีลาว). In the Lao language, it is called Phak See, and in Thai, it is known as Phak Chee Lao.[7] In Lao cuisine, the herb is typically used in mok pa (steamed fish in banana leaf) and several coconut milk-based curries that contain fish or prawns.

In Vietnam, the use of dill in cooking is regional, specifically northern Vietnamese cuisine.

In Iran, dill is known as "Shevid" and is sometimes used with rice and called "Shevid-Polo".

In India, dill is known as 'Savaa' in Hindi or 'Soa' not related to Soy, in Punjabi. In Telugu it is called soya and soya-kura (for herb greens). It is also called 'sapsige soppu' (ಸಪ್ಸಿಗೆ ಸೊಪ್ಪು) in Kannada. In Tamil it is known as Sada kuppi(சதகுப்பி). In Malayalam, it is ചതകുപ്പ(Chathakuppa)or ശതകുപ്പ(Sathakuppa). In Sanskrit, this herb is called Shatapushpa. In Gujrati it is known as hariz. In India, dill is prepared in the manner of yellow Moong dal as a main-course dish. It is considered to have very good anti-gas properties, and hence it is used as mukhwas, or an after-meal digestive. It is also traditionally given to mothers immediately after childbirth.

In Serbia, dill is known as "Mirodjija" and used in addition to soups and dishes, also in potato salads and French fries.

In Canada, dill is a favourite herb to accompany poached salmon.

In Santa Maria, Azores, dill (Endro) is the most important ingredient of the traditional Holy Ghost soup (Sopas do Espírito Santo). Dill is found practically anywhere in Santa Maria, and curiously rare in the other Azorean Islands.

The seed is harvested by cutting the flower heads off the stalks when the seed is beginning to ripen. The seed heads are placed upside down in a paper bag and left in a warm dry place for a week. The seeds then separate from the stems easily for storage in an airtight container. 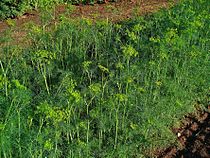 When used as a companion planting, dill draws in many beneficial insects as the umbrella flower heads go to seed. Fittingly, it makes a good companion plant for cucumbers. It is a poor companion for carrots and tomatoes.[8]