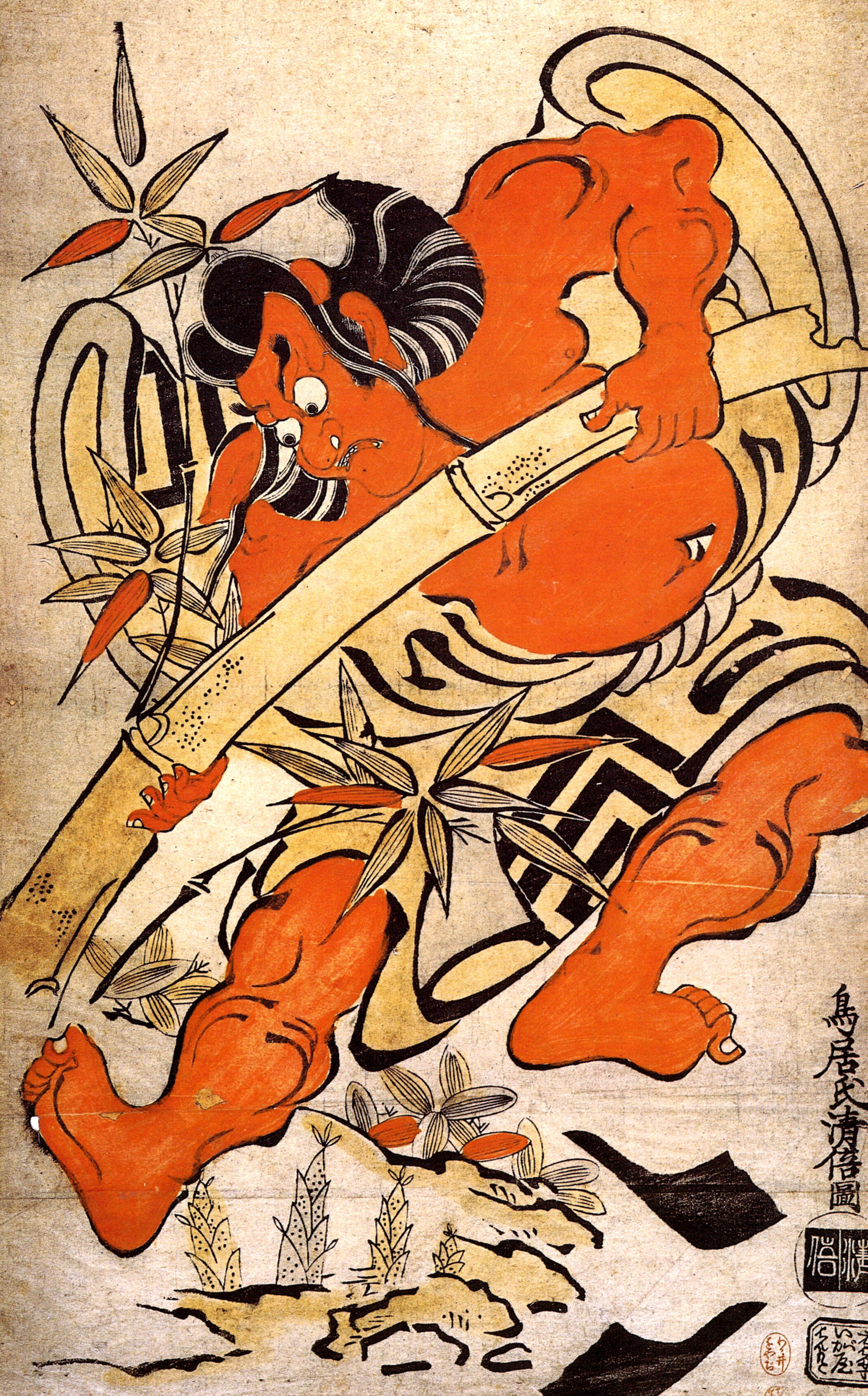 Ichikawa Danjūrō I (初代市川段十郎 [It may interest the reader to note that the kanji (Chinese characters) used to write the name Danjūrō have changed over the generations. Danjūrō I used 段十郎, which he changed to 團十郎 in 1693; this was then simplified in later generations to 団十郎.] , "shodai Ichikawa Danjūrō") (1660-1704) was an early actor in . He remains today one of the most famous of all kabuki actors and is considered one of the most influential. His many influences include the pioneering of the "" style of acting which came to be largely associated with kabuki and with Danjūrō and his successors in the line.

Like many actors, Danjūrō also dabbled in playwriting, which he did under the "" (poetry name) Mimasuya Hyōgo. "Mimasu" (三升) is the name for the "mon" of the Ichikawa family; many actors in the Danjūrō line have since used "Mimasu" or "Sansho", an alternate reading of the same characters, as their "haimyō".

As the originator of the most celebrated and prestigious stage name in kabuki, there have been a great many descendants of Danjūrō I in the kabuki world, some of them quite famous and accomplished themselves. Danjūrō's father, Horikoshi Juzō, was not involved in the theatre, but was an "", something of a street ruffian, but nevertheless a man very much a part of Edo popular urban culture; though not in the theatre himself, he may have been a patron of various types of performances, as well as of the closely related sex industry.

The sons of Danjūrō I were known as Ichikawa Danjūrō II and Ichikawa Sen'ya. The fourth Danjūrō was his grandson; the fifth his great-grandson. His great-great-grandsons, as well as their sons and grandsons were kabuki actors of the Ichikawa family as well. Danjūrō I also had a great many disciples.

A devout follower of Fudō Myōō, one of Japan's , Danjūrō was the first to perform as Fudō onstage, and founded the actors' guild , named after the Fudō temple .

Born in Japan's capital of in 1660, he first performed at the age of 13 at the , under the name . The first to take the name Ebizō, he was thus the founder or originator of this prestigious actor lineage as well. This 1673 performance of "Shitennō Ochigodachi", in which Ebizō played Sakata Kintoki marks not only his first performance, but also the first use of red and black striped makeup, now called "", and thus the nascent origins of the "aragoto" style.

Two years later, taking the name Danjūrō, he performed in the first kabuki presentation based on the Tale of the Soga Brothers. The famous actor print seen here, though produced for a 1697 performance, depicts Danjūrō in the same role, that of . Serving as playwright as well as actor, Danjūrō produced a number of works, several of which were early forms of plays extremely popular later in the and still performed today, though they have undergone great changes over the centuries. Two of these such plays are "", written and premiered in 1684, and "", in 1697.

The period marked the peak of Edo period extravagance and hedonism. Danjūrō was one of the most popular actors in Edo in this period, alongside and . The first "aragoto" performance in was that of "Genji Musha Homare no Seiriki" in 1694; the following year, Danjūrō would be featured in the Edo "", a popular publication ranking actors and performances, as "jō-jō-kichi" (上々吉, higher-higher-excellent) and his annual salary would reach 500 "".

Over the course of his career, Danjūrō performed in, and wrote, a great number of plays. Unlike many later actors, he was not particularly faithful to any one theater, and moved back and forth between them many times. He also performed alongside his son, Ichikawa Kuzō, who would later take his father's name and become . Danjūrō is said to have also been the first kabuki actor to write and to take a poetry name ("haimyō").

While performing at the on , Danjūrō was stabbed and killed onstage by fellow actor .