Land of the Dead

Land of the Dead

Infobox_Film
name = Land of the Dead 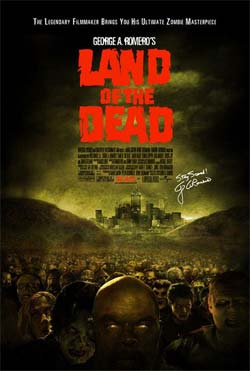 The recently dead inexplicably began returning to life and destroying civilization. These "stenches" as they're called in the movie multiplied rapidly by adding to their ranks with every new victim. Many years later, the still-living in the vicinity have fled to the city of , where a feudal-like government has taken over. Bordered on two sides by rivers and on the other by an electric barricade, the city has become a sanctuary against the undead threat. Fiddler's Green, the center of this fortress city, is where the rich and powerful live in luxury while the rest of the local survivors live in poverty around them. Paul Kaufman (), a tyrannical businessman, rules with an iron fist and overwhelming firepower.

In order to ensure his dominance and upscale lifestyle, Kaufman financed the construction of "Dead Reckoning", a heavily armored that can venture out of the safe zone with relative ease. The vehicle is armed with heavy remote-controlled external machine guns, missile launchers, video cameras, and a fireworks launcher to distract the zombies, which are hypnotized by fireworks and will ignore all else to watch them. Riley Denbo (), the designer of "Dead Reckoning" and leader of the expeditions to retrieve salvageable goods, has decided to retire and leave the safety of the city. Unlike Kaufman, Riley is respected by the citizens of the fortress city for his work to protect them from a dangerous world. Eventually, Riley winds up in jail with his best friend Charlie Houk (), a slow witted member of the "Dead Reckoning" team who happens to be a crack shot with his old M1 Carbine, and Slack (), a female soldier who has been pressed into prostitution and who was almost killed in a recent cage match with a pair of zombies. It was freeing Slack from the cage that led to Riley's incarceration.

Meanwhile, Cholo DeMora (), the cocky second in command of the "Dead Reckoning" team, has become a renegade after being denied the opportunity to buy an apartment in by Kaufman, looking to even the score. DeMora hijacks "Dead Reckoning" and threatens to destroy Fiddler's Green unless his demands are met. Kaufman turns to Riley to stop Cholo, resulting in Riley, Slack, and Charlie's release from prison. A trio of soldiers, Pilsbury, Motown, and Manolete, are assigned to assist them, but their mission is to recapture "Dead Reckoning", whether Riley and his allies want them to or not. Manolete is soon bitten, and Motown later tries to kill Cholo only to be killed herself by a bullet from Slack, after being assaulted by a zombie, while Pilsbury changes sides and starts helping Charlie and Slack. As Riley finally catches Cholo, he convinces him to allow him to take "Dead Reckoning" and leave the city to head north, leaving Cholo and his "partner in crime," Foxy, with a truck to go west. Shortly after this Cholo is bitten by a . Cholo chooses to become a zombie rather than be shot immediately and wishes Foxy luck, letting him drive off.

The zombies are beginning to regain vestigial memories of their former lives: a brass band blows ineffectively on their aging horns, a gardener pushes his rusty lawn mower, a dead couple walk hand-in-hand, and a gas station attendant with the name tag "Big Daddy" lumbers out every time someone trips the pump bell. Big Daddy is particularly intelligent for a zombie (in a continuance of the "Bub" plot-line from "Day of the Dead"), quickly learning to operate a stolen firearm and becoming the undead protagonist amongst his fellow zombies. He also overcomes the effect of the fireworks, which the other zombies also do after being exposed again. Directing his fellow zombies, Big Daddy leads an attack on the human city in retaliation for the constant raids carried out by "Dead Reckoning". With the electric fences proving impregnable to the zombies, Big Daddy realizes that they can simply walk across the riverbed without drowning.

As retribution after being shot by Kaufman, Big Daddy trails the fleeing despot to an underground garage where Kaufman plans to escape. Big Daddy finds Kaufman locked in his car next to a gas pump and, in a moment of undead "revelation," begins pumping gas into the cab through a hole in the windshield. Apparently satisfied, he lumbers out of the garage.

Now a member of the undead, Cholo has located Kaufman, shooting at him before grappling with him. However, Big Daddy returns and once again displays his intelligence by rolling a burning road flare toward Kaufman's gasoline-soaked vehicle. It explodes, hurling Kaufman and the undead Cholo away.

Meanwhile, Denbo and "Dead Reckoning" have fought to free the inhabitants of the now-overrun city. At the electric fence, the crew discovers a massacre; with nowhere to run, the citizens fell victim to the zombies. After destroying the fence and relieving the victims from their final agony, the crew is now despondent, since it appears as if the city has been wiped out. However, most of the city's lower-class inhabitants emerge from the carnage. While many had simply run, and died, these others hid, and emerged unscathed. With the destruction caused by the zombies, the class system no longer exists, leveling the playing field for the lower-class. The zombies withdraw instead of attacking them.

Riley orders Pretty Boy (Joanne Boland), the navigator of "Dead Reckoning" to refrain from shooting Big Daddy with the vehicle's weaponry as the zombies leave, because he realizes that, like them, he's "just looking for a place to go." Riley and his friends leave the city in "Dead Reckoning", striking out for . As they leave, they fire all of "Dead Reckoning"'s fireworks in a display of celebration.

*Director George Romero's voice can be heard as one of the puppeteers in the "Punch & Judy" stand in the village, shouting "Take that, you smelly zombie!"
*George Romero's daughter, Christina Romero, makes an appearance as a soldier and is credited as the "High noon soldier".
*, who is the second unit director, make-up artist and special effects supervisor for the film, also belongs to the small elite of people who have appeared in more than one of Romero's zombie movies. He is the bridge keeper zombie in "Land of the Dead", while playing Private Johnson in "Day of the Dead" and the Surgeon Zombie in "".
* can be briefly seen as a zombie (credited as "Machete Zombie"), reprising his character Blades from "Dawn of the Dead". This marks the first time an actor has reprised a role in a Romero zombie movie.
* and have cameos as the photo zombies, due to Romero's love of their affectionate zombie send-up "". They also appear on the official movie poster and Director's Cut DVD. Pegg would later make a voice over cameo in "".
*During the scene on the water front (when the zombies stand before the river overlooking the city), a goofy-looking bald zombie from "" can be seen as Big Daddy emerges. He is stepping back as Big Daddy steps forward.
*Actor , who appeared in the 2004 remake of the original "", makes a cameo credited as the "Butcher".

Filming took place in Toronto and , .

gave the film three stars out of four for what he considered its skillful and creative allusions, something that he argued was pervasive among Romero's previous three installments that contained numerous satirical metaphors to the reality of American life. In this installment Ebert noted the similarities between the fireworks mesmerizing the s and the tactics applied during the and the movie's distinction between the rich and poor, those that live in Fiddler's Green and those that live in the slums, something he considered to be Romero's take on the rising gap between rich and poor in America. [cite news | url=http://rogerebert.suntimes.com/apps/pbcs.dll/article?AID=/20050623/REVIEWS/50614001 | title=Land of the Dead | accessdate=2007-10-07 ] Michael Wilmington of "" awarded the film four stars, writing, "It's another hard-edged, funny, playfully perverse and violent exercise in movie fear and loathing, with an increasingly dark take on a world spinning out of control. By now, Romero has become a classicist who uses character and dialogue as much as stomach-turning special effects to achieve his shivers." [Michael Wilmington. "Movie Review: "Land of the Dead." "Chicago Tribune", June 23, 2005. url=http://chicago.metromix.com/movies/review/movie-review-land-of/159569/content] "" declared it "the American movie of the year." ["The New York Sun", "What To See This Week," June 24, 2005. Author: N.L.]

Several film-makers including and paid tribute to George Romero in a "Land of the Dead" special. said: "Finally someone was smart enough to realize that it was about time, and gave George the tools. It should be a cause of celebration amongst all of us that has started another ceiling. It's really a momentous occasion ..." [ [http://www.ifilm.com/video/2673901 Land of the Dead - George A. Romero Tribute Reel - Movie Trailers & Clips - SPIKE Powered By IFILM ] ]

Overall critical reaction was mostly positive; the film received very favorable reviews from "", "", "", "Variety", "Slate" and "". The film earned a 74% positive rating at the movie-review compilation website (though the "Cream of the Crop" critics' reactions were slightly more mixed, giving the film a 68% rating overall). [ [http://www.rottentomatoes.com/m/land_of_the_dead/ George A. Romero's Land of the Dead - Movie Reviews, Trailers, Pictures - Rotten Tomatoes ] ]

It is the first movie in the series to receive an MPAA rating for its theatrical release. Romero had said for years that he would film two versions; an "R" rated cut for the theatres and first , and an unrated cut for the second DVD release. Both DVDs were released in the U.S. on October 18, 2005. Rumors suggested that Romero shot alternate, less explicit, gore scenes for the theatrical release, but this is not entirely accurate. The more extreme instances of gore (e.g a woman having her navel piercing graphically torn out by a zombie) were obscured by foreground elements filmed on , so that these overlayed elements could be easily removed for the unrated DVD. Other ways to obscure blood in order to get an R-rating were achieved by simply trimming the grislier shots by a few seconds, by digitally repainting blood so that it is more black than red, or by digitally painting the blood out altogether.

The Canadian provinces of , and gave both the theatrical version and DVD version a rating of "18A", though it was only given a 13+ rating in .

In the UK the BBFC gave it a "15" certificate for both the theatrical version and the unrated version. (The UK "Director's Cut" DVD was rated "18" due to extras being rated higher than the feature itself).

The movie was banned in . [cite web |url=http://www.moviesonline.ca/movienews_5512.html |title= Land of the Dead banned in the Ukraine|accessdate=2008-04-09 |format= |work=MoviesOnline ]

*Romero, in the DVD commentary, suggests that the Santa zombie seen in "Dead Reckoning" is the same as the Santa biker from "Dawn of the Dead".
*"", a video game based on the movie was released for and PC on October 18, 2005.
*At the 16th edition of Universal Orlando's Halloween Horror Nights in , a show featuring the vehicle borrowed heavily from the film, including the use of fireworks to distract approaching zombies and the words "Dead Reckoning" painted on the side of Robosaurus.
*Romero used the Universal logo of the 1930s as a way of paying tribute to the classic Universal horror films of that period.
*This film reunites and , who previously worked together in "Super Mario Bros."