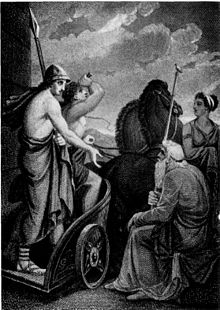 /təˈlɛməkəs/; Greek: Τηλέμαχος, Tēlemakhos, literally "far-fighter")[1] is a figure in Greek mythology, the son of Odysseus and Penelope, and a central character in Homer's Odyssey. The first four books in particular focus on Telemachus' journeys in search of news about his father, who has been away at war. Therefore, they are traditionally accorded the collective title the Telemachy.[2] 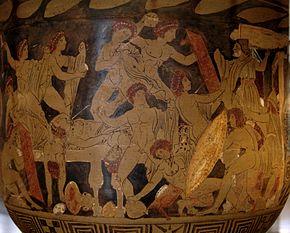 Slaughter of the suitors by Odysseus and Telemachus, Campanian red-figure bell-krater, ca. 330 BC, Louvre (CA 7124)

In the Odyssey by Homer, under the instructions of Athena, Telemachus spends the first four books trying to gain knowledge of his father, Odysseus, whom he has never met. At the outset of Telemachus' journey, Odysseus has been absent from his home at Ithaca for twenty years due to the Trojan War and the intervention of Poseidon. During his absence, Odysseus' house has been occupied by hordes of suitors seeking the hand of Penelope.[4] Telemachus first visits Nestor and is well received by the old man who regales him with stories of his father's glory. Telemachus then departs with Nestor's son Peisistratus,[5] who accompanies him to the halls of Menelaus and his wife Helen. Whilst there, Telemachus is again treated as an honored guest as Menelaus and Helen tell complementary, yet contradictory stories of his father's exploits at Troy.[6]

The Odyssey returns focus to Telemachus upon his father's return to Ithaca in Book XV. He visits Eumaeus, the swineherd, who happens to be hosting a disguised Odysseus. After taking his son's measure, and at the urging of Athena, Odysseus reveals his identity to Telemachus, and the two begin plotting the slaughter of the suitors.[7]

When Penelope challenges the suitors to string Odysseus' bow and shoot an arrow through the handle-holes of twelve axeheads, Telemachus is the first to attempt the task. He would have completed the task, nearly stringing the bow on his fourth attempt; however, Odysseus subtly stops him before he can finish his attempt. Following the failure of the suitors at this task, Odysseus reveals himself, and he and Telemachus bring swift and bloody death to the suitors.[8]

The Telegony was a short 2-book epic poem recounting the life and death of Odysseus after the events of the Odyssey. In this mythological postscript, Odysseus is accidentally killed by Telegonus, his unknown son by the goddess Circe. After Odysseus' death Telemachus returns to Aeaea with Telegonus and Penelope, and there marries Circe.

From the Dictionary of Greek and Roman Biography and Mythology:

The son of Odysseus and Penelope (Hom. Od. i. 216). He was still an infant at the time when his father went to Troy, and in his absence of nearly twenty years he grew up to manhood. After the gods in council had determined that Odysseus should return home from the island of Ogygia, Athena, assuming the appearance of Mentes, king of the Taphians, went to Ithaca, and advised Telemachus to eject the troublesome suitors of his mother from his house, and to go to Pylos and Sparta, to gather information concerning his father. Telemachus followed the advice, but the suitors refused to quit his house; and Athena, in the form of Mentes, accompanied Telemachus to Pylos. There they were hospitably received by Nestor, who also sent his own son to conduct Telemachus to Sparta. Menelaus again kindly received him, and communicated to him the prophecy of Proteus concerning Odysseus (Hom. Od. i.–iv.). From Sparta Telemachus returned home; and on his arrival there, he found his father, with the swineherd Eumaeus. But as Athena had metamorphosed him into a beggar, Telemachus did not recognise his father until the latter disclosed to him who he was. Father and son now agreed to punish the suitors; and when they were slain or dispersed, Telemachus accompanied his father to the aged Laertes. (Hom. Od. xv.–xxiv.; comp. Odysseus.) In the Post-Homeric traditions, we read that Palamedes, when endeavouring to persuade Odysseus to join the Greeks against Troy, and the latter feigned idiocy, placed the infant Telemachus before the plough with which Odysseus was ploughing (Hygin. Fab. 95; Serv. ad Aen. ii. 81; Tzetz. ad Lycoph. 384; Aelian, V. H. xiii. 12.). According to some accounts, Telemachus became the father of Perseptolis either by Polycaste, the daughter of Nestor, or by Nausicaa, the daughter of Alcinous (Eustath. ad Hom. p. 1796; Dict. Cret. vi. 6.). Others relate that he was induced by Athena to marry Circe, and became by her the father of Latinus (Hygin. Fab. 127; comp. TELEGONUS), or that he married Cassiphone, a daughter of Circe, but in a quarrel with his mother-in-law he slew her, for which in his turn he was killed by Cassiphone (Tzetz. ad Lycoph. 808.). He is also said to have had a daughter called Roma, who married Aeneas (Serv. ad Aen. i. 273.). One account states that Odysseus, in consequence of a prophecy that his son was dangerous to him, sent him away from Ithaca. Servius (ad Aen. x. 167) makes Telemachus the founder of the town of Clusium in Etruria.

In Contest of Homer and Hesiod, it is alleged that the Roman Emperor Hadrian asked the Delphic Oracle about Homer's birthplace and parentage. The Oracle replied that Homer came from Ithaca and that Telemachus was his father by Epicasta, daughter of Nestor.[9][10]

According to Aristotle and Dictys of Crete, Telemachus married Nausicaa, King Alcinous' daughter, and fathered a son named Perseptolis or Ptoliporthus.

Telemachus is the subject of François Fénelon's The Adventures of Telemachus, Son of Ulysses (1699), a scathing attack on the monarchy of France.