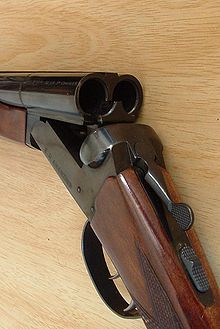 A view of the break-action of a typical side-by-side double-barrelled shotgun, with the Anson & Deeley boxlock action open and the extractor visible. The opening lever and the safety catch can also be clearly seen.

A double-barreled shotgun is a shotgun or combination gun with two parallel barrels, allowing two shots to be fired in quick succession.

Double-barreled shotguns, often known as doubles, are almost universally break open actions, with the barrels tilting up at the rear to expose the breech ends of the barrels for unloading and reloading. Since there is no reciprocating action needed to eject and reload the shells, doubles are more compact than repeating designs such as pump action or Lever Action shotguns.

Doubles come in two basic configurations, the side by side or SxS and the over/under or O/U, indicating the arrangement of barrels. The original double barreled guns were nearly all SxS designs, which was a more practical design in the days of muzzle-loading firearms. Early cartridge shotguns also used the SxS action, because they kept the exposed hammers of the earlier muzzle-loading shotguns they evolved from. When hammerless designs started to become common, the O/U design was introduced, and most modern sporting doubles are O/U designs

One significant advantage that doubles have over single barrel repeating shotguns is the ability to use more than one choke at a time. Some shotgun sports, such as skeet, use crossing targets presented in a narrow range of distance, and only require one level of choke. Others, like sporting clays, give the shooter targets at differing ranges, and targets that might approach or recede from the shooter, and so must be engaged at differing ranges. Having two barrels lets the shooter use a more open choke for near targets, and a tighter choke for distant targets, providing the optimal shot pattern for each distance.

Their disadvantage lies in the fact that the barrels of a double barreled shotgun, whether O/U or SxS, are not parallel, but, slightly angled so that shots from the barrels converge, usually at "40 yards out". For the SxS configuration, the shotstring continues on its path to the opposite side of the rib after the converging point; for example, the left barrel's discharge travels on the left of the rib till it hits dead center at 40 yards out, after that, the discharge continues on to the right. In the O/U configuration with a parallel rib, both barrels' discharges will keep to the dead center, but the discharge from the "under" barrel will shoot higher than the discharge from the "over" barrel after 40 yards. Thus, double barrel shotguns are accurate only in very short ranges, though the range of their ammunition easily exceeds four to six times that range.

The early doubles used two triggers, one for each barrel. These were located front to back inside the trigger guard, the index finger being used to pull either trigger, as having two fingers inside the trigger guard can cause a recoil induced double-discharge. In double trigger designs, it is often possible to pull both triggers at once, firing both barrels simultaneously, though this is generally not recommended as it doubles the recoil, battering both shooter and shotgun. Discharging both barrels at the same time has long been a hunting trick employed by hunters using 8 gauge "elephant" shotguns, firing the two two-ounce slugs for sheer stopping power at close range.

Later models used a single trigger that would alternately fire both barrels, called a single selective trigger or SST. The SST does not allow firing of both barrels at once, since it must be pulled twice in order to fire both barrels. The change from one barrel to the other may be done by a clockwork type system, where a cam alternates between barrels, or by an inertial system where the recoil of firing the first barrel selects the next barrel. Generally there is a method of selecting the order in which the barrels of an SST shotgun fire; commonly this is done through manipulation of the safety, pushing to one side to select top barrel first and the other side to select bottom barrel first.

One of the advantages of the double, with double triggers or SST, is that a second shot can be taken almost immediately after the first. Pump-action and semiautomatic guns require that the fired round be ejected and a new one be loaded, which takes time. Even the few fully automatic shotguns which have been built, such as the USAS-12 have cyclic rates that can be exceeded by a quick shooter with a double.

Regulation is a term used for multi-barreled firearms that indicates how close to the same point of aim the barrels will shoot. Regulation is very important, because a poorly regulated gun may hit consistently with one barrel, but miss consistently with the other, making the gun nearly useless for anything requiring two shots. Fortunately, the short ranges and spread of shot provide a significant overlap, so a small error in regulation in a double will often be too small to be noticed. Generally the shotguns are regulated to hit the point of aim at a given distance, usually the maximum expected range since that is the range at which a full choke would be used, and where precise regulation matters most.

The double-barreled shotgun is seen as a weapon of prestige and authority in rural parts of North India where it is known as 'a dunali', literally meaning "two pipes". It is especially common in Bihar, Purvanchal, Uttar Pradesh, Haryana and Punjab.[citation needed]