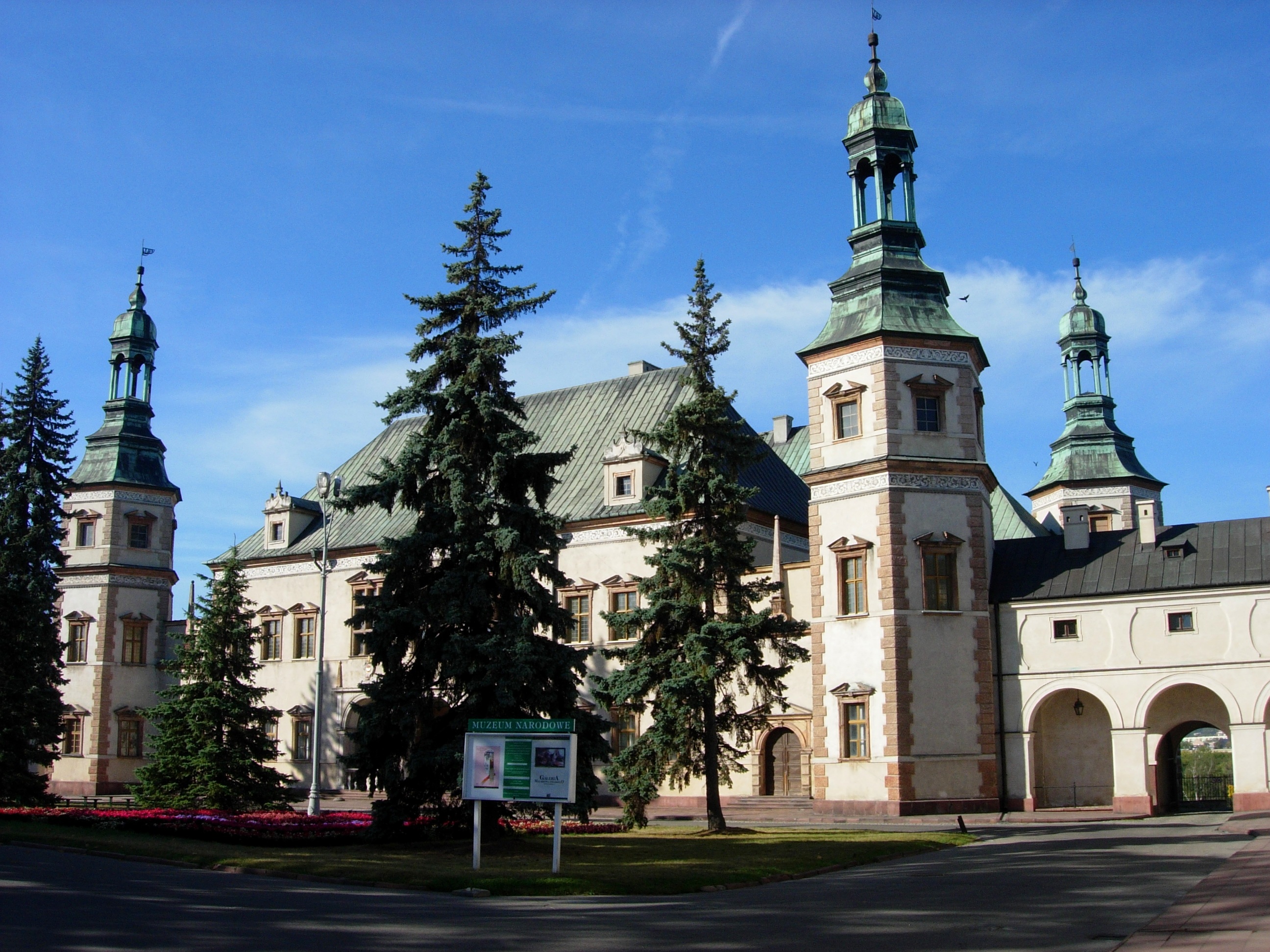 The area of Kielce has been inhabitated at least since 5th century BC. Until 6th or 7th century the banks of the were inhabitated by who most probably were the name-sake for the location. They were driven out by a of who started hunting in the nearby huge forests and had settled most of the area now known as Małopolska and present-day Świętokrzyskie Voivodeship. The lands of Wiślanie were at first subdued by , however they soon came under the power of the dynasty and became a part of Poland. According to a local legend, Mieszko, son of was attacked by a band of brigands in a forest. He was saved by a vision of . In the place of his vision he erected a wooden church.

In reality the area of the was almost unpopulated until 11th century when the first hunters established permanent settlements at the outskirts of the mountains. They needed a place to trade furs and meat for grain and other necessary products and so the market of Kielce was formed. In early 12th century the new settlement became a property of the Bishops of who built a wooden church and a manor. In 1171 a stone church was erected by bishop Gedeon Gryf. At the times of a parochial school in Kielce was started in 1229. By 1295 the town was awarded with the . In mid-13th century the town was destroyed by invasion of , but it quickly recovered.

The area around Kielce was rich in minerals such as ore, ore, and , as well as limestone. In 15th century Kielce became a significant centre of metallurgy. There were also several glass factories and armourer shops in the town. In 1527 bishop Piotr Tomicki founded a bell for the church and between 1637 and 1642 palace was erected near the market place. It is one of the very few examples of French Renaissance architecture in Poland and the only example of a magnate's manor from the times of to survive the World War II.

During The Deluge the town was pillaged and burnt by the Swedes. Only the palace and the church survived, but the town managed to recover under the rule of bishop Andrzej Załuski. By 1761 Kielce had more than 4,000 inhabitants. In 1789 Kielce were nationalised and the burgers were granted the right to elect their own representatives in . Until the end of the century the city's economy entered a period of fast growth. A was founded as well as several brick manufactories, a horse breeder, hospital, school and a religious college.

As a result of the 3rd Partition the town was annexed by . During the Polish-Austrian War of 1809 it was captured by prince and joined with the , but after the fall of in 1815 it was joined with the Kingdom of Poland. For a brief period when Kraków was an independent (), Kielce became the capital of the . Thanks to the efforts by Kielce became the centre of the newly-established Old-Polish Industrial Zone ("Staropolski Okręg Przemysłowy"). The town grew quickly as new mines, quarries and factories were constructed. In 1816 the first Polish technical university was founded in Kielce. However, after Staszic's death the Industrial Zone declined and in 1826 the school was moved to and became the .

In 1830 many of the inhabitants of Kielce took part in the against Russia. In 1844 a priest intended a local uprising to liberate Kielce from Russian rule, for which he was sent to . In 1863 Kielce took part in the . As a reprisal for insubordination the tsarist authorities closed all Polish schools and turned Kielce into a military garrison city. was banned. Because of that many gymnasium students took part in the and were joined by factory workers.

After the outbreak of World War I, Kielce were the first Polish city to be liberated from Russian rule by the under . After the war when Poland regained its independence after 123 years of Partitions, Kielce became the capital of Kielce Voivodeship. The plans of strengthening of Polish heavy and war industries resulted in Kielce becoming one of the main nodes of the ("Centralny Okręg Przemysłowy"). The town housed several big factories, among them munitions factory "Granat" and food processing plant Społem.

During the Polish Defensive War of 1939 main part of the defenders of as well as armoured brigade of General were either from Kielce or from its close suburbs. During the occupation that lasted for most of the World War II the town was an important centre of resistance. There were several resistance groups active in the town (among them the (AK) and the (GL)).

*Theft of 2 tons of TNT from the "Społem" college of higher education, which were then used by the partisans to make hand grenades.
*The daring escape from jail in Kielce of a dozen or so AK members, organised in November 1942 by Stanisław Depczyński.
*A grenade attack by a unit of the GL on the Smoleński coffee shop, killing 6 Germans including a major in the SS (February 1943).
*Assassination of the noted Gestapo officer Franz Wittek on 15 June 1944, by a unit under 2Lt. Kazimierz Smolak on the corner of Solna and Paderewskiego streets. One of the attackers died during the attack and a further four lost their lives not long afterwards. This was not the first assassination attempt against Wittek. Already in 1942 Henryk Pawelec fired at him in the market square, but his pistol misfired. In February 1943 a unit under the command of Stanisław Fąfar shot at Wittek by the Seminarium building, but Wittek, although wounded by 14 bullets, survived.
*Successful assassinations of local collaborators, including the shooting of Jan Bocian in broad daylight in a shop in Bodzentyńska street.
*An attack on the factory of C. Wawrzyniak in March 1943, terrorizing and disarming the "volksdeutscher" workers and destroying the machinery.
*An attack on the "Hasag" factory in May 1943 and the takeover of the Kielce Herbskie railway station.

Moreover, the hills and forests of became a scene of heavy partisan activity. A small town of located some 30 kilometres from Kielce became the capital of the so-called "Pinczów Republic", a piece of Polish land controlled by the partisans. The Swietokrzyskie Mountains Home Army District fought against the Germans long before the started inflicting heavy casualties on the occupying forces and later taking part in the final liberation of their towns and cities in January 1945. During the war many of inhabitants of Kielce lost their lives.

On 4 July 1946 Kielce was the unfortunate venue of an antisemitic pogrom that left 37 Jews killed by local polish population after allegations of .

On the eve of the Second World War there were 24,000 Jewish inhabitants in Kielce, which were around one-third of the population at the time. Immediately after the German occupation in September 1939 action have been taken against the Jews - fines, confiscation of property, forced labour, etc' were forced on the Jewish population. In April 1941 the Jewish was established and the Jews were forced to move into it. Many of the Jews were forced labour at a German ammunition plant. In August 1942 the extermination of the Jewish ghetto has started and in 5 days all the Jews in the ghetto but 2,000 Jews who were sent to another forced labour camp were sent to the .

After the war some of the Jews came back to Kielce but on July 4, 1946 after an allegations of blood libel over 35 Jews were murdered by the local polish population, see .

Members of Parliament () elected from Kielce constituency in 2005: