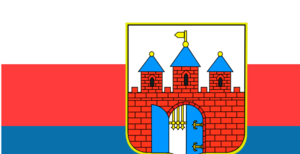 Bydgoszcz is part of the metroplex with Toruń, only 45 km away, and over 850,000 inhabitants. Bydgoszcz is the seat of Casimir the Great University, University of Technology and Life Sciences and a conservatory as well as a Collegium Medicum of . Bydgoszcz has a famous Concert Hall (Filharmonia Pomorska), opera house Opera Nova, From the there are flights to , London, , , , , , , and Düsseldorf-Weeze as well charter flights to , and . Thanks to its location between Vistula and Odra water system on the , the city is an important link in a water system connected via Noteć, Warta, Odra, Elbe with the Rhine and Rotterdam.

Originally a fishing settlement called "Bydgozcya"Fact|date=February 2007 ("Bydgostia" in Latin), the city became a stronghold for the Vistula trade routes. In the 13th century it was the site of a , first mentioned in 1238. The city was occupied by the from 1331&ndash;1337, and later by King , who granted the city municipal rights on 19 April 1346. The city increasingly saw an influx of s after that date.

In the 15th-16th centuries Bydgoszcz was a significant site for corn trading. The was signed in the city in 1657.

Bydgoszcz followed the history of until 1772, when it was annexed by the in the and incorporated into the and, later, . During this time, a canal was built from Bydgoszcz to which connected the north-flowing Vistula River via the Brda to the west-flowing , which in turn flowed to the via the .

In 1807 Bydgoszcz became part of the . In 1815 it returned to Prussian rule as part of the autonomous (the after 1848) and the capital of the Bromberg region. After 1871 the city was part of the . After World War I and the Great Poland Uprising, Bydgoszcz was annexed to Poland in 1919. It shifted in 1938 to the .

From 1939-45 during World War II, Bydgoszcz was overrun by and annexed to the . On September 3 1939, shortly after the war started, the incident occurred in which numerous and were killed; the incident was used by for retaliation against Poles after Bydgoszcz was occupied by the on September 9. The city's ish citizens were repressed, as thousands of people were sent to concentration camps and/or executed. Bydgoszcz was the site of , a female subcamp of Stutthof. The subcamp staffed several female SS guards () and was commanded by the Johanna Wisotzki and a male commandant. A deportation camp was situated in Smukała village, now part of Bydgoszcz. According to "", 37,000 citizens of the city died during the war. [http://encyklopedia.pwn.pl/10867_1.html]

In 1945 Bydgoszcz was liberated and annexed again to Poland.

In 1981 's activists were violently suppressed in Bydgoszcz.

Bydgoszcz is one of the biggest railroad junctions in Poland, with two important lines crossing there - the east-west connection from to and the north-south line from to (see: ). There are also secondary-importance lines stemming from the city, to and to .

Among rail stations located in the city, there are:

* Filharmonia Pomorska im. Ignacego Paderewskiego (Ignacy Paderewski's Concert Hall) - thanks to superbly designed acoustic qualities of the main concert hall, it is one of the best classical music concert halls in Europe.

* Concerts of popular music in Bydgoszcz are usually held in Filharmonia Pomorska, , Zawisza and Polonia stadiums as well as open plains of Myslecinek's Rozopole on the outskirts of the city.

* Teatr Polski im. Hieronima Konieczki (Hieronim Konieczka's Polish Theatre) - despite its name, theatre offers a wide variety of shows both of national and foreign origin. It also regularly plays hosts to a large number of touring shows. Once a year, in autumn, "Festiwal Prapremier" is organized: the most renowned Polish theatres stage their latest premieres.
* Opera Nova (The Nova Opera)

It is also said that spent some time in the city of Bydgoszcz, where, in his memory, a figure was recently mounted in a window of a tenement, overseeing the Old Town. At 1:13 p.m. and 9:13 p.m. the window opens and Pan Twardowski appears, to the accompaniment of weird music and devilish laughter. He takes a bow, waves his hand, and then disappears. This little show gathers crowds of amused spectators.

* , a female subcamp of the German Stutthof, located in Bydgoszcz.
* ( _pl. Departament Bydgoski), a unit of administrative division and local government in the from 1806-1815.
*