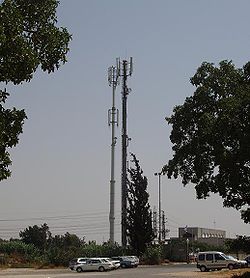 The Communications system in Israel is the most developed in the Middle East, although it is not the biggest. Israel's system consists of Coaxial cables, Optical fibers, and Microwave radio relay.

The 1980s brought a revolution to the communication market in Israel:

This decade was marked by developments in cellular communications, Internet, commercial television, and multichannel television platform such as cable television and satellite television.

The Second Israeli Broadcasting Authority was established and the first Israeli commercial channel – Channel 2 began to broadcast on the November 4, 1993. This began the era of television ratings in Israel. The original agreement was that the broadcasting days of the channel were distributed among three broadcasting companies in order not to have a direct competition between them.[citation needed]

The multichannel television platform in Israel began when the cables TV companies were established. Every company had a monopoly in a certain area of the country (according to a franchise given by the Ministry of Communications). For the first time, the Israeli public became exposed to tens of foreign channels from other countries around the world (which overtook the place of the Jordanian and Lebanese channels which were the only foreign channels received in Israel until then), and to new local channels on the cables: The children channel, The sports channel, The family channel, and the films channel. The move brought to almost total elimination of the pirated cables broadcasting in the country.[citation needed]

The Israeli Pirate radios experienced prosperity which happened in tandem with the establishment of legal regional radio stations, and to the reorganization of the military radio stations in 1993 (the establishment of Galgalatz in tandem with the Israel Defense Forces Radio, instead of the former two stations "Army 1" and "Army 2"). In spite of all the changes in the field of radio broadcasting, this medium lost the majority of the listeners ratings during the nineties, and by the end of the decade, the radio was considered to be a communication medium which had few listeners in relatively to the television.[citation needed]

Although the majority of homes in Israel still receive daily newspapers nowadays, in this decade many main newspapers were closed, including Hadashot, Al HaMishmar, and Davar.[citation needed]

In the mid-nineties, Internet and emailing became prevalent in Israel. Back then the connection to the Internet had to be done by means of dial-up internet access to the local Internet service providers such as NetVision and Internet Gold.[citation needed]

In 1994, Cellcom joined the cellular communication market in Israel. At the start, the company experienced different problems with the devices they provided, when their users experienced many disconnections and intermittence during conversations.[1]

In 1999, Partner Communications Company joined the cellular communication market in Israel with the brand-name Orange. Partner was the first company which built network foundations in Israel which worked under GSM technologies.[citation needed]

In the first decade of the 21st century the main emphasis has been on digitization and the shift to mobile technologies, as the individual remains connected to the world 24/7.

In 2000, the Israeli satellite television provider Yes was established. At the time it was established, there were still three active cable companies in Israel: Tevel, Matav and Arutzay Zahav. The competition with Yes caused a big loss of members amongst the cable TV companies which urged them to merge. In order to strengthen Yes, which was relatively new, the regulator postponed his approval to the merger of the cable companies. In 2003, the cable companies began to act under the brand-name of the Hot. At the start of 2007, the companies completed the merging. In this decade Hot and Yes inserted the use of the digital set-top boxes, and with them it became possible to receive digital broadcasts (improvement in the quality of reception of the television channels), and additionally also enables games channels, video on demand (V.O.D) and nowadays they even supply digital set-top boxes which contain advanced DVR technologies which are capable of pre-recording show (Hot Magic, Yes Max). HOT has put a big emphasis on encouraging production of local Israeli movies, while YES, in contrast, puts more emphasis on purchasing foreign TV series and movies. The struggle between the two companies is still its intense.[citation needed]

Under the inspection of the Second Israeli Broadcasting Authority, an additional Israeli terrestrial-commercial channel was established on 28 January 2002 – Channel 10. This move started a competition among the commercial channels. Channel 10 purchased for itself hosts and actors from Channel 2 and Channel 1. In spite of these procurement actions, the channel is still considered to be inferior in the amount of its viewers relatively to the other channels.[citation needed]

In 2005, an additional bid took place in channel 2, in which "Keshet" and "Reshet" were chosen to be the channel's broadcasts to the consequent decade.[citation needed]

Broadband Internet became prevalent in the majority of homes in Israel. Bezeq stopped being a monopoly in the field of the landline communications, when Hot started offering telephony services through the cables infrastructures.[citation needed]

In middle of the decade due to the popularity which the hi-speed internet and VoIP Technolegies gained amongst the Israelis, at first Israelis were able to conduct international conversations free of charge or at lower rates through the Internet due to the link between VoIP networks such as Skype and Vonage to the traditional telephony networks in Israel and abroad.[citation needed]

In middle of the decade, all the portable phone numbers in Israel were changed from six to seven digits including a new area code, due to the massive amount of unique cellular phone numbers.[citation needed]

In the field of cellular communications third generation digital networks were created.[citation needed]

On March 1, 2006 The Israel Postal Authority became a Government-owned corporation, the Israel Postal Company, as a preceding stage to the opening of the mail market to competition.[citation needed]

On December 17, 2007 the Israeli parliament approved new law which enables the Israeli police and other law enforcement bodies to accesses communication data without judicial inspection.[citation needed]

The mail field in Israel treads towards competition. The Mail Authority became the Israeli Postal Mail Service (still in governmental ownership). Gradually, they enabled additional companies to enter the market of postal deliveries of mail with a weight up to half a kilogram; this was done so that they could compete with the governmental mail company allowing the postage rates to drop.

There are currently six companies in Israel which are in charge of the landline telephony field: Bezeq, Hot, 012 Smile, Globcall, Cellcom and Orange. Bezeq is the oldest of all of them and is reputed to have a monopoly in the field. Hot uses its cables infrastructure in order to provide telephony services. The cables infrastructure is currently not yet spread throughout the entire country and therefore not every house in Israel can be a member of Hot; in comparison, Bezeq has landline infrastructure in all towns and villages in the country. The strategy of 012, Globcall, Cellcom and Orange is different from the former two in that they did not rush to establish a new physical infrastructure; rather, they provide telephone services which are based on the infrastructure of Bezeq and Hot, by means of Internet telephony technologies and additional technologies.

There are currently four companies in Israel which are in charge of the international telephony field: Bezeq International (prefix 014), 012 Smile, 013 NetVision and XFone (prefix 018). All the companies offer memberships services which get their customers cheaper rates for international calls. A member which dials abroad needs to add the prefix 00 and not the specific prefix of the company (as it was done in the past, when Bezeq had a monopoly in this field). Because these companies have an extensive infrastructure of links abroad, the majority of them also provide Internet services.

There are currently four companies in Israel which offer cellular communication service: Pelephone, Cellcom, Partner Communications and Mirs. The services which those companies provide have long ago passed only the bounds of vocal conversations and currently provide also SMS Text messaging, Videoconferencing and Broadband Internet access.

There are currently two companies in the market of multichannel television. Hot (which provides television services through an underground infrastructure of cables) and Yes (which provides television services through satellite transmissions). The cables company has an advantage over the satellite company due to a permit granted to it from the communication office, which enables it to provide full bidirectional communications (for example the ability to provide Video on demand services).

There are currently only two commercial channels on the Israeli television – Channel 2 and Channel 10. There also exist several niche channels which make their earnings from TV advertisements, such as: Israel Plus, Music 24, and the Israeli shopping channel. Additionally, Channel 1, which belongs to the Israel Broadcasting Authority, can finance itself partially with the help of a few announcements, although most of its budget comes from the payment fees every house in Israel which has a television set pays annually. Channel 10, in contrast with Channel 1 and Channel 2, circulates its broadcasts to the public only by means of cables infrastructure and satellite infrastructure, without broadcasting on regular air waves; thus, they have a smaller amount of potential viewers.

The highest speed available nowadays to the domestic Israeli internet user is 100MBit in download and 2MBit in Upload—which is provided by Hot.[2][3]

In the mid-first decade of the 21st century, mobile telephone numbers were changed from six to seven digits and prefixes/area codes were consolidated to reflect the need for the increasing quantity of subscribers.

Also note Paltel, which provides mobile telephone service in the Palestinian Authority. Its area code/prefix is 059.