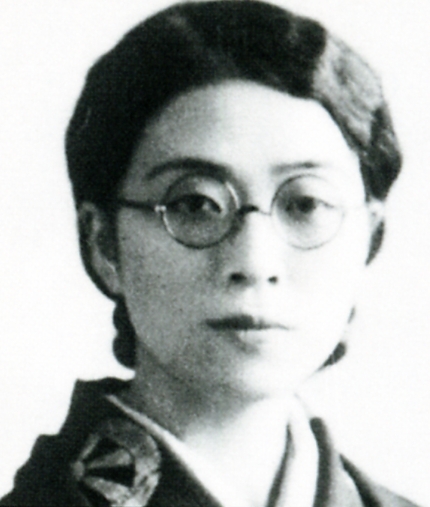 Kawakami Kikuko was born in . She graduated from Heijo Higher Girls' School and from the vocational course at Yamawaki Higher Girls’ School. In 1924 she accompanied her husband to , then under Japanese rule, and lived there until 1931.

In 1927, the "" awarded her a prize for her novel, "Aru Minikui Biganjutsu-shi" (An Ugly Beautician), which it then ran as a serialized novel in the newspaper.

After her return to Japan in 1931, she and her retired husband moved to Kamakura, , so that she could receive medical treatment for an illness contracted in Korea. She continued to live in Kamakura until her death in 1985.

While living in Kamakura, she had the opportunity to make the acquaintance of some of the Kamakura literati, including , and (who taught her "tanka)." Some of her poems were accepted by .

In 1936, Hayashi and Kawabata encouraged Kawakami to publish "Fuyubi no Kage" ("Shadow of a Winter's Day"), "Saigetsu" (Time and tide), and "Metsubo no Mon" ("Gate of Ruin") in "", a major monthly . All three stories were acclaimed by , and "Metsubo no Mon" was awarded the eleventh Bungakukai Prize, and was nominated for the 4th .

Following this recognition, Kawakami wrote a number of novels in quick succession, including "Hikari Honokanari" (Faint Light), "Biko" ("Dim Light"), and "Hanazono no Shosoku", published in "Bungakukai". Her style was objective and unemotional, and she depicted the ever-increasing oppression under Japan's growing militarism.

After , Kawakami withdrew from literary activity, but in her later years published "Kagero no Banka" ("Elegy on Mirage").