It is a deciduous, much branched flowering shrub growing to 0.1–1 m tall, rarely up to 1.5 m. The habit is variably upright to sprawling or prostrate, but stems are often ascending especially those stems with many long branches. The bark of older stems is shreddy with long thin strips. The plants are densely leafy, the leaves are divided into five or seven (occasionally three or nine) pinnate leaflets. The leaflets are linear-oblong, 3–20 mm long, with entire margins and more or less acute ends. The foliage (both leaves and young stems) is pubescent, variably covered in fine silky, silvery hairs about 1 mm long. The flowers are produced terminally on the stems and are 2–3 (–4) cm across, buttercup-shaped, with five petals and 15–25 stamens; the petals are pale to bright yellow (orange to reddish in some western Chinese populations). The fruit is a cluster of achenes covered with long hairs. The species is variably dioecious or bisexual; flowering is typically from early to late summer. It is normally found growing in moisture retentive soils in swamps and moist rocky areas.[1][2][3][4][5][6]

There are two subspecies:[7]

The species is also occasionally known as Tundra-rose and Widdy. 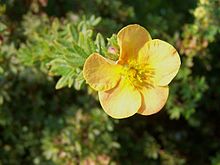 A cultivar with orangey flowers 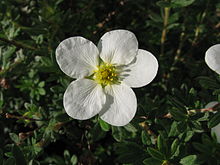 Shrubby Cinquefoil is a popular ornamental plant throughout the cooler regions of Europe, the United States and Canada. Different cultivars are variable with flowers ranging from white to yellow, orange and pink, but they are all hardy plants that produce flowers for much of the summer. The flowers are always small, flat, and round, but there are many dozens on each bush. It is very often used by cities and businesses for landscaping because of its hardiness and low maintenance. It was introduced into cultivation in the 18th century, but many of the modern cultivars, particularly those with orange or red flowers, derive from collections by Reginald Farrer in western China in the early 20th century.[6] Plants are most often still grown and sold under the old name Potentilla fruticosa.

The Cinquefoil with all its characteristics of small leaves, delicate flowers, and orange to brown flaky bark make it a delightful Bonsai and is very popular in Japan and is gaining popularity in Europe.[14]

Over 130 cultivars have been named; some of the more recommended current cultivars include:[6][15][16]