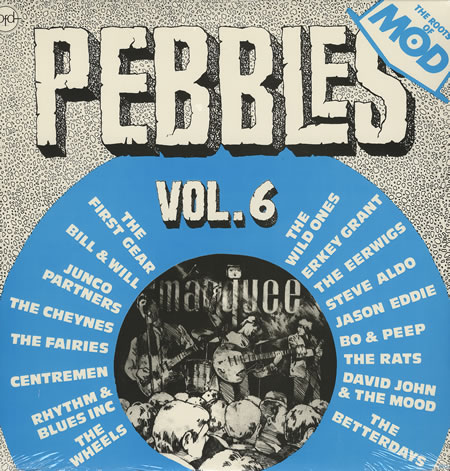 Although the "Pebbles, Volume 6" CD has completely different music, most of the tracks on this album were reissued in 1996 on CD by as "". For convenience, information on this CD is also included so that a comparison can be easily made between the tracks on these two highly similar albums.

As with the first five volumes of the , omitted some tracks on the LP in the reissue of the album as . In this case, two excellent covers on the LP are not included on the CD: "Leave My Kitten Alone" by and the classic, "Here 'Tis" by . Additionally, "Singing the Blues" by the Rats is omitted, though the performance of this song is included on the CD in place of their song on the LP.

The following information was taken primarily from the liner notes on "". Twink was one of the members of the Fairies, an under-appreciated British band; Twink would later be one of the founding members of a very different band, .

"Leave My Kitten Alone" is a celebrated Beatles rarity that is one of the standout tracks on the first Beatles Anthology collection. This version of the song was released in 1964 and features a young .

The real name of the front man for is , the brother of , a pop star in the late 1950's. Their experimental treatment of "Singing the Blues" was released in the U.S. by in June 1966.

The music by was recorded in 1964, and the band is mainly the plus others that might have included and ; this is an unexpectedly tuff treatment of the well known ballad.