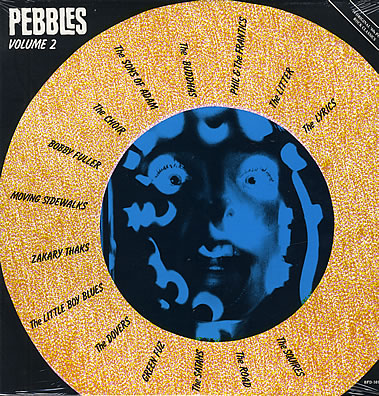 This was the first new Pebbles album that was released on , in 1979. kept the LP in print for many years.

issued this volume in CD format in 1992. Although having a different cover, the two formats are largely the same album and even have similar catalogue numbers.

Omitted Tracks on the CD

When issued the early volumes of CDs, they omitted some tracks from the corresponding LP for the stated reason that they were already widely available on other anthologies. As on Volume 1, the song by , "Go Ahead" is omitted from the CD, as is the final song on the LP, a by , who had the lead track on Volume 1. (However, the song was included on one of the Pebbles CD's, "Pebbles, Volume 3"). All of the other tracks on the LP are included on the CD, although the two songs by are swapped, and the song has been slightly re-attributed.

This album includes a song by ; of was a member of this band.

The first track, by has the same theme and even some of the same lyrics – e.g., "Can you guess my name?" – as the Stones' "" that was released several years later.

Three of the core members of The Choir would later form , with as the lead vocalist; a second song by this band is included as a bonus track on the CD.
would later have a national hit as , with "I Fought the Law (but the Law Won)".

"Feathered Fish" was written by Arthur Lee, and the band included Michael Stuart, who went on to join Lee in Love. An earlier line-up also included , later of .

As on "", "Pebbles, Volume 2" includes a curiosity featuring a well-known band: in this case, a genuine radio commercial with supplying a demonstration.

Side 1 of the LP closes with the beloved, minimalist "Green Fuz".