The Princess Mary, Duchess of Gloucester and Edinburgh (25 April 1776 – 30 April 1857) was a member of the British Royal Family, the eleventh child and fourth daughter of George III.

She was married to Prince William Frederick, Duke of Gloucester and Edinburgh.

Princess Mary was born, on 25 April 1776, at Buckingham Palace, London. Her father was the reigning British monarch, George III. Her mother was Queen Charlotte, the daughter of Charles, reigning Duke of Mecklenburg-Strelitz.

Mary was christened on 19 May 1776, in the Great Council Chamber at St. James's Palace, by Frederick Cornwallis, The Archbishop of Canterbury. Her godparents were: 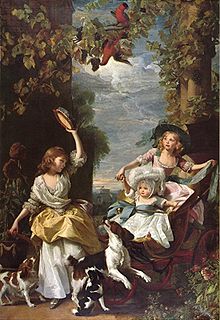 Mary at left, aged nine, with her two younger sisters Sophia and Amelia in 1785. Painted by John Singleton Copley 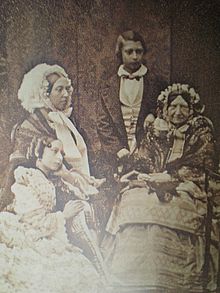 Mary danced a minuet for the first time in public at the age of sixteen in June 1791, during a court ball given for the king's birthday.[2] In the spring of 1792 she officially debuted at court.[2] She was considered to be the most beautiful of the six daughters of George III. Around 1796 Mary fell in love with the Dutch prince Frederick, while he and his family lived in exile in London. Frederik was a son of William V, Prince of Orange, the Dutch stadholder, and younger brother to the future King William I of the Netherlands. However Frederik and Mary never wed because George III stipulated that her elder sisters should marry first. In 1799 Prince Frederik died of an infection while serving in the army, and Mary was allowed to go into official mourning.

Mary's upbringing was very sheltered and she spent most of her time with her parents and sisters. King George and Queen Charlotte were keen to shelter their children, particularly the girls. Mary, however, married on 22 July 1816, to her first cousin, Prince William Frederick, Duke of Gloucester and Edinburgh, the son of George III's brother, Prince William Henry, Duke of Gloucester and Edinburgh, at the Chapel Royal in St James's Palace. On their wedding day, Mary's brother, The Prince Regent, raised the bridegroom's style from Highness to Royal Highness, an attribute to which Mary's rank as daughter of the King already entitled her.

The couple lived at Bagshot Park, but after William's death she moved to White Lodge in Richmond Park. They had no children together. Princess Mary was said to be the favourite aunt of her niece, Queen Victoria.

Princess Mary was quite close to her eldest brother, and she shared his dislike toward his wife Caroline of Brunswick. When the latter left for Italy, Princess Mary congratulated her brother "on the prospect of a good riddance. Heaven grant that she may not return again and that we may never see more of her."[3]

Princess Mary was the longest-lived (at 81 years) and last survivor of George III's fifteen children. Of those fifteen issue, thirteen lived to adulthood. She was also the only one of George III's children to be photographed. She died on 30 April 1857 at Gloucester House, London.

As of 1789, as a daughter of the sovereign, Mary had use of the arms of the kingdom, differenced by a label argent of three points, the centre point bearing a rose gules, the outer points each bearing a canton gules.[4]