How the West Was Won (film)

How the West Was Won (film)

Infobox_Film
name = How the West Was Won 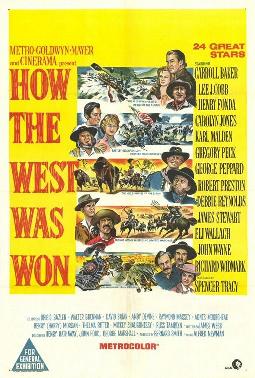 
"How the West Was Won" is a 1962 epic Western film which follows four generations of a family (starting as the Prescotts) as they move ever westward, from western state to the . Filmed in the curving process, the movie is set between and .

The movie consists of five segments, three directed by ("The Rivers", "The Plains" and "The Outlaws"), and one each by ("The Civil War") and George Marshall ("The Railroad"), with transitional sequences by the uncredited . The screenplay was written by John Gay (uncredited) and James R. Webb. Popular western author wrote a novelization based on the screenplay. [ [http://www.louislamour.com/novels/howthewest.htm How the West Was Won - A novel by Louis L'Amour ] ]

In 1997, "How the West Was Won" was selected for preservation in the United States by the as being "culturally, historically, or aesthetically significant".

Linus Rawlings (James Stewart) is returning east to to trade his furs when he meets a group of settlers led by Zebulon Prescott (Karl Malden) heading west down the to the . His daughter Eve (Carroll Baker) and Linus are attracted to each other, but he isn't ready to settle down, and he leaves her.

Linus stops at an isolated trading post run by a murderous clan headed by "Colonel" Hawkins (). Linus is betrayed when he accompanies pretty Dora Hawkins () into a cave to see a "varmint". She stabs him in the back and pushes him into a deep hole. Fortunately, Linus is not seriously wounded, and is able to rescue the Prescott party from a similar fate. The bushwhacking thieves ( was one), including Dora, are dispatched with rough frontier justice.

The settlers continue down the river, but their raft is caught in , and Zebulon and his wife Rebecca () drown. Linus, finding that he cannot live without Eve, reappears and marries her, even though she insists on homesteading at the spot where her parents died.

Eve's sister Lily (Debbie Reynolds) chooses to go to , where she finds work performing in a . She attracts the attention of professional gambler Cleve Van Valen (Gregory Peck). After overhearing that she has just inherited a California gold mine (and to avoid paying his debts), Cleve joins the that will take her there. He and wagonmaster Roger Morgan (Robert Preston) court her along the way, but she turns them both down, much to the dismay of her new friend and fellow traveler Agatha Clegg ().

Surviving an attack by Indians, Lily and Cleve arrive at the mine, only to find that it is now worthless. Cleve leaves. Lily returns to work in a dance hall in a literal "Camp Town", living out of a covered wagon. Morgan finds her and again proposes marriage in a rather unromantic way. She tells him, "No, not ever."

Later, Lily is singing in the music salon of a . By chance, Cleve is a passenger. When he hears Lily's voice, he leaves the poker table (and a winning hand) to propose to her, telling her of the opportunities waiting in the rapidly growing city of . She accepts.

Linus joins the Union army in the . Despite Eve's wishes, their son Zeb () eagerly enlists as well, looking for glory and an escape from farming. Corporal Peterson () assures them the conflict won't last very long. The bloody shows Zeb that war is nothing like he imagined and, unknown to him, his father, Linus, dies there. He encounters a similarly disillusioned Confederate () who suggests deserting, to which Zeb agrees.

However, by chance, they overhear a private conversation between Generals () and (). The rebel realizes he has the opportunity to rid the South of two of its greatest enemies and tries to shoot them, leaving Zeb no choice but to kill him. Afterwards, Zeb rejoins the army.

When the war finally ends, he returns home, only to find his mother has died. She had lost the will to live after learning that Linus had been killed. Zeb gives his share of the family farm to his brother and leaves in search of a more interesting life.

Following the daring riders from the and the construction of the transcontinental telegraph line in the early 1860s, two ferociously competing railroad lines, the and the , one building west and the other east, open up new territory to eager settlers.

Zeb becomes a lieutenant in the U.S. cavalry, trying to maintain peace with the Indians with the help of grizzled buffalo hunter Jethro Stuart (), an old friend of Linus. When ruthless railroad man Mike King () violates a treaty by building on Indian territory, the Indians retaliate by stampeding buffalo through his camp, killing many, including women and children. Disgusted, Zeb resigns and heads to Arizona.

In San Francisco, widowed Lily auctions off her possessions (she and Cleve had made and spent several fortunes) to pay her debts. She travels to Arizona, inviting Zeb and his family to oversee her remaining asset, a ranch.

Zeb (now a marshal), his wife Julie () and their children meet Lily at Gold City's train station. However, Zeb also runs into an old enemy there, outlaw Charlie Gant (). When Gant makes veiled threats against his family, Zeb turns to his friend and Gold City's marshal, Lou Ramsey (), but Gant is not wanted for anything in that territory, so there is little Ramsey can do. Zeb decides he has to act rather than wait for Gant to show up someday. Suspecting Gant of planning to rob an unusually large gold shipment being transported by train, he prepares an ambush with Ramsey's reluctant help. Gant and his gang (one member played by ) are killed in a shootout. In the end, Lily and the Rawlings travel to their new home.

A short epilogue shows in the early 1960s, with the famous four-level freeway interchange downtown, indicating the growth of the West in 80 years.

"How the West Was Won" is one of only two dramatic feature films (the other being "") made using the three-strip process. Although the picture quality when projected onto curved screens in theatres was stunning, attempts to convert the movie to a smaller screen suffer from that process's technical shortcomings. When shown on in a print made from the original three-strip version, the joins between the three frames are clearly and sometimes glaringly visible; when seen in format the actors' faces are nearly indistinguishable in long shots. There have been efforts to put the three parts of the image together in a better way, and to make the Cinerama image look better on a flat screen, led by HP. [ [http://www.hpl.hp.com/news/2006/apr-jun/movie.html HP Labs - Movie makeover : HP and Warner Bros. give old movies new life
] ] The aspect ratio of Cinerama was , although Warner's new DVD release of the film claims the ratio was 2.89:1.

complained about having to dress such huge sets since Cinerama photographed a much wider view than the standard single camera process to which directors had become accustomed.

Stuntman Bob Morgan, husband of , was severely injured and lost a leg during an accident while filming. [http://www.snopes.com/movies/films/westwon.htm]

The film would later inspire an ABC television series of the same name.