The Outer Circle was a railway route in London operated in the late 19th and early 20th centuries over tracks which are now mainly owned by Network Rail but include parts of the London Underground. Although not actually a circle or even a complete circuit, the route circumnavigated the northern suburbs and centre of the Victorian capital and the name was used to reflect its similarity to the Inner Circle and Middle Circle routes with which it partly shared tracks.

The Outer Circle route was first operated by the North London Railway (NLR) and the Metropolitan District Railway (MDR) over their own tracks and also those of the London & North Western Railway (L&NWR), the West London Railway (WLR) and, for a time, short sections of the London and South Western Railway (L&SWR) and London, Brighton and South Coast Railway (LB&SCR). The Outer Circle used existing rail lines and shared operations with the other services provided by the railway companies.

The service commenced operations on 1 September 1867. It initially ran between the NLR's terminus at Broad Street (now demolished) in the City of London and Kensington (now Kensington (Olympia)). From Broad Street the Outer Circle ran northwards via the NLR's viaduct to Dalston Junction then turned west to follow the line through Highbury (now Highbury & Islington) and West Hampstead to Willesden Junction. At Willesden Junction, the route joined the WLR tracks heading south to Kensington.

On 2 January 1868 the route was extended to continue south from Kensington over the tracks of the West London Extension Joint Railway through West Brompton and across the River Thames to connect to the L&SWR's line north-west of Clapham Junction then pass through Battersea and back across the Thames via the LB&SCR's tracks to terminate at Victoria station.

The Kensington to Victoria section of the Outer Circle service was short-lived. When the MDR opened a link line from Earl's Court to the WLR south of Kensington station (by then renamed Addison Road) on 1 February 1872, a much shorter route between the two stations became available via the MDR's southern section of the Inner Circle. Outer Circle trains began running at that time to the MDR's eastern terminus at Mansion House.

The service continued in this form for the next 36 years until, on 1 January 1909, the route was shortened to terminate at Earl's Court. In 1912, the route was truncated again and was effectively ended; through services from Broad Street ended and the section of the WLR between Willesden Junction and Earl's Court operated as a shuttle service.

Passenger services on the WLR were ended on 19 October 1940 following bomb damage to stations on the line.

As just one of a number of services operated by the NLR and MDR, the Outer Circle route did not appear separately on rail maps of the period. Although the service had effectively been discontinued be the time the first coordinated tube maps were produced at the start of the 20th century it is unlikely that the route would have been specifically indicated - the Inner Circle itself was never specifically shown on the map and only began to be shown from 1947 as the Circle Line. The section between Willesden Junction and Uxbridge Road did briefly appear on tube maps in 1939 and 1940 to mark the non-Underground connection between those two stations; it was labelled as a Great Western Railway and London, Midland and Scottish Railway route. 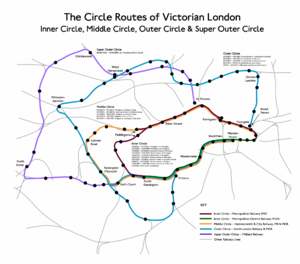 The Outer Circle (coloured blue) and other circular routes

The following stations were served at various times by the Outer Circle route: